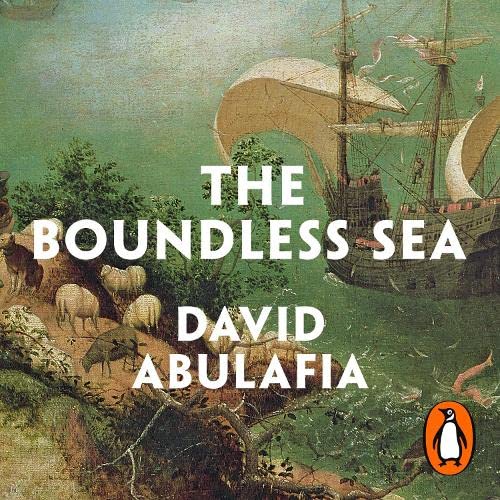 By: David Abulafia
Narrated by: Jonathan Keeble
Try for £0.00

From the award-winning author of The Great Sea, a magnificent new global history of the oceans and of humankind's relationship with the sea.

For most of human history, the seas and oceans have been the main means of long-distance trade and communication between peoples - for the spread of ideas and religion as well as commerce. This book traces the history of human movement and interaction around and across the world's greatest bodies of water, charting our relationship with the oceans from the time of the first voyagers. David Abulafia begins with the earliest of seafaring societies - the Polynesians of the Pacific, the possessors of intuitive navigational skills long before the invention of the compass, who by the first century were trading between their far-flung islands.

By the seventh century, trading routes stretched from the coasts of Arabia and Africa to southern China and Japan, bringing together the Indian Ocean and the western Pacific and linking half the world through the international spice trade. In the Atlantic, centuries before the little kingdom of Portugal carved out its powerful, seaborne empire, many peoples sought new lands across the sea - the Bretons, the Frisians and, most notably, the Vikings, now known to be the first Europeans to reach North America. As Portuguese supremacy dwindled in the late 16th century, the Spanish, the Dutch and then the British each successively ruled the waves.

Following merchants, explorers, pirates, cartographers and travellers in their quests for spices, gold, ivory, slaves, lands for settlement and knowledge of what lay beyond, Abulafia has created an extraordinary narrative of humanity and the oceans.

From the earliest forays of peoples in hand-hewn canoes through uncharted waters to the routes now taken daily by supertankers in their thousands, The Boundless Sea shows how maritime networks came to form a continuum of interaction and interconnection across the globe: 90 per cent of global trade is still conducted by sea. This is history of the grandest scale and scope, and from a bracingly different perspective - not, as in most global histories, from the land but from the boundless seas.

What listeners say about The Boundless Sea

to be one of the best histories I've read, the story of human sea travel is vast and still goes on, I'll listen to this again and again. Brilliant

Fantastic content, great narrator, but why is there no pdf to show maps that support the text? Map images would be a very worthwhile addition to support the audiobook.

more of an encyclopedia than a book to read. Very dry extremely detailed. requires great tenacity.

Wonderful story with a narration with issues

An amazing, absorbing story of the world’s history based on the oceans and those who travelled them. The only down points were the fact the narrator continually mispronounced non-European words throughout.

Outstanding , a masterpiece of historical proportions.

The sheer breadth of knowledge that is conveyed to the reader in a facile and flowing prose is a wonder in itself .
A gripping and thrilling account of maritime empires that have shaped history.

Highly recommended and I cannot wait to embark on his other grand opus, The Great Sea

The narrator, Jonathan Keeble, has a nice voice. Unfortunately, he is completely incapable of narrating a book for adults. Every clause and every phrase is thoughtlessly broken up, as though he is reading to children. The tone overall is completely inappropriate and makes this very valuable work unlistenable. Deeply disappointing.

I found this a fascinating book from beginning to end. It has given much more breadth and depth to my understanding of history and where we stand today. Thank you to the author for undertaking such a mammoth task. Now I can listen to the world news with a more rounded approach!

A writer at the peak of his powers

A beautifully written (and read) magisterial account of human use and abuse of the oceans. From the extraordinary Polynesian journeys to the age of the container ship Abulafia tells how we have interacted with the watery world. Essential reading.

The sheer amount of fascinating information in this book is an achievement. I listened to it twice in a row it was so good. Highly recommended.
Jonathan Keeble has a lovely voice—smooth as silk. His pronunciation of foreign words (such as Chinese, Japanese, Russian, Spanish, etc...), though, is woeful. I understand this book has a lot of foreign words, but just a little bit of preparation on how to pronounce often repeated, foreign words, would have been appreciated.
Otherwise, I cannot recommend this book enough.

A fantastic and interesting history of the Oceans.
superbly written and excellently narrated!
Top notch!

This book offers no theory explaining human interactions with the oceans, only disconnected narratives, most of them unrelated to the oceans whatsoever. The narrator does a excellent job though