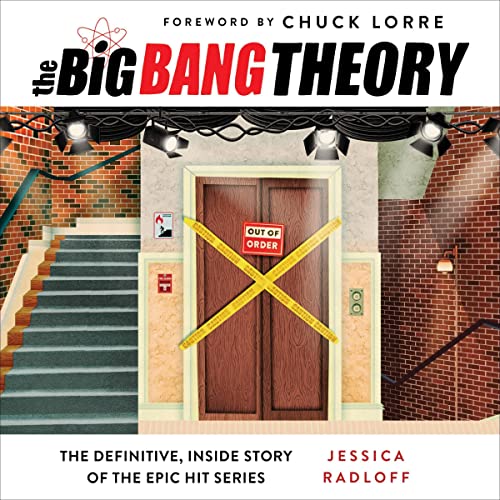 The definitive, behind-the-scenes look at the most popular sitcom of the last decade, The Big Bang Theory, packed with all-new, exclusive interviews with the producers and entire cast.

The Big Bang Theory is a television phenomenon. To the casual viewer, it’s a seemingly effortless comedy, with relatable but deeply unique characters tackling real-life issues—a kind of visual comfort food for its millions of dedicated fans. But the behind-the-scenes journey of the show from a failed pilot to a global phenomenon is a riveting story that even the most die-hard fans don’t know in its entirety.

The Big Bang Theory: The Definitive Oral History is a riveting, entertaining look at the sitcom sensation, with the blessing and participation of co-creator Chuck Lorre and executive producer Steve Molaro, as well as Johnny Galecki, Jim Parsons, Kaley Cuoco, Simon Helberg, Kunal Nayyar, Melissa Rauch, Mayim Bialik, and more. Glamour senior editor Jessica Radloff, who has written over 200 articles on the series (and even had a cameo in the finale!), gives listeners an all-access pass to its intrepid producing and writing team and beloved cast. It’s a story of on-and-off screen romance told in hilarious and emotional detail, of casting choices that nearly changed everything (which even some of the actors didn’t know until now), of cast members bravely powering through personal tragedies, and when it came time to announce the 12th season would be its last, the complicated reasons why it was more difficult than anyone ever led on. Above all else, The Big Bang Theory tackled issues no other sitcoms would touch, which underwent a brilliant metamorphosis during its 279 episodes that mirrored the changing attitudes of America itself. These are the stories shared here, with the intimacy and the reverence the show has earned.

"A fun look at the sitcom megahit. . . Entertaining in its own right, this book examines the how and why behind the success of a landmark series."—Kirkus Reviews

"I'm so excited for fans to finally see my behind-the-scenes Polaroids for the first time. These photos are very special and super personal, so knowing Jess was taking such care with them, as she did with this book, was very comforting to me."—Kaley Cuoco

"There is no one more enthusiastic, more knowledgeable, more competent, or more dialed into the pulse of TBBT than Jessica Radloff. Jessica cultivated deep and rich relationships with all of us on TBBT over many years so that she can bring you the most detailed, delightful, and authentic TBBT book there will ever be. Bravo, Jessica, for putting up with us for so many hours of discussion, reminiscence, laughter and tears; thank you for being a part of our show's impact with this thorough and exceedingly well-researched work of art!"—Mayim Bialik

What listeners say about The Big Bang Theory

A must listen for big bang fans!

A real Gem for true fans

For the long term fans this is what was needed, a refreshing, entertaining, funny update we all needed, it fills in all the gaps and explains some of the mysteries, a great job well done.... as was the whole series

if you love BBT then you must read this!!!

if you love Big bang theory then you must read this!!! and read to look at the accompanying PDF

The first ten hours are really interesting, but towards the end the backslapping and tears get a bit much.
Also the actor who voices Johnny Galecki make him sound like a creep, which I’m sure he is not.

enjoyed but the voice acting was hard to listen to. just not as expected

Listened intently, great book for all Big Bang fans. However the actors voicing the BBT cast left me cringing, especially the guy voicing Jim Parsons. All I could think of was through the keyhole”who lives in a house like this”. Despite that lots of facts and interesting anecdotes.

A must for fans

Loved it. Amazing insite on the show, A must for all fans of the show

Thank you for those Audio book.

I’m a big fan of the show, but was a bit dubious as to how this book could live up to my expectations. It surpassed them. Loved all of the snippets from behind the scenes and stories from members of the cast and crew. Brilliant!

A must read (listen) for every fan of the show !

Really great way to look behind the scenes of the production process. Highly recommended!

I love big bang theory so was excited to read the BTS about the actors and show runners. The only thing that made it sort of difficult was the fact that voice actors were used to narrate instead of the actual people from the cast. Since most fans know the voices of the actors, it made it just a little weird to listen to other people narrating their stories. But otherwise, the story was great and Jessica Radloff did a great job executing the book!

In full disclosure, I’m only about halfway through this book. That being said I am struggling to get through it. I love the show and was so excited for this book. I was expecting it to be written similarly to As You Wish by Cary Elwes and I suppose that was a mistake on my part. The first few chapters were really great and intriguing!! Fun behind the scenes stories and experiences that I had never heard about. However, it quickly went from fun stories to the stars celebrating themselves (which is deserved), “tooting their own horns” and talking about how great they are. We all know they’re great and they do deserve praise but I didn’t realize that’s what the entire book was going to be. They really lost me during the 45!!!! minute chapter about Johnny and Kaley’s relationship. Maybe I misinterpreted what this book was going to be about but hopefully it goes back to fun facts and stories about the show.

Such a Fun Listen! I Had a Blast!

As a hardcore fan of TBBT, this book made me love and appreciate the show and the actors even MORE…who knew that was even possible? I really enjoyed all the factoids and tidbits, as well as the behind-the-scenes stories. I would’ve liked to have heard something about Kripke’s backstory or the story behind who came up with Mystic Lords of Ka’a, but they include so many other things, you really don’t miss it. My one minor gripe is with the performance. They obviously had the same voices reading for more than one individual, so when those individuals happened to be speaking back to back, sometimes I had to rewind to catch who is actually supposed to be talking. And it felt like the Jim Parsons narrator was doing a caricature more than an impression. I got used to it though, over the course of 18 hours. Otherwise, well-written, informative, and just a fun listen! I wish other shows would do a book like this; I’d love a “Seinfeld,” “Dexter,” or “Friends” version!

A must for any TBBT fan

If you love The Big Bang Theory like I do, you will love the backstories on everything from initial casting, (some surprises there!) writing, guest stars, personal lives of the stars and much more. Even though the interviews are performed by voice actors, I felt like I was visiting old friends hearing the things the actors shared with Jessica in her interviews. Five stars all around!

As an avid BBT watcher, the whole concept of interviews and plot breakdowns was intriguing and wonderful to listen to. I rated Performance with 4 stars because of the guy who voiced for Jim Parsons and maybe others - he was awful. Otherwise, I loved it!

As an audiobook, a collection of statements by different people isn't really "narrated" per se... It's read aloud. There's not much storytelling here, as Radloff prefers to have the subjects talk about the show in their own words. Something gets lost in translation, however, when the book has probably 50 different sources, but only 4 or 5 voices to read those statements. Every quote has to be prefaced by the name of the person who said it. In an audiobook, there's no getting around that unless you had every single person interviewed doing their own VO. (and even then, you'd need an introduction to identify each speaker at least once.
So much time is taken up with, "Jim Parsons..." followed by someone kind of imitating his voice. Frankly, it's annoying. The readers vary in quality, also. There were several mispronunciations in the course of the book, and one can't help but wonder WHERE the editor was for "Epi-TOME" or "ig-NOR-ent" or referring to Judging Amy's lead actress as "Amy Brennan".
My understanding is that Radloff is a writer. Well, in her portions of what's been written (ie: NOT the direct quotes) there is a shocking amount of repetition. Things are "SO exciting/stressful/difficult", or they're "REALLY nice/exciting/stressful/difficult" The same descriptors are used over and over and over. It begins to sound like a middle-schooler's oral report where they're trying to pad out the word count.
There are a few interesting stories contained within, however, and that's why I stuck with it the whole way through. I'm not sure that if Johnny Galecki tells a story, and then Melissa Rausch tells the same one essentially the same way that it makes for compelling reading, though. After a while, you start to feel like you already HEARD that story before, and you've lost your place in the text!
Also, there are about 30 minutes of just acknowledgements at the end. I'll copy to listening to it when I could have shut it off, but I honestly thought with that much time left that there would be some kind of denouement. There was not... Just a long list of thank you's that started to sound like Radloff was describing finishing some epic work.
It's not epic. Sure, it's long, but this and anticlimactic bang of middling size.

I did not want it to end.

I really enjoyed this. It kept moving. I love big bang theory. It was great to learn all about how it came to be.

I would have preferred it was written as a story versus a series of QAs on each topic. I don’t know if it’s the readers, or the actors replies. Far too much self effacing comments that smack of insincere. Also, just how they talk drove me crazy. The story was s great and lots of things from behind the scenes. Great insight behind the “why” of certain episodes. With only a few hours left I’m not sure I can get through though. I recommend downloading a sample first.

amazing book of a show that I watched from day one..if you ɔove Big bang theory..you will love this book!

This audio book did not disappoint. I loved every story and interview with the cast and crew and family. thank you!