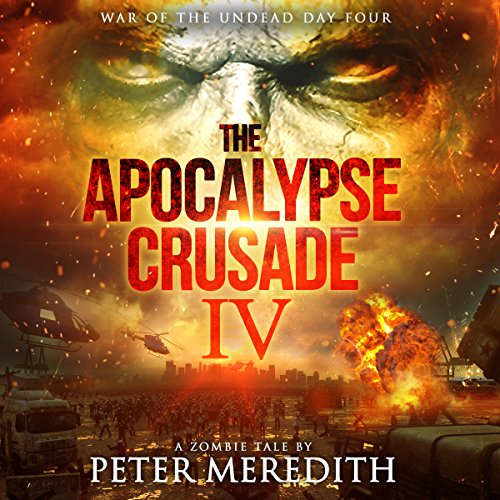 As if a zombie apocalypse wasn't bad enough, the country is also in the throes of a second Civil War. Massachusetts has closed its borders to everyone, including the 101st Airborne Division and five million desperate refugees. It's an act of rebellion that the President won't stand for, and with nuclear missiles flying by the hundreds in China, he mulls the idea of using nukes on American soil for the first time.

And his nuclear sites aren't just centered on Massachusetts, either. Anna Holloway and Lieutenant Eng are loose in Baltimore with vials of infected blood, the city of Philadelphia is crumbling under a terrific storm of undead, and half of Pennsylvania has fallen. Although the call to arms has been answered by thousands of men and women, it won't be enough.

The fate of the country rests on a stout few: FBI Agent Katherine Pennock who has to hunt down Anna and Eng before they create more zombies; Sergeant Troy Ross of the 101st who finds himself the linchpin in an epic battle involving millions; and Doctor Thuy Lee who holds the key to a cure somewhere in her brilliant mind. Unfortunately she is still trapped in the Zone with legions of undead and if there is any hope of finding the cure, she first has to live through day four of the apocalypse.

What listeners say about The Apocalypse Crusade Day 4

Better than number 3 in the series but not as good as 1 or 2. If the series continues I will continue to listen.

Stop the planet, I want to get OFF

Absolutely loved The Apocalypse Crusade book 4, by the remarkable Peter Meredith, a REAL rollercoaster ride of a book, with a fabulous narrator, (and believe me, poor narration kills a book) I'm definitely purchasing book 5 TODAY.

‘Day 4’ of the apocalypse is really good and saves the series! Don’t give up after the ending of day three!

To those who have listened to or read the first three days of the apocalypse, you may have been furious and disgusted if it’s extremely week attempt of an ending. The third day of the apocalypse was far beyond unfinished, and if I didn’t have an extra Audible credit laying around, I wouldn’t have listened to the fourth day; I’m sure glad I did! If you’ve experienced the first three days and enjoyed them, as I have, you may have been frustrated, clenching your fists, and using a lot of four letter words. There are countless story lines incomplete plot development and characters in need of what this book delivers!

Day four completes many of the story lines of the first three days and finishes with the only ending appropriate to this series. T ‘Hitchcock Ending” of this book, which, in my opinion, is the only rational way to wrap things up. The deepening plot and character development of the fourth day of the apocalypse saves the whole series from a painful and torturous death and a waste of everyone’s time. The narrator is amazing in his delivery of the narrative, even though he doesn’t have a completely different voice for every character. The simultaneous story lives make this a minor detail worth no consideration. This series could have been dull without the amazing narration by the same person throughout all of the books. Some of the previous days were more interesting and captivating than day four... but maybe that’s because I’ve come to accept that smart child zombies creating traps and adult zombies, who only keep a slim part of their humanity by downing huge amount of opiates and Valium, are just as normal as someone mowing their grass when it’a too tall. Meredith’s idea of zombies is completely different than any other tale or story of zombies I’ve ever seen, and it works like a charm.

The highlights: BUY THIS BOOK if you like the first three days of the apocalypse. You will not be disappointed in the least!

there are so many horrible inconsistencies in this book that it would take me over an hour to go through the all this author obviously has no idea how the military or the CDC work.

love the day by day premise

Fantastic series for the zombie fan. I wonder how long it will go. Can't wait for day 5 or maybe day 500!

Great installment as always! I just Can’t wait till the next book in this series!!!

this series is a fast read full of Adventure and keeps getting better. loved it!

for three books I put up with the bad writing, shallow and unbelievably inconsistent characters, and lack of coherent plot because well I like zombies. I was going to quit but this book got better reviews so I thought why not. instead of getting better it just got overtly political. don't waist your credits on this trash

Let the haters hate and just enjoy the bloodbath wrought by the hordes of infected and the idiocy of our leaders.

Book 4 is really getting deep into the stories on the main characters and adding more characters to the mix. I really like the little side stories of people that aren't relevant to the main storyline.