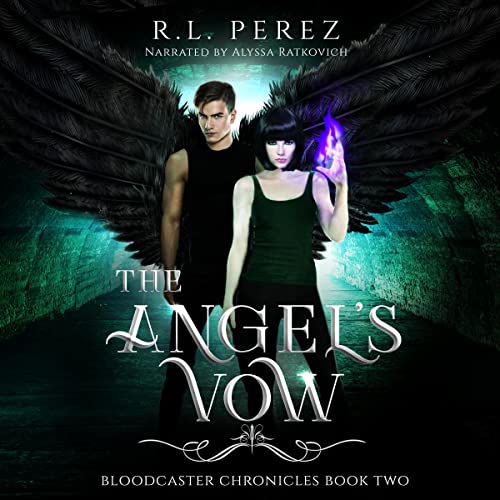 He's an angel. She's a demon. Their love was never meant to be.

Vince Delgado has become a Reaper - a dark angel. While adjusting to his new life and new powers, he uncovers a shocking mystery: Someone is stealing magic from the souls of the dead.

Cora Covington struggles to fill her new role as demon coven leader. As she tries to quell the riots and unrest in the city, she discovers a new threat: Another Bloodcaster is among them. Someone as powerful as Cora.

When Vince and Cora finally reunite, the passion between them escalates. Though they want to be together, their enemies draw closer - until Vince and Cora realize their two conflicts are connected. But to defeat their enemies, they must set aside their feelings for each other and make sacrifices for their people.

Even if it tears them apart forever.

What listeners say about The Angel's Vow

Vince is now a Reaper, reapers are dark angels who preserve the magic in the universe and help the souls of the dead pass on. He is reunited with his mother, who is inducting him, but he struggles to fit in and understand his new role in life. He once again feels trapped and is yearning for Cora.

Meanwhile Cora has taken over the leadership of Damien’s demon coven, but is struggling with the demands that come with the position and keeping the loyalty and respect of the coven members. She misses her straight forward life as assassin and she misses Vince.

As both protagonists struggle with their new roles and responsibilities, a new threat in form of a power hungry bloodcaster rises and Vince and Cora are trying to unite Reapers, Demons and Time Keepers to fight off this foe and save the universe from annihilation.

Old friends are called upon, and new alliances have to be formed to save all realms from devastation.

In this book the emphasis seemed to be on Vince rather than Cora, and I became far more invested in his progression than in Cora’s. I really enjoyed this shift elevating the male protagonist to the lead character, though this may just be my interpretation and not intended. Never the less both Vince and Cora step up to the mark and they mature and develop into their roles and responsibilities, as does their love for each other.

As usual, all the characters, old and new, are well rounded and vividly brought to life and there is plenty of action, drama and some romance. This time the adventure leaves us on a cliff hanger with both of them facing a very uncertain future...

Alyssa Ratkovich continues as narrator, which provides continuity and I greatly appreciate. Once again she does a lovely job and changes her voice to distinguish between characters pretty well. I did criticise Alyssa about her male voices in the first book, so maybe I was a bit harsh then or she has improved or I’m more used to her voice – regardless, it was a pleasure to listen to the narration.

I received this book in audio-book format from the author and am leaving this review of my own volition.

This story keeps getting better and better. Turns it all the evil happening is because of one of Cora's long lost family members. Looking forward to the third book to see what happens next. Great writing and a very interesting and exciting story.

Book 2 of this UF shows us the reaper side of the magic and gives us more answers on the blood witch magic. It goes in a direction I did not see coming at all. Gives us some questions answered to the timeline and time keepers but leaves us with so many more we didn’t even know to ask before! The end gives us a small glimpse into book 3 and I can’t just not know what happens to the timeline next!

Better than the first book! Phenomenal!

"The Angel's Vow" is the second book in the Bloodcaster Chronicles. Cora is still on Earth leading her demon coven. Vince is in another realm trying to adjust to his new life as a reaper. Luckily for him, he still has his warlock abilities.

Someone is stealing the magic from the souls of the dead. When tragedy occurs on the other realm, Vince runs to Cora on Earth for her help.

I enjoyed "The Angel's Vow" more than the first novel, "The Demon's Kiss". The pulse pounding action, danger and suspense in this one keeps you on the edge of your seat! Cora and Vince both face perilous choices. I can't wait to find out how the story concludes!

This was a perfect continuation to the first book. It was fastpaced and action-packed, I listened with my breath held. It was an amazing twist, with who were the one killing and stealing the Reapers powers. And his involvement with the Demon War and history with Cora.. I cannot wait to see what happens next! Highly recommend this series so far.
The narrator did a great job in voicing all the different characters, so each had their own voice.

If you like witch, werewolf, vampires and time travel in the mixing pot then you like this. Really good solid story and character they evolve really well. A great job by who narrated it too. A real solid 2nd book in the seris.

As Vince and Cora try to adjust to their new roles a threat comes in the form of someone stealing magic from the souls of the dead and a bloodcaster. A book worth checking out.

Someone is killing Reapers and stealing their magic then when he gets into the Reaper realm Vince has to jump them to safety. He ends up at Cora’s coven but no one is safe especially Cora when the magic stealer confronts her she’s shocked to find out who he is.

I received this audio book for free in exchange for an honest review. I enjoyed this story and I recommend this story to others.

I can't believe all that ended up happening in this book and that ending is sooooooooooo intense! I do need the next book to find out what happens!

This is a great book. Love how Cora and Vince love each other but know they can't be together but are there to help one another. Can't wait to read the next one.

I’m finding the storyline very intriguing. Not been able to guess what is going to happen and because of this I am totally enjoying this series.
I feel it would be suitable for teenagers.
It contains a little lite romance, some violence and no course language.
The narrator does a great job, giving each character their own unique voice.
I’m totally enjoying the story line.

All I can say is wow. This book had a curve ball I didn't see coming. I feel for Cora she is trying to find a balance between her caring side and her fighter side. And Vince is is thing that he is make the wrong choice after another but you can see the choices are making him stronger. because with each choice he becomes of a fighter. I can't wait to see what happens next. I need to know were Cora's path takes her. and I want to what happens to Vince with his last choice he made.

This story is exciting, the characters, and the world they inhabit is fascinating.

The narration was ok

As families reunite and new powers are explored, new foes bring death knocking for Vince and the reapers as well as for Cora and her coven. As Cora and Vince fight against their attraction and fight to save their worlds, they must both deal with challenges in their new roles and unexpected suitors. A great continuation of book 1 that leaves you longing for book 3

can't wait to see how the next book is ! there's this far one more book and I'm ready to see how it ends

I listened to this book with my breath held. It is an action-packed story filled with untold danger and intrigue that will suck you into a riveting plot line that will keep you on the edge of your seat. I highly recommend this author to all lovers of action-packed fantasy stories filled with danger and a hint of romance. The narrator does an excellent job of bringing this story to life.

This was a great second book in the series! It leaves you waiting for the next book to see the outcome! Can’t wait to listen to next book. T L Perez keeps you interested and wanting to see what comes next and rooting for the main characters!