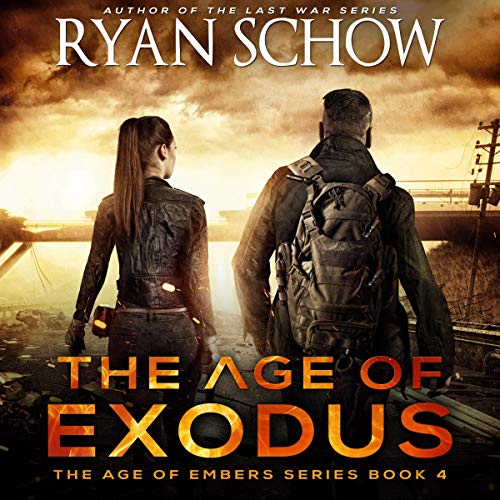 The Age of Exodus

The much anticipated fourth book in the highly acclaimed Age of Embers series is here! Brace yourself for the next blistering installment of this post-apocalyptic adventure series by best-selling author Ryan Schow! The Age of Exodus is perfect for fans of Matthew Mather, Jack Hunt, Mike Kraus, Boyd Craven, Kyla Stone, and James Hunt.

Tragedy has claimed its pound of flesh from the Chicago survivors. Homeless, low on supplies, and struggling to find weapons, the group weighs the dangers of squatting in Chicago against the merits of reuniting with Rock in California. No matter the choice they make, the weeks and months ahead will exact a devastating toll.

The measurement of such losses will be incalculable. Some will make it. Others will make their final stand. But who will they become along the way? And what will they risk for each other when all hell finally breaks loose?

The Age of Exodus is an emotional roller-coaster ride with plenty of peaks and valleys, a few shocking twists, a handful of well-timed laughs, and all-but-guaranteed loss of sleep. Before you head out with our survivors on the adventure of a lifetime, grab some caffeine, find a quiet place to listen, sit down, and hold on because the ride is about to get bumpy!

Please note: The Age of Embers Series can be listened to as a stand-alone series or in addition to The Last War Series. Both of these series are written in the same universe on the same timeline and some characters will overlap, especially in the series finale The Age of Defiance.

What listeners say about The Age of Exodus

Fantastic book. I was engrossed from start to finish. The book sure goes in for the shock factor. I was crying at the end.

MAN, OH MAN, WHAT A STORY. A WAKE UP CALL

I am revising my review which I wrote before I got to the end of this story. I have listened to many books, but nothing like this. I have been spoiled by stories in which good things happen to the main characters, but this story brought me back to reality. It make me wonder about what humanity can become, but looking back on history, I don't have to wonder about man's inhumanity to man

Kevin Pierce has done a great job of narrating this series. This book is sad, exciting, and suspenseful.. Please hurry up and release the next story. I have to admit this story scares me and make me wonder what our society will become if an EMP event or a similar event occurs.

I was listening to this on a road trip and had to pull over to write this review.

Narration: Kevin Pierce is nicknamed The Voice of the Apocalypse for a reason. He’s fantastic as always, and I could listen to him read the phone book. I’m so glad he was chosen to read this series.

The story: Mr. Schow is officially off my Christmas card list with this book. His books are gritty, and most certainly not fairy tales that leave you feeling happy.
However, if S ever does HTF, what he describes is more realistic than 95% of the other post-apoc books out there. He doesn’t sugar coat, he doesn’t leave you with a sense of well-being. He slaps you square in the face with a dose of reality, and he doesn’t check his blow.
As I’ve traveled along with the Dimas family, they’ve become my family. I have fought and cried and struggled and mourned with them as they battle their way through their new world.
Schow has a way of pulling you into his stories, of painting such vivid scenes that you can picture it all as it happens. His characters are human, they find strength they didn’t know they had, they falter and break down and they make stupid mistakes, just like the majority of us will if ever faced with a reality like he’s created. Yet they find the will to keep moving forward. He also shows us how far you might be pushed when faced with the choices of either giving up and dying, or refusing to go down and fighting to survive against all odds.
I appreciate this book because it’s made me think about whether I’m prepared to go the lengths they did to survive. The answer I found is, yes. I am.

I highly recommend this series.

So, Mr. Ryan Schow, I look forward to book 5, but I’m still mad at you right now.

The title says it all. Easy road ahead. Nope. Diseases from the dark ages, hunger, peril around every turn, small glimmers of hope, even mother nature wrecks havoic on our weary survivors. The performance keeps you engage, draws you just close enough to the disparity you can feel it. Thank goodness for the pause button. I needed it several times to catch my breath. By the end of their cross country trek, I want them ready to regroup and go to war. I won't spoil the story, but buckle up and watch your six.

This fourth book contains some pretty disturbing events so be prepared. One of the darkest novels I have ever read that left my heart deeply disturbed.

What a thrill ride from beginning to end. Throw in some hart stopping moments, funny moments and you have one great book. Do not hesitate to pick this book up but be warned you will not be able to put it down, turn on the coffee pot sit back and enjoy.

Best book in the series. Had some very interesting parts. I can’t say much that wont spoil it, but the last 1.5 hrs just WOW! Can’t wait to hear the conclusion in the late book. Keep up the good work Ryan!

So just hypothetically. You and a large party travel across country, 2000 miles by car. You make very regular stops to forage for supplies and food. You check out dozens of homes although interestingly almost no businesses. And across all these states, you are an able to find firearms or ammunition in any reasonable supply. Really? In America?

Or let’s say you absolutely need medicine. Prescription medicine. You’re traveling between towns and you check out lots of homes to see if there’s any unexpired medicine. But you Never check out a drugstore though or the pharmacy counter the supermarket. Really?

And let’s say you were writing apocalyptic fiction. Aside from selling lots and lots of sequels, why would you drag it out for five volumes. Well, perhaps there’s enough interesting material? Nope. Just lots of fighting over and over and over.

This series is turning out to be an enormous waste of time and credits.
Incredibly sloppy.

I found Ryan through Slater Corrigan and I can't get enough these apocalyptic books. honestly it's making me realize how unprepared I am. I am hooked on all these books now and the narrarator is awesome!!

I absolutely love this series

I love all the characters. I can’t wait to start the next book, but I have to go to work now. I’m counting down the minutes till lunch break

loved this series. wish more books were like this. it has great survival preparation tactics. hope he comes out with more similar with more scinarios.