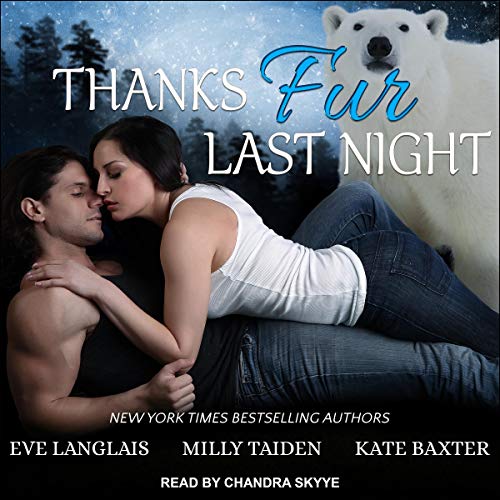 Cole should have killed Anja the moment he realized she was his mate. Instead, he let her live and now they're on the hunt, chasing the morons who think they can force her to marry another man. Like hell. And while this shapeshifting bear might have his share of sins, he's not going to let little things like murder and mayhem prevent him from having the woman meant to be the keeper of his heart.

Bought by the Bear

Josilyn Martinez just needed the money to help raise her nephew. That's it. There's no other reason she would take a job posing as a shifter's mate so he can assure his grandmother he's settled down. There's no reason to stay at his place so they learn "more about each other." And there's definitely no good reason she should get involved with the hard, hot, and handsome shifter that's hired her.

The Alpha and I

When bar owner Devon Kincaid finds a bleeding man - a hot, hard, handsome, naked bleeding man - in the snow one night, she brings him home to care for him. He's definitely not like any man she's ever met before, but what she doesn't realize is that he's not just a man....

What listeners say about Thanks Fur Last Night

The first story is a pleasant giggle fest. Quite surprising and fun. The other two not as good. Still worth the credit. Had forgotten how fun Eve Langlais is. Her story is getting all the stars.

loved this book with it's three short stories. l hope there will be ,ore books like this. l love all three authors and the narration was great as well/