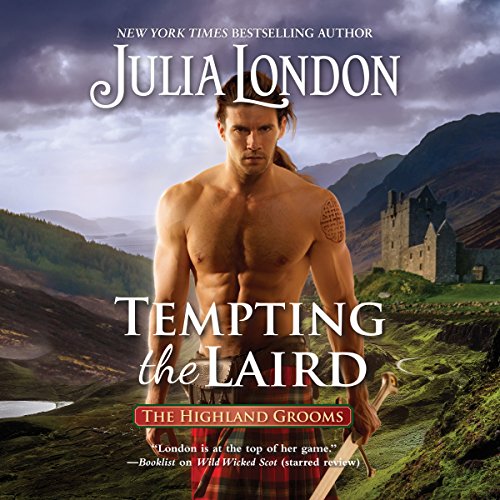 By: Julia London
Narrated by: Derek Perkins
Try for £0.00

Unruly. Unmarried. Unapologetic. Catriona Mackenzie’s reputation precedes her everywhere she goes. Her beloved late aunt Zelda taught Cat to live out loud and speak her mind, and that’s exactly what she does when Zelda’s legacy - a refuge for women in need - comes under fire. When her quest puts her in the path of the disturbingly mysterious Hamlin Graham, Duke of Montrose, Cat is soon caught up in the provocative rumors surrounding the dark duke. Never one to retreat, Cat boldly goes where no one else has dared for answers.

Shrouded in secrets, a hostage of lies, Hamlin must endure the fear and suspicion of those who believe he is a murderer. The sudden disappearance of his wife and the truth he keeps silent risk his chances at earning a coveted parliamentary seat. But he’s kept his affairs tightly held until a woman with sparkling eyes and brazen determination appears unexpectedly in his life. Deadly allegations might be his downfall, but his unleashed passion could be the duke’s ultimate undoing.

What listeners say about Tempting the Laird

This was another beautiful love story I just couldn't stop listening to it. I was up till the early hours of the morning. As i mentioned in my other reviews of the rest of the books of the series this is the 2nd time I am listening to it and I enjoyed it even more than the first time. I think this was my favourite one, they were all beautiful stories but in this one Caitriona was so sweet and funny she made me laugh out loud. And HAMLIN was to die for. Derek Perkins was a brilliant narrator and usually I am quite fussy about narrators. His voice for Hamlin was so hot. I definitely recommend the whole series. Now onto the next and unfortunately the last one.

Don't judge the book by its cover

They say not to judge the book by its cover and I usually don't but this time I will. The cover and the title are somewhat deceiving... This is not a book about a laird but a duke... Yes he may be Scottish but in this book he is nothing you want a highlander in a kilt to be... He is a weak character in my opinion. I don't usually write reviews but I had to say this. Sorry if you don't agree with me.

Catriona Has Bigger Balls Than Her Hero

I have to agree with another reviewer: the title is incorrect as Hamlin is a duke and not a laird and the cover art is not of the hero in trousers or breeches of the 1780's.

I've listened to the previous books of this family and enjoyed them but our heroine Cat is a 33 year virgin (not for long!) with a mission and a sturdier spine and bigger balls than her hero Hamlin. Yes, he was a nice guy but oppressed by his ex-wife and the gossip surrounding her "disappearance."

I love Derek Perkins performances. This one didn't have quite the huskiness to the Scots male characters I was used to but I found this enjoyable. I don't think it's a keeper.

The story is well written and interesting
with an unusual story line. Derek Perkin’s narration brings the story to life. He is a joy to listen to.

THIS BOOK SURPRISED ME...

I thought maybe it was going to be a little repetitive of other parts of the series, however, I was totally wrong! It was funny, sad, happy, tense and just an overall joy to listen to. I will not give a summary of what happens because I don't like it when others give away half of the book in their review. I will just tell you that there is just the right amount of "steamy" and a very different storyline than most that I've read.

Loved it and would recommend to anyone and everyone!

The story was great. The perfect amount of mystery, fun and love. The Duke was the perfect match and their story was sweet. The performance was just as wonderful and keeps you engaged! You'll not regret the buy.

Catriona Mackenzie is a woman on a mission. She needs to save the abbey and the women who are sheltered there. The English King wants it forfeited as a punishment. Can this fiery woman accomplish her goal? Catriona leaps off the page and pulls you in with her passion for life and her desire for social justice. I cared for her. I wanted her to be successful. When she meets the dark Duke, she's intrigued by the mystery surrounding the disappearance of his wife. She doesn't believe the rumors that he killed her. Hamlin may be a Duke but society has shunned him. I sympathized with him. I disliked how he was treated. The way he cared for his ward showed the Duke's real character. Catriona brought love and laughter into his life. Their dialogue was humorous and sassy. These two are perfect together. They deserve happiness. I wasn't sure it was in the cards. Julia London has a writing style that makes these characters come alive. I couldn't put down Tempting the Laird. I fell in love with Catriona and Hamlin. The narration of Derek Perkins adds life and passion to this romantic story. I love listening to my favorite author's books on audiobooks.

Catriona Mackenzie has been alone for so long that she doesn't even know what she would do if a man showed her any interest. Now that her beloved aunt has passed, Cat is determined to keep Zelda's legacy going. The crown wants the land for its own, so Cat must seek the influence of her uncle. While staying at her uncle's home, Cat meets the mysterious Duke of Montrose. Accused of the murder of his wife, Hamlin Graham is seen as untouchable, but Cat has never stood for rumors.

If you're looking for a highland tale with a bit of mystery thrown in, this is the book for you!