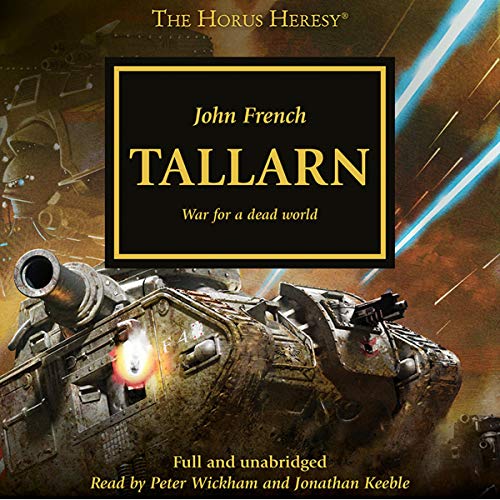 By: John French
Narrated by: Jonathan Keeble,Peter Wickham
Try for £0.00

As the Warmaster's campaign of galactic domination continues, his generals seek out fresh battlefields to conquer. After leaving the Crone World of Iydris behind, Perturabo strikes for Tallarn. A bitter, vengeful primarch, the lord of the Iron Warriors unleashes a deadly bombardment against the world, killing millions but entrenching the survivors.

A brutal, all-consuming armoured conflict ensues, the greatest of the war and one that grinds down all combatants over more than a year of relentless battles. But Perturabo's reasons for the attack are about more than unleashing punitive destruction against the Imperium - he has an entirely darker purpose in mind.

What listeners say about Tallarn

Iron within. Boredom without

Tallarn is a decent enough book, collecting the Tallarn novel and short stories in one volume. Of these Executioner is the best though it ends abruptly and the series never really recovers. Like Damnation of Pythos it's a serviceable book but doesn't do much at all to forward the Heresy story, and can be safely ignored if you want to save your credits for the meatier novels.

Admittedly its not an offensive novel - Battle for the Abyss and Outcast Dead remain the series low points - but it doesn't introduce any interesting characters or even lore. There's precious little story and it's credit to John French he sustains interest in such a slight meal. After the events of Angel Exterminatus this would have been a fantastic opportunity to study Perturabo and give him the same depth of character as Lorgar or Fulgrim.

Instead its almost a standalone - with no new revelation about the Primarch, a guest appearance by the Alpha Legion and some other equally forgettable events. It's a shame, as Perturabo is one of the more fascinating of the Traitor Nine and Tallarn could easily have been a breakout novel for him (Angel Exterminatus belonged to Sharrowkyn).

The gold standard for Iron Warriors remains Rob Sanders 'Iron Within' and this is what you should be spending your credit on. Tallarn is only recommended for completists

The war beyond the frontier, among men.

This is a magnificent book indeed. You will get a reality of men and women far from any Astartrs and Trans human. Tallarn is mud and blood, starvation and recycled air from leaking rubber hoses. This is the story of men and women, fighting way above their capabilities. Yet, they fight, they serve, and they tell stories.

Get in, close the hatch private. * lights a lho-stick and grabs the rusty canteen from the dirty flame, heating the recaf * Listen up...

static narration, little plot, stilted, boring, awful. literally the worst book in the heresy so far and the first one I couldn't finish.

One of the very best in the series

another slow burner novel. I was hoping for some backstorey on the planet Tallen but never really got that. cool tank battles but never finished the story. No idea where to find the conclusion will be.

Skip unless a completionist.

Fell asleep numerous times as for long periods the stories are uninteresting and the characters without depth. The naration is the only thing that keeps your attention at all. Does not in any way progress the heresy.

this was a fascinating story from the HH series and I found it enjoyable and entertaining. Jonathan K and John French amoung the best in the black library

An engrossing story where a large portion is akin to listening to a tank commander's minute by minute battle log.
Written well enough to have my imagination putting me into the tank as a war time observer.
I hope the authors have a chance to put me into another tank. Great stuff!

The Most Boring Primarch

Having read or listened to every HH novel up to this one Pertuarbo is really dull compared to his brothers. The human characters were much more interesting, although I find it odd that the genius of a primarch didn't easily crush a bunch of scattered mortals.

I didn't particularly like the narrator in the first few stories. Because of this, I found myself getting annoyed by his pronounciations and expressions.

Right Up There With The Best In The Series

Excellent listen. Loved the story. The narration was good but had some room for improvement. My major sticking point was the performance in relation to the female characters and the dreadnought. Still very good but could have been spiced up with either some more sound effects/voice modulation for the dreadnought and a female narrator for at least some of the female parts.

I was a little worried when it looked, initially, like it would be a anthology but it has a single major storyline told through a number of different viewpoints. Overall it comes together nicely. The story is not as contemplative as some the early entires in the series but miles above the bad ones. It has a feel of gravitas and epic scale that is sometimes lacking in the large scale novels. None of the characters are really super touching but each has their own points. I recommend.

Book is completely skip able. No major plot points, story is boring, the reader does a good job though.

Enjoyable but a bit dull

Well written, and good twists in the story arcs - but very few surpises in the scenes, very dogmatic and straightforward.

Most of the stories are well-read, but one in particular is absolutely atrocious, with terrible voice acting. Almost quit there, but since it is an anthology I stuck with it.

Worth a listen overall, though not stellar.

some black library books are worth it. This one is not one of them. Iron Warriors are lame

Optional headline that is mandatory

Audible app is quite a con artist. It's always trying to sneak one more star than what I pushed. About the book, it seems that I'm different. I've read that many like the first part a lot and dislike the latter. It was the opposite for me.

Tigers in the mud with plot.

When this book gets to the tank fighting, it reads like Otto Carius' Tigers in the Mud. It is a terrifying projection of the grim dark war of the Horus Heresy, well researched and painted in grissly realism. Unfortunately, the grandeur of the horus heresy is also its greatest weakness. You are torn from the viseral writing of combat into the murky politics and connivings of demi-gods and assassins. To me, the need to explain why cheapens the book from great to merely good.

Was here for Iron Warriors

I bought this book for the Iron Warriors, but they only start getting good spotlight at the second third of the story, and got a satisfying near-ending with Perturabo.

The best iron warriors book in the heresy. If you dislike the warriors read angel exterminatus first then tallarn. Now for tallarn itself. It’s not a typical anthology I’d say it’s more of a traditional novel with changing pov. The human characters in executioner and siren are all phenomenal. In ironclad despite some characters returning from siren they’re a bit boring now. But in iron clad the real show stealer is the equerry of Horus argonis, and hrend the iron warriors dreadnought. There is kord and he is a very good human character but not as important. Each story besides witness explores a different aspect of the battle of tallarn. Executioner goes into the horror of fighting the iron warriors. Siren explains how human soldiers survived and called for help as well as the combat doctrine of what would become the tallarn dessert raiders regiment. Iron clad than explores why the iron warriors are there in the first place and how they’re reacting to being held back. I can not recommend this enough. I love it don’t the anthology tag scare you away it’s a bit misguiding