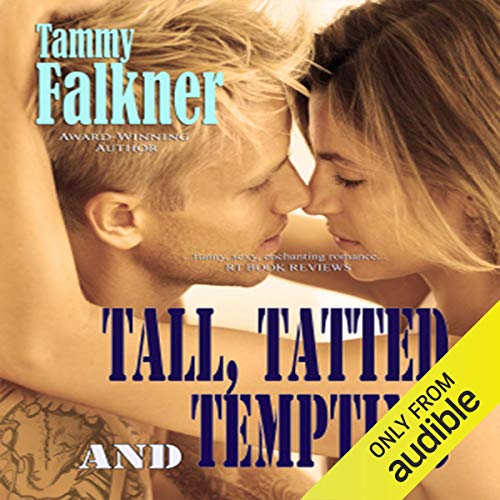 By: Tammy Falkner
Narrated by: Dara Rosenberg
Try for £0.00

She's locked up tight. But he might be the key. Logan Reed is tall, tatted and tempting. Kit's a woman with a mean right hook and a secret. Kit wants a tattoo, but Logan sees more than she intended in the drawing she shows him. He sees her in ways no one ever has. Logan's not disabled; but he hasn't spoken in eight years. He hasn't needed to. Until he meets Kit.

What listeners say about Tall, Tatted and Tempting

I adore these books.I have read them all in eBook form and had to buy them in paperback. Its even better listening to them. They are an amazing bunch of characters and the story is well written. The narrator is really good and I had fun listening to it.

Told from alternating points of view, Logan and Emily's, this book had an interesting plot. Logan and Emily are each dealing with their own personal struggles, and even though a little over the top at times, as far as the story line goes, it’s not too over the top with angst or overly dramatic. This book captured my attention right away. The characters were endearing, the story was fast paced, interesting and refreshing. Lets just say a few pages in and I was hooked. By the time I hit the ending, I was disappointed it was over so quickly! In fact, this book ends abruptly but leaves you knowing there is more to Emily and Logan’s story. Emily goes by Kit. She spends her days playing guitar by the subway of NYC. She is a long way from home. She comes from a whole different world than the one she is living in now. She is homeless- but it’s a choice she made. She's hiding a secret that she can't trust anyone with. Next you meet Logan who lives with his four brothers. He is a tattoo artist. He is a bit of a man slut. And he is also deaf. He too has his own secrets. One day Emily arrives at a tattoo parlor requesting a tattoo of one her designs. Logan is the tattoo artist for this project. The sparks fly between them especially when Emily ends up punching him in the nose and breaking it. From that point, Emily and Logan start to form a connection early on and the chemistry between them is quite believable, but what I really loved is the relationship she forms with all his brothers and that the brothers have with each other. I family dynamic in this book was great. Even though Logan had no parents to speak of, his brothers were a tight unit. I especially had a soft spot for Matt. Although short, this book was still packed with plenty of steam and enough awwwww moments. Still worth the purchase even though the book was very short.

One of my all time favourite books

Absolutely loved this book, shows the power of love and family. The ending was awesome with the press conference and the tattoo on Emily's arm was such a good ending.

I listened to this book years ago and finally decided it was time to finish the series. This audiobook is an example at how much my tastes have changed since 2014 because while I still enjoyed the story, the narration really kinda of ruined it for me. She really just was not a good fit for this story at all. She sounds like a 12 year old girl no matter what character she is narrating. Her voice barely changes from male to female characters and it was very distracting. I did try to ignore all my inner thoughts about the narration and just enjoy the story for what it was. I loved Logan and his brothers. I can't wait to hear the rest of their stories. I know I will probably feel the same about the next couple books but I am determined to finish this series and I'm happy to see a narration change coming too.

If you could sum up Tall, Tatted and Tempting in three words, what would they be?

Logan Reed of course, I loved him!

The last one when she called her father and arranged to leave in order to save Mat's life.

Thanks a lot to all of you :D

Hooked me. Interesting characters and couldn't wait for more in series. Ending was clearly a cliff hanger but assured that I'll read the next book!

Great book with a different story line. Super sweet love story. I love the narrator! I really love how she changed the inflection of her voice to show distinct characters, but didn't try to do a false male voice. So far she is my favorite narrator!
Can't wait to start the next book in the series!

decent book with an abrupt ending. no ending build up. guess the rest is in book 2.

written and read very well. I would love to see more of these guys in another story.

Pretty good if you don't think too hard

I liked this book. It was sweet and interesting. My only real complaint is that the main character, Logan, seems all angsty for the first little bit and then magically becomes un-angsty, and then we focus on Kit's angst. I don't know how to explain this without revealing a plot point. I don't really think it's a spoiler, since it happens so early in the book, but some folks are sensitive. So I will separate it into its own paragraph below.


Logan goes deaf when he's 13 (I think. Maybe 11. Anyway). Kids tease him about the way he talks. So he stops talking. To everyone. For 10 years (or something like that). Then, one day, he talks to Kit. No insecurity about it. No struggle. Nothing. This doesn't seem realistic. If you had the will power to stop talking for years, it must be a pretty big deal. So talking again ought to be a huge deal. But no. Weird, but not a deal breaker.


Didn't care for the narrator. But the story was sweet. I am thinking about picking up the second book. :)

I just cannot get into it...

I keep trying to get into this story... Great opposite attract story...but man.. I am just so bored..