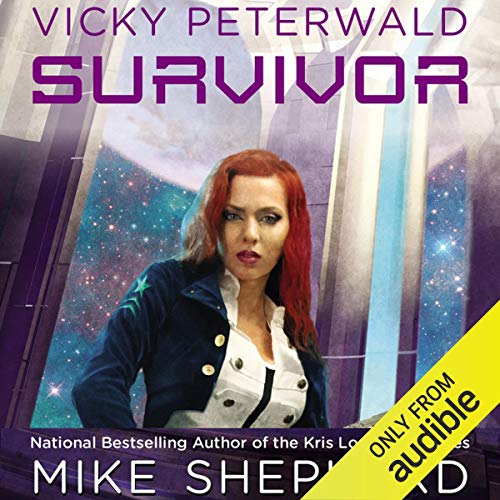 Seeking revenge for her brother's death, Grand Duchess Vicky Peterwald underwent an unlikely transformation - from pampered heir to naval lieutenant. Now a new challenge looms: Vicky will need to use both her military and political ranks to rebuild war-torn planets, planets ruined both by the Peterwald Empire and by Kris Longknife's revolutionary quests.

But not everyone shares Vicky's goals. When the death-before-dishonor code of the Navy meets the anything-goes-to-win motto of the Imperial family, Vicky must confront, outwit, and conquer both revolutionaries and her own family to stifle galactic disorder.

And nothing stops a Grand Duchess, on or off the field.

What listeners say about Survivor

back and so good

After being dragged down to the bottom of the pile in book 1. Book 2 pulls it all back this book take the time to grows Vicky the story and the overall world in the book's role on book 3.

It is important to read this series in order as one book feeds into the next book. At the end of the last book (Target) in the series Vicky had arrived at St. Petersburg and was refused access to the planet. This book opens with Vicky and her pilot/bodyguard on descent to the plant in an old landing craft with the Planet government threatening to shoot her down. From this exciting opening the action never stops. From assassination attempts to political intrigue Vicky weaves her way to put together a fleet of merchant ships from St. Petersburg to go to the two nearby starving plants to start a barter trade to save all three plants and feed the starving people. Vicky’s step mother has put a price on Vicky’s head for her death while she is attempting to take over control of the Greenfeld Empire.

Vicky has grown a great deal in this book from the original spoiled brat that she was portrayed as in the Kris Longknife series. She is now a responsible and caring beautiful young woman. Thank goodness Shepherd has significantly reduced the sex scenes from the last book. Shepherd has such interesting characters in his stories with great bantering dialog. Vicky’s personal computer cannot match Kris’s “Nellie”. Looking forward to finding out what happens to Vicky. Dina Pearlman narrates the story.

The little Dutches grows up.

This is the second of the the Vicky Peterwald series. a spinoff the the Kris Longknife books. In this book we find Lt. Commander Peterwald growing up. Finding the real world limits ans she starts to build her base of operations for the rebellion to save the soul of the greenfeld empire.

Ms. Pearlman's narration is spot on and excellent as alway. I can't wait for the next book in this series.

I must say each of these books and come out I enjoy more and more. another science fiction series that reminds me a lot of the Honor Harrington line.

Very nice read was a little disappointed at how short it is but still a great story well worth the time.

A. really good story any Chris Longknife fan will love. I am looking forward to the next installment.