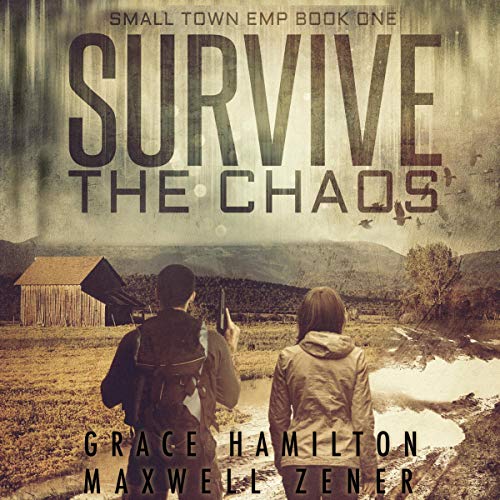 By: Grace Hamilton
Narrated by: Maxwell Zener
Try for £0.00

When the lights go out, anarchy reigns supreme.

After Austin Merryman’s wife died, he and his 14-year-old daughter left home to travel the country in an old RV. But the comfort and renewal they sought soon descends into chaos - even before the EMP hits.

When a message from an old college buddy leads Austin to a bridge in the middle of nowhere, he finds his friend - now an NSA agent - waiting to give him a USB drive. Before the contents can be explained, machine gun fire strafes the bridge, killing Austin’s friend and forcing Austin into the raging river.

Rescued downstream by a beautiful veterinarian, Austin learns that EMP attacks have thrust the world into eternal darkness and separated him from the only person he has left: his young, but resourceful, daughter. Now, he’ll move heaven and earth to locate her and make it to his brother’s hideaway in Utah.

But the post-apocalyptic world is no longer a friendly place. Resources are growing scarce. Factions break out and walls go up. Everyone is willing to do whatever it takes to survive in an increasingly hostile environment. And Austin’s daughter is caught right in the middle of this splintering society.

But an even-deadlier foe stalks them as they struggle across the landscape - someone who hasn’t forgotten about the USB drive Austin possesses. And they’ll do anything to get it back.

What listeners say about Survive the Chaos

This is a post EMP survival story written by someone who is anti-gun or at best knows next to nothing about guns other than they heard the word bumpstock on MSNBC.

Separated and under fire, a father and daughter must find alliances as they travel across the country in search for each other. Great story, interesting and layered characters. I liked that no one was a Superman or woman, but everyone had facets and flaws. I'm excited about where this series is going. It was very well narrated as well. I was given a copy of this book in exchange for an honest review.

Before i begin, book 2 is much better, this book was a very slow build to nearly nothing, it was only at the end it picked up for me. Im still not sure it is terribly believable in the beginning either, thats for your to decide i guess.

Overall I really liked the story line and the characters. The book started out slow and I was hard pressed to keep the timelines straight. As the story progressed, I found that i was able to get into Grace's writing style and the progression of time. At first I thought the plot was going to head into another "invincible" protagonist that has uncanny luck story but she did a great job making the characters real and keeping that cover over the rest of the characters. There were characters I did not like but that is not a bad thing...they fit into the story and were developed well enough. The different approach she took on an EMP event allowed me to imagine a softer world in such chaos. Bad guys made just as many mistakes as the good guys and not everyone killed or was killed at the site of other people. I liked the idea that society wouldn't take a head dive straight into cannibalism/mass murder in the first few hours. SPOILER*** I enjoyed the wanna-be pepper brother with the compound and fortress that completely blitz on him and trapped him in his own house. I could read a whole book on just that scenario.
The narrator left me a little disappointed but I was able to get through and eventually it was ok. I will be purchasing the other books in the series and look forward to them. I received this title for free in exchange for an unbiased review.

With neither the characters or plot grabbing me, I found myself speeding it up more and more. And then it ended with so much unresolved. Felt like I was only given Act 1. The story may develop into something great but unfortunately I won’t be around to find out.

I enjoyed this book quite a bit. If you follow my reviews, you may have noticed that I have been on a bit of an end of the world kick. Actually, I have been reading a lot of zombie apocalypse stories but I thought it was about time I mix things up a bit. This EMP story was a nice change and I really did enjoy myself.

Austin and his 14-year-old daughter, Savannah, live in an RV in a very rural area. Austin is a journalist who has a meeting with a contact while Savannah has plans to get some ice cream with her friends (at least, that's the story she gives her dad). When the EMP hits, things go south very quickly. Everything stops working and meeting back up with each other is beyond challenging. The world after the EMP is entirely different than it was before with people taking what they need from others without remorse.

This was a pretty exciting story. Austin and Savannah had separate journeys but they both had a lot of obstacles to overcome. I thought that getting to see things from two very different points of view helped me to really get a feel for what the world was like after the EMP hit. I was worried about these characters and hoped that they would make it to safety and find each other but I wasn't sure it was going to happen. It just seemed that the world was against them at times. This was a very well-paced story that was hard to set aside.

I liked the cast of characters in this book. Austin and his daughter are pretty down to earth characters that are easy to cheer on. There is a pretty large cast of supporting characters who I thought felt realistic. Some characters seemed very trustworthy while I wonder about the motivation of others. I liked the variety and I thought that the author did a good job of introducing them at a rate that allowed me to keep them straight in my mind.

This was my first experience listening to Maxwell Zener's narration. I have to admit that it took me a bit to get used to his reading, especially the parts from the female perspective. After I gave it some time, I found that I really liked his delivery of the story. I thought that he had a very pleasant voice which was easy to listen to for hours at a time. I wouldn't hesitate to listen to his work again in the future.

I would recommend this book to others. I found this to be a really exciting story that was very plausible. The characters were well developed and easy to like. This was the first time that I have read any of Grace Hamilton's work but I hope to read more in the future, including more of this series!

I received a review copy of this audiobook from the author/narrator via Audiobook Boom and have voluntarily left this review.

Widowed father and daughter, Austin and Savannah Merryman, leisurely travel the country in an old RV. As the mysterious EMP strikes, Austin and Savannah are violently separated; forced into a frightening and dangerous race for safety across two states. Austin dives into a raging river after a meeting with an old friend turns deadly, and his NSA Agent friend is gunned down. Before he dies, the NSA man passes Austin a thumb drive with no chance for an explanation. Little more is made of the USB drive in this volume other than a mob boss sends the hired killer, Zander to recover the drive. Meanwhile, Savannah panics and joins a passing family heading for Utah for safety. After recovering from his brush with death, Austin and potential love interest race to recover Savannah. We’re presented with a tense action-thriller with a little bit of everything; an EMP, hired killers, kidnapping, conspiracy, courage, perseverance, and possible romance. What else could you want; credible climax? I was given this free review copy audiobook at my request and have voluntarily left this review.

Grace did a good job at keeping my attention. Was a good mix of groups that were in the story. Like the way she mixed all kinds of scenarios in different ways throughout the book. It all leads to a very climatic ending and you sitting there with a big WHAT! It's over. Great job.

This story was very gripping. I couldn’t stop listening to it. The plot was amazing. EMP stories are one of my favorites! I loved the characters and the narrator did a fantastic job of bringing the story to life. I can’t wait to read or listen and see what happens next!