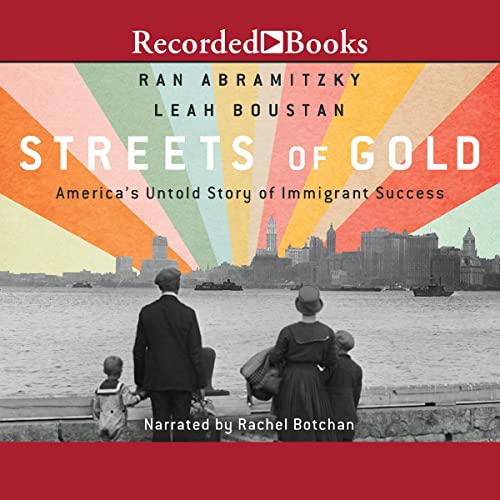 By: Ran Abramitzky,Leah Boustan
Narrated by: Rachel Botchan
Try for £0.00

Immigration is a fraught and misunderstood topic in America’s social discourse, with much of what we believe based largely on myth. Ran Abramitzky and Leah Boustan have spent the last decade searching for the facts. Their pioneering research digs deep into the data on immigration, linking the experiences of immigrants from the nineteenth and early twentieth centuries to those of immigrants today. Using powerful storytelling alongside big data, they provide new evidence about the past and present of the American Dream that will change our thinking and policies.

Immigration changes the economy in unexpected positive ways, staving off the economic decline that is the consequence of an aging population. Closing the door to immigrants harms the economic prospects of the US-born—the very people politicians are trying to protect.

What listeners say about Streets of Gold

Challenging commonly held beliefs, the authors share an excellent mix of narrative and research to build a remarkably robust picture of US immigration. Narrator strikes an excellent tone for the material and guides listeners through the passages explaining research methodology with clarity.

Superb narration of groundbreaking, eye-opening scholarship. Experience the story of immigration in America as told by two scholars who reveal the hidden truths contained in historical census records. These writers extraordinaire offer us hilarious, sobering, optimistic, and poignant stories about coming to America from individuals whose personal narrative and verifiable records, at times combined, lay bare the truth about immigrants who made America “back then” and the surprisingly similar reality of immigrants today. Individual narratives are paired with population level analyses to reveal that the “rags to riches” story you heard is reality told at 2.5X speed; the timeline was embellished, yes, but the ascent reflects patterns evident across the population, then and now. Immigrants have thrived, and continue to thrive in America, while natives share in their success. (I’m summarizing, there’s more to it than that!) This book will leave you better equipped to observe and consider questions confronting your own community — you’ll appreciate we’re all affected by the presence, or absence, of new comers as neighbors.