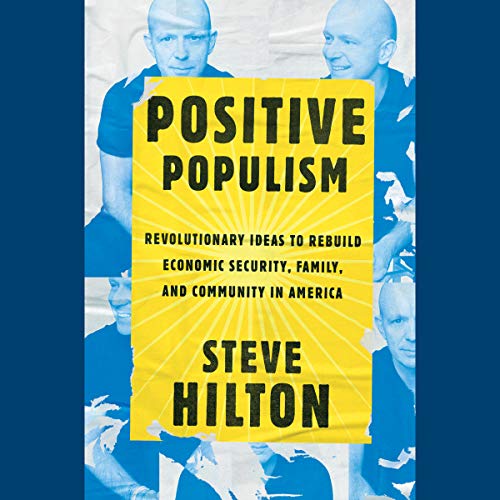 The elites still can't believe Donald Trump won or that Britain voted for Brexit. But what’s next for the populist revolution and for the people who believe in it?

Fox News host and former government insider Steve Hilton shows how populism can be a positive force for improving lives, with revolutionary ideas to restore the economic security that working Americans once took for granted and rebuild the ties of family, community, and nation that have been ripped apart by decades of policies that favored big government, big business, and the powerful.

Recounting his own journey from immigrant roots to the heart of power - and his deeply personal battles with the permanent bureaucracy once there - Hilton vividly describes the scale of change that's needed if the true promise of the populist revolution is to be delivered, including:

Whether by challenging the excess power of corporations in our economy or the corrupt influence of donors and lobbyists in our government, the ideas in this book echo the intent of America’s founders by taking power from the ruling class and putting it in the hands of the people.

For too long, populism has been defined by those who despise it. By focusing on what populism is for and not just what it’s against, Hilton provides a coherent philosophy and practical blueprint for how the movement can have an impact beyond one election cycle and in people's everyday lives. That’s positive populism.

What listeners say about Positive Populism

Steve Hilton I want a refund!

Hilton is a sycophant that doesn't stand behind these ideas, don't feed his pockets by purchasing this book. He has no stake in American discourse and continues to spread propaganda that only serves to play on the divisions and hatred that currently exist in our culture. Shame on you Steve!

There is much to like about these ideas, even if I don't agree with them all. The bottom line problem is that power never gives itself away, so those that have it won't rock the boat for change.

Best ideas since the 60s

This is the most clearheaded innovative set of ideas about how to create a new future for our country that I’ve heard in 50 years. I fondly hope enough of it will happen.

BACK TO WHAT MATTERS

Finally it is acknowledged that regular working / middle class citizens are left behind because of greedy officials we voted to put in office to work for the people. But instead working for lobbyists and themselves. This book set the stage for the next revolution, and is a must read. Thank you Steve Hilton for writing this book.

We need a Revolution

A great read/listen for every American no matter which party(Democrat, Republican, Independent or Libertarian). Our government is broken, there are many POSITIVE ideas here that can begin the process of change fo the better. We are leaving a legacy for our children and grandchildren, let’s step up!!! COS

it was good for a nonfiction. he did say he was a populist. so he's a centrist who wants to help the neighborhood

Amercian workers standard of living has flatlined for 50 years. And that is why Trump and Bernie are popular with voters. Mr. Hilton gets it and explains what our American oligarch owned mass media will not discuss.

This is a really interesting book that will cause everyone to perhaps looks at things a bit more enlightened viewpoint. Great job to Steve Hilton.