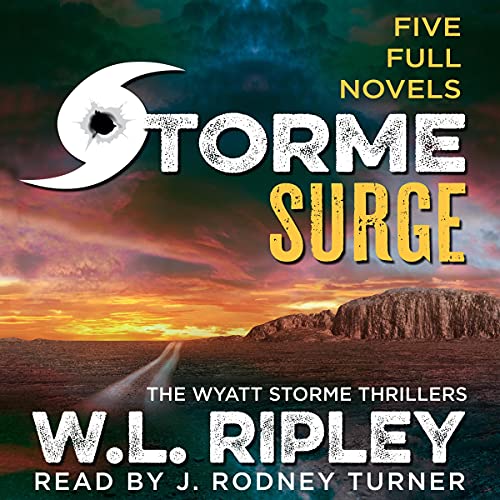 All five novels in the action-packed, wild, and witty Wyatt Storme series in one volume!

Vietnam vet and former pro football player Wyatt Storme is bow-hunting in Missouri when he stumbles upon a hidden field of marijuana...and is attacked by a vicious dog and shot at by a sniper. He reports violent incident confidentially to the local Sheriff...who is murdered the next day. Storme believes there’s a connection and starts asking questions, unraveling a deadly conspiracy of corruption, drug-trafficking and organized crime...and making himself someone that just about everybody wants dead.

Eye of the Storme

A young co-ed is raped by a country music legend in Branson, the “NashVegas” of Missouri. Ignored by the police, she turns Wyatt for help.

Chick Easton, a hard-drinking, shockingly lethal ex-CIA agent, asks his buddy Storme for back-up when he's hired by the director of a big budget western to protect a bad-boy movie star who is getting well-deserved death threats.

Wyatt and Chick are fishing on the Lake of the Ozarks when gunmen blow by them in a boat, chasing a determined woman seeking justice for her family...and are swept into a violent battle for control of a new casino and into the middle of a mob war.

"Storme is one of my all-time favorite series characters, up there with Spenser and Dave Robicheaux." (Ace Atkins, author of Robert B. Parker's Spenser series)

"Here's one for the boys who like to kick butt. Fighting the good fight has seldom been so much atavistic fun!" (Kirkus Reviews)

What listeners say about Storme Surge

A very very good story with incredible characters, with the a fantastic narrator in J Rodney Tuner, couldn’t put it down.

Wyatt and Chick are an entirely enjoyable duo who get into dangerous but entertaining situations and manage to escape battered but alive. I’m sorry the series has ended.