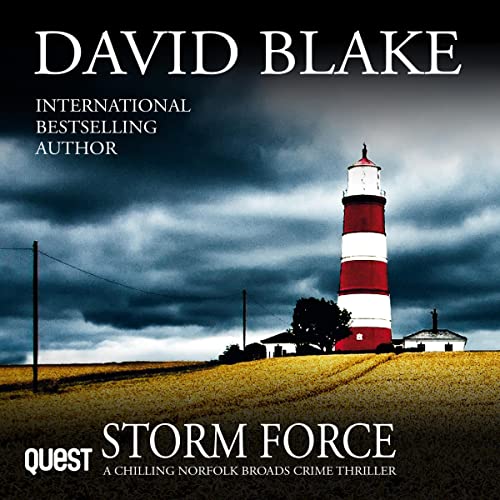 By: David Blake
Narrated by: Jonathan Keeble
Try for £0.00

Two marked men, three missing women and an approaching storm, powerful enough to change the Norfolk landscape forever. As a category four storm looms large over Norfolk’s wide open horizon, DI John Tanner is given the task of solving a high-profile murder. But when another body is found just as three women are reported missing, he faces a race against time to uncover the truth before the storm moves in to destroy everything in its path, including the evidence Tanner so desperately needs.

What listeners say about Storm Force

I nearly gave up on this outing of Tanner’s. The plot was interesting but the behaviour of Tanner - smirking, making inane comments, conducting interviews with poorly framed questions - I was so irritated especially as I’ve enjoyed previous books. Also Tanner’s lady friend Christine seems remarkably stupid expecting a senior detective to keep arrangements when embarking on a serious crime investigation. Equally what was Tanner thinking even making a date when murders have just been committed? His bosses were also annoying beyond belief. In addition, granted unlike vast numbers of listeners, I find Jonathan Keeble just too histrionic at times. I prefer more restrained, laconic renditions. I’m not sure whether or not I shall continue with this series.

another good book from David Blake

Everything you want from a crime novel. Good story line with familiar characters well written and EXCELLENTLY narrated by Jonathan Keeble

Weak story and over dramatic performance.

if all police were as dense as portraid in this book, we would be in a sorry state.

I love good detective fiction and as an actor, I am also very fussy about it being well-read and correctly pronounced (eg no American pronunciations for English place names and the mispronunciation of other words). But this story bored me, I knew from the start who the culprit was, I didn't believe the characters, didn't care about them and lost interest really fast. There are so many good writers of this genre out there - I didn't think this was up there with them. And the reading attempted to give the characters some life, but although I know it is hard to depict a man if you are a woman and vice versa, the women in this came across weightless and fluffy. Not a success for me!

Absolutely had me hooked from start to finish.

This book, like the others, had me hooked. Thrilling with added humour. Absolutely loved it.

An excess of unnecessary adjectives clog every sentence. The characters are unbelievably stereotyped. Poor.

David Blake does it again!!

Another great storyline, keeps you guessing right to the end
Brilliant narration, bring on the next book

I just love this series of stories. Well written and narrated. One more book to go. Can't wait.

I enjoy David Blake's books. This one was really a mystery, since it seemed to be different killers and blackmailers and it was tough figuring out who was who and who did what. The one thing I really, really hated in this story was what happened to Alice. That was not at all necessary, Mr. Blake.

There was no romance, just an attempt at one, and the F-bomb was used 12 times.

As for the narration: Love, love, love Jonathan Keeble. Fantastic at voices and emotions when he reads.

So far, all the books in the series are good for what they are- quick, easy listens to get you through while waiting for something else. Easy to solve, not too intense. I recommend for that and for Jonathan Keeble, whose narration keeps it lively!

This has been an excellent series to listen to!! I’ve laughed, cried, rolled my eyes many a time throughout!! Brilliant narrator!! Can’t Wait For the Next Book!!!!!