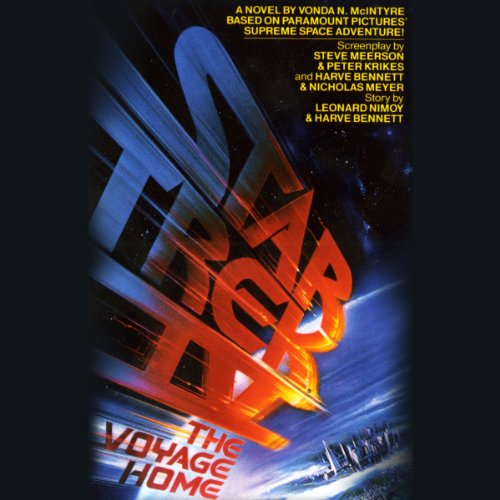 Their ship destroyed and their captain facing charges that could end his career, the men and woman of the Enterprise head home - to a planet Earth on the verge of extinction! An alien space probe has begun to destroy the atmosphere and threaten all forms of life. Somewhere in the 20th century is the key to the probe's deadly fury. Kirk and his crew must make a desperate journey into the past - to save the only hope of the future.
For more Trek titles, browse our special Star Trek section!
©1986 Paramount Pictures Corporation, All Rights Reserved (P)1986 Paramount Pictures Corporation, All Rights Reserved
Space Opera
Show More Show Less

This audiobook is an abridgement of a novelisation of the 1986 film. The fact that it's been cut to approximately the same length as the film raises question marks, given the amount of information that a film can convey visually but a book - or an audiobook - has to spell out more explicitly. At times I felt like I'd got lost in the story, and certainly I'm not sure how intelligible the plot would be if you hadn't seen the film. One can quite clearly 'hear' where the abridger has removed sections, which is not the mark of a good abridgement.

Nonetheless, the story is a good one and doesn't suffer mortally from the abridgement. The reading - by George Takei - is a good one, though the distinctiveness of his own voice sometimes makes it confusing when other characters are speaking. The sound effects I found an annoying distraction, adding little and sometimes muffling the reading. The quality of the recording is also not perfect - I think it was originally recorded to cassette.

Overall, I enjoyed it for its nostalgia value, as bedtime listening, and because it was so reasonably priced, but I'm not sure I'd buy it again.

just like the film. so very good. George takai is a fantastic voice to have reading.

"Admiral, there be whales here"

The first time I watched this movie, many years ago, I loved it. That is still the case. The time travel episodes/movies of Star Trek have always fascinated me, and the books are no different.

This book is remarkably similar to the movie, and is yet another great addition to my collection :-)

lovely audiobook. listened all the way through . I've got to get used to this because I'm losing my sight.

This was the first Audiobook I ever had on Tape. Nice bit of Nostalgia. Spock's parts are brilliant.

I had hoped it was the whole book by Vonda McIntyre. I love Star Trek and I love McIntyre's original works. But unfortunately, it is seriously abridged. There isn't much more there than the bare bones of the someone lacking story from the movie. It's not the most brilliant of the Star Trek movies, after all. The production and performance, however, we fantastic and well worth the listen. George Takei does a great job of evoking all of the different characters. The sound effects and music add a lot to the story and it's also nice to hear Leonard Nimoy doing little Spock monologues. I just wish they'd made it longer than the actual film, so that we could've gotten more of the back-story and more depth to the characters, which I'm sure McIntyre included in the book.

I got this title because, when I was in the eighth grade, I fully enjoyed the novelization of STAR TREK IV, and the price was insanely low.

Unless my (nearly photographic) memory is failing me, this is NOT the novelization. It's more like a reading of a summary with a few interjections by Spock and sound effects, and contains none of the added detail I remember (such as the scripted, but unfilmed, scene where Sulu encounters his ancestor).

Takei and Nimoy must have really needed the money, that's all I can say.

This was not Vonda McIntyre's full novelization of the movie. At best, this was a severely abridged version. At worst, it was an amateurish imitation based on the screenplay. Too many parts of the movie script were missing, to say nothing of entire chapters of McIntyre's book.

where is the unabridged

as this is my favorite movie I was hoping to find the unabridged version. I am not quite sure why this is abridged but it is still a great listen