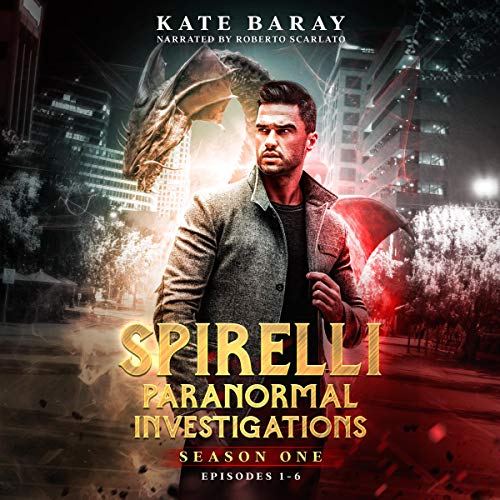 By: Kate Baray
Narrated by: Roberto Scarlato
Try for £0.00

Jack Spirelli, paranormal investigator, public debunker of paranormal frauds, and private fixer for the magic-using community, has opened his doors.

Jack’s in a crunch. Since he went pseudo-public with Spirelli Paranormal Investigations, his business has sky-rocketed. Debunking the scum who prey on vulnerable targets makes up half his business now. And the rest of his time? Jack’s on speed dial with the Texas Lycan Pack, the Inter-Pack Policing Cooperative gives him an occasional ring, and anything that goes bump in the night might just call him with a job.

He needs an assistant, another investigator, and some additional muscle, but maybe the dragon who just walked in and applied will do for now.

Each of the six stories in season one covers a new Spirelli case.

What listeners say about Spirelli Paranormal Investigations: Season One: Episodes 1-6

There's potential here, but the characters were not likeable nor was there even one character I cared about. The stories could have been interesting, but the writing was so ordinary. No nuance,. Everything was explained. Just another book where people had conversations in different settings and things happened. Blah blah blah. Somewhere along the way in this book I wanted to remember what good writing is like so I binged the Murderbot series, then came back to this and finished it. These Spirelli book characters needed more vivid and different descriptions put in from time to time, and the old guy and young woman trope is tiresome (yes, the "Dragon" is old, but the woman is not)) Nuance and layers make a story interesting. I don't mean sexual innuendo, I mean give the readers credit and figure readers are intelligent enough not to have everything ordinary explained out loud. Unique observations and thoughts were missing. For the author - So many opportunities for laugh-out-loud humor were missed. (Read Patrick McManus short stories for good examples of laugh out loud written humor - Read the Murderbot series for good examples of richly written characters and writing with nuance, layers and intelligence - Read the Rivers of London series for examples of how research makes for better back stories and history) I don't know, maybe another draft was needed - Spirelli Paranormal Investigations became a chore for me to finish.

I love repeating and developing relationships among characters, this series does not disappoint. Highly recommend this series.

I liked this well enough to finish it. I won’t be looking for more by this author but this one was okay but not a standout.

These stories are a fairly blatant 'homage' to the Dresden Files books, with the addition of a junk shop and a dragon lady assistant. That being said, the stories were fun, didnt require a lot of concentration, and were a nice listen. The performer left something to be desired, but not enough to make me stop listening. If you want to do something, and just keep half an ear on a book, these six short stories are a good choice.

#1 ABOUT THE DISAPPEARING CLIENT
Cute story about Jack Spirelli's client that disappeared while in the forest, in a ghost's magical bubble.

#2 THE FORGOTTEN MEMORIES
Cool one about a man who stole people's memories. And had been doing that for over 200 years.

#3 THE FLEEING WITCH
This was about Sylvia, a witch, who wanted to leave her not-so-nice coven, and hired Jake and Marin to get her safely from Austin to London, while witches were after her to kill her.

#4 SOMETHING NASTY II THE ATTIC
Jack finally met his "house guest," which turned out to be an Arkan Sonney, a hedgehog, that likes crabmeat and shrimp. And Jack "melded" with an old, old dragon.

#5 THE GEOLOCATING BOOK
This one was about a book that was very old, that Jack and Marin were sent after and about a knife that only had to touch you and you'd die. Fortunately, Jack didn't die when it grazed his skin.

#6 HEARTBEAT IN THE HOUSE
This one kind of left you without answers. A house that was possessed by an entity and the old man who owned it asked Jack and Marin to help him get rid of it. I guess they did because it just left and no one knew where it went. The End.

Sooo, okay! My iPad says the F-bomb was used 2 times but I can assure you it was used 10 or 15 times. The book would read damn or s**t but the narrator would say f**k. Apparently the author rewrote it and changed the worse swear words. There was no romance.

As for the narration: Roberto Scarlato did a fabulous job, on the voices as well as the emotions.