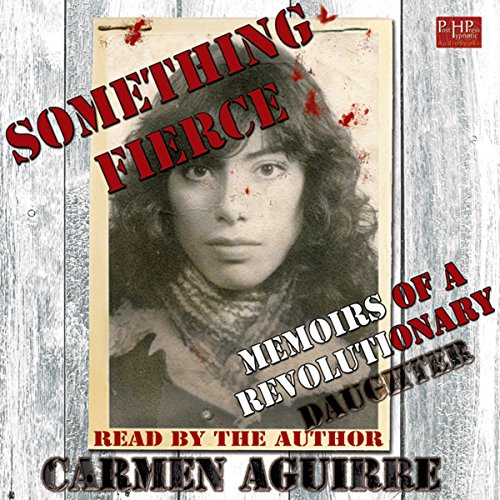 Carmen Aguirre was six-year-old when she and her family fled to Canada following General Augusto Pinochet’s violent 1973 coup in Chile. She was only eleven-years-old when her mother and stepfather joined the resistance movement and returned to South America, taking Carmen and her sister went with them. As their mother and stepfather set up a safe house for resistance members in La Paz, Bolivia, the girls' own double lives began. At 18, Carmen became a militant herself, plunging further into a world of terror, paranoia and euphoria.

Something Fierce covers the eventful decade of 1979 to 1989 and takes the reader inside war-ridden Peru, dictator-ruled Bolivia, post-Malvinas Argentina and Pinochet’s Chile in the eventful decade between 1979 and 1989. Writing with passion and deep personal insight, Aguirre captures her constant struggle to reconcile her commitment to the movement with the desires of her youth. Dramatic, suspenseful and darkly comic, it is a rare first-hand account of revolutionary life and a passionate argument against forgetting.

"Aguirre's riveting memoir chronicles her childhood as the daughter of Chilean resistance fighters...[her] writing is splendid; she combines black humor and a sharp intellect and tells her powerful story in grand style." ( Publishers Weekly)
"In a voice that rings beautifully and heartbreakingly true - filled with tenderness, confidence, vulnerability, compassion, fear, and courage - Something Fierce movingly renders the normal difficulties and pleasures of adolescence as they collide with the urgent sacrifices and consequences of clandestine political struggle. Only a real writer could do justice to such a remarkable story, and Carmen Aguirre proves up to the task at every turn - an overwhelming and inspiring read." (Casey O'Neil, Elliott Bay Book Company)
"Only Aguirre could have written this book. She has given us the gift of her own experience." ( New Socialist)

What listeners say about Something Fierce

great story, read by Carmen Aguirre herself. learn about the revolutionary attempts to bring justice to Chile, and for those exiled by Pinochet.

This book captures incredible stories from the past, I'm so grateful to have read it