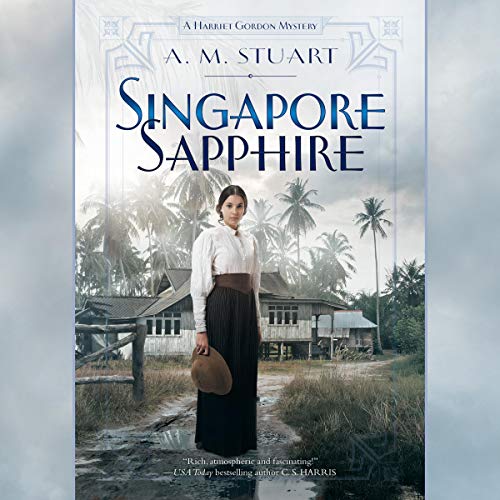 Early 20th-century Singapore is a place where a person can disappear, and Harriet Gordon hopes to make a new life for herself there, leaving her tragic memories behind her - but murder gets in the way.

Singapore, 1910 - Desperate for a fresh start, Harriet Gordon finds herself living with her brother, a reverend and headmaster of a school for boys, in Singapore at the height of colonial rule. Hoping to gain some financial independence, she advertises her services as a personal secretary. It is unfortunate that she should discover her first client, Sir Oswald Newbold - explorer, mine magnate, and president of the exclusive Explorers and Geographers Club - dead with a knife in his throat.

When Inspector Robert Curran is put on the case, he realizes that he has an unusual witness in Harriet. Harriet's keen eye for detail and strong sense of duty interests him, as does her distrust of the police and her traumatic past, which she is at pains to keep secret from the gossips of Singapore society.

When another body is dragged from the canal, Harriet feels compelled to help with the case. She and Curran are soon drawn into a murderous web of treachery and deceit and find themselves face-to-face with a ruthless cabal that has no qualms about killing again to protect its secrets.

“My favorite new mystery series! Set in a unique and compelling setting, and filled with fascinating historical research, deft characterization, and thrilling suspense, readers will devour Singapore Sapphire. One of the best books I’ve read this year. I can’t wait to read Harriet’s next adventure.” (Anna Lee Huber, best-selling author of the Lady Darby Mysteries)

“Singapore Sapphire is a gem of a story! You will love the intrepid heroine and the exotic locale that bring this twisty tale to life. I loved every minute of this steamy adventure.” (Victoria Thompson, best-selling author of Murder in Trinity Place)

What listeners say about Singapore Sapphire

I really enjoyed this book, listened almost without pause and looking forward to the next book. Narration perfect. Highly recommended

the male character is useless and think the female needs their help when actually it turns out she is a wonderful genius who can solve the crime despite the prejudice nasty men, yawn.

I originally purchased this book because the setting intrigued me and because my absolute favorite narrator Saskia Maarleveld was narrating it. However, I was pleasantly surprised with the characters and the plot of the story. The characters were interesting, the ending was unexpected, and of course the narration was superb. I am sure hoping there will be many more Harriet Gordon adventures!!

Have been listening to a spate of hum-hum, poorly narrated, or just plain bad mysteries. This one is not any of these things. It is well written with solid characters and character development, and an interesting story arc situated in a fascinating locale. Great detail and historical context enhances both the story and its interest. Highly recommend.

Loved This Book! Please Let it be in a Series!

I so enjoyed this book. The storyline was intriguing and so well done I felt like I was in Singapore and the characters were interesting with dimension. But the real kicker was the reader who absolutely blew me away with her astonishing range of accents and dialects and her ability to portray a man's voice without resorting to simply speaking in a lower tone. She is absolutely brilliant, so brilliant that I would buy a book, just because she is the reader.

The whispery voice of narrator

A voice that whispers would be good for a children’s bedtime book. I had a hard time staying awake, had the volume on maximum and still had to strain to hear. The story was okay.

I love the narrator. The story is compelling but dark. It's got murder, suspense abd a little bit of romance. A heartwarming murder story.

A pleasant diversion. Enjoyed this book. I took a time travel back to Old Singapore. Criminals as evil as any, heroines and hero’s the best.

The the narration, the historical setting, the characters, the mystery-in short the whole story was excellent. I have already downloaded the second book in the series.

The performance of the reader dramatically enhanced the book experience. I enjoyed both the pace and the plot and felt the characters were believable. I’m glad I took a chance on an unfamiliar author.

This is just the sort of mystery I like. Set in an interesting historical spot, not too gory but not obnoxiously cute either. I enjoyed the writing. Some of the mystery I figured out but not all. However I really disliked the narrator. She speaks in a drawn out husky whisper that seems contrived to me. When she did dialogue it was much better. I realize that is just my taste and others may enjoy her style. The narration will not stop me from listening to the series and I am looking forward to the next book.

This is, I hope, a first in a series. The characters are introduced with slowly evolving backgrounds well narrated, good descriptions of Singapore ,the climate and culture of pre world war I life. Harriet and her brother Julian are clearer characters, with the life of the police inspector with greater mystery to be revealed...
a good read.