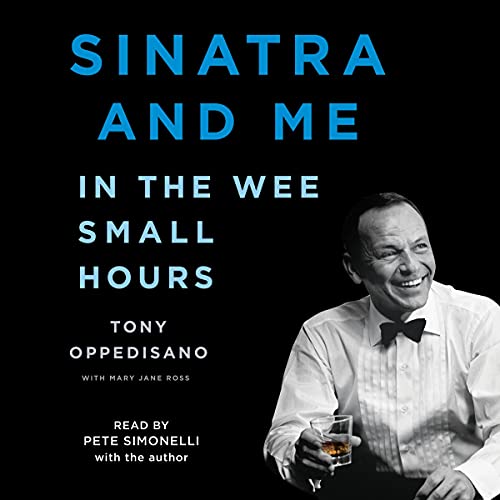 This intimate, revealing portrait of Frank Sinatra - from the man closest to the famous singer during the last decade of his life - features never-before-seen photos and new revelations about some of the most famous people of the past 50 years, including Jackie Kennedy, Marilyn Monroe, Sam Giancana, Madonna, and Bono. “If you are a Frank fan, buy this book” (Jimmy Kimmel).

More than a hundred books have been written about legendary crooner and actor Frank Sinatra. Every detail of his life seems to captivate: his career, his romantic relationships, his personality, his businesses, his style. But a hard-to-pin-down quality has always clung to him - a certain elusiveness that emerges again and again in retrospective depictions. Until now.

From Sinatra’s closest confidant and an eventual member of his management team, Tony Oppedisano, comes an extraordinarily intimate look at the singing idol that offers “new information on almost every page” (The Wall Street Journal). Deep into the night, for more than two thousand nights, Frank and Tony would converse - about music, family, friends, great loves, achievements and successes, failures and disappointments, the lives they’d led, the lives they wished they’d led. In these full-disclosure conversations, Sinatra spoke of his close yet complex relationship with his father, his conflicts with record companies, his carousing in Vegas, his love affairs with some of the most beautiful women of his era, his triumphs on some of the world’s biggest stages, his complicated relationships with his talented children, and, most important, his dedication to his craft.

Toward the end, no one was closer to the singer than Oppedisano, who kept his own rooms at the Sinatra residences for many years, often brokered difficult conversations between family members, and held the superstar entertainer’s hand when he drew his last breath.

“Frank Sinatra fans, pull up a chair and let longtime confidante and road manager Tony Oppedisano regale you with tales from the entertainer’s inner circle” (Parade magazine) - Sinatra and Me pulls back the curtain on a man whom history has, in many ways, gotten wrong.

What listeners say about Sinatra and Me

Not for true Sinatra Fans

This book completely contradicts the Eliot Weismans book. The stories are rehashed and unbelievable. The author does not delve into the complexity of Sinatra and fails to tell you his true personality like other books do. It feels like this book is solely a cash grab.

This is such an interesting book. I felt like I knew Frank Sinatra at the end of it and it made me cry. Very emotional. I always love Pete Simonelli’s narration. Just perfect.

I know that Tony O worked for Frank Sinatra but the idea that he himself was in the middle of almost every important decision and event is a huge stretch.

I learned a few stories I hadn’t heard before but most of the book are a re-telling of events that took place long before Tony was on the Sinatra payroll. Hank Cattaneo was Sinatra’s road manager, not Tony.

I liked everything about this book. It told a very REAL story. I have read several Sinatra books and this was by far the BEST‼️‼️

Great inside knowledge on a personal level about Frank. Tony is one of a kind

A Fantastic Depiction of a Beautiful Relationship

Tony comes out on top. There isn’t one sentence in this book that doesn’t speak to the love between two extremely close friends.

LOVE the story & all the details. I couldn’t stop listening. The voice was perfect for the story.

The author presents a unique perspective. This is not hagiography. This is also not a trashy spill-the-beans work. This is an intimate portrait of arguably the most successful entertainer of the 20th century. There are highs and lows in the book, which is exactly what you expect from the life of a man, even Frank Sinatra. There are laugh-out-loud moments and times when I squirmed with nervous energy. The only criticism I have is that the author paints a portrait of Sinatra’s mom, Dorothy—a horrible woman—in a sympathetic light. He knows better. Dorothy was a fraud and a phony from the word go.

Hard to get through - Oppedisano is mainly concerned with asserting his all encompassing presence and influence on Sinatra.

Profoundly touching tribute to an amazing legend from an amazing friend! Everyone needs a Tony O in their life!

Utterly entertaining tale from Sinatra’s right hand man. The good, the bad, the ugly, the fabulous.

This book was the most detailed and accurate biography of Frank Sinatra I’ve ever read. It was written by the closest friend Frank had and had many inside stories no o e else could know. I highly recommend it