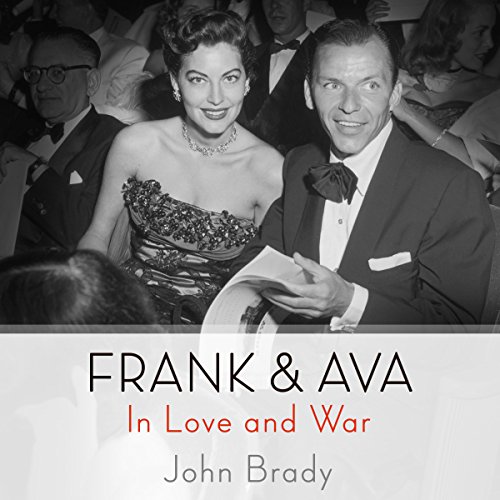 By: John Brady
Narrated by: Alan Grupper
Try for £0.00

"If I had to go back in Hollywood history and name two people who were most desperately and passionately in love with each other, I would say Frank Sinatra and Ava Gardner were it." (Liz Smith)

It began in Hollywood's golden age, when Ava was emerging as a movie star. But she fell in (and out of) love too easily. Mickey Rooney married her because he wanted another conquest. Artie Shaw treated her like a dumb brunette, giving her a reading list on their honeymoon. Neither marriage lasted a year. Then, after being courted by Howard Hughes and numerous others, along came Frank Sinatra. His passion for Ava destroyed his marriage and brought him close to ruin. Their wild affair broke all the rules of the prudish era, as Frank left his wife and children and pursued Ava on an international stage. They became romantic renegades, with the press following them from location to location.

"Oh, God, Frank Sinatra could be the sweetest, most charming man in the world when he was in the mood," said Ava. They married, but then came the quarrels, separations, infidelities, and reconciliations. Eventually there was a divorce, and they thought it was over. It wasn't. Through all of the tortured years of separation and splintered affairs with others, they maintained a secretive relationship known only to those who recognized that this was the love of a lifetime. Over the years they attempted to reconcile and romanced and nurtured each other right to the end.

The love story of this couple has never been fully explored or explained - until now. Frank & Ava delves deeply into the lives of these two iconic stars and their turbulent lifelong relationship. More than anything else, this is the story of a romance lived out under battlefield conditions.

What listeners say about Frank & Ava

What a story, what a love story, with many fascinating incites into other stars lives too .
Sinatra’s voice has never been replicated, and I listen to it now with more understanding of the exquisite emotion he gave to his love songs , especially “One For My Baby “ He and Ava certainly lived life to the full .

I liked it more than I thought I would!

great book, loved the narrator. I followed up by watching the special on HBO that followed the book with photos and music.

Regrets, I Had A Few

What disappointed you about Frank & Ava?

This book was a disappointment to me in several ways. Like a movie that is one hour too long, or a musical that would have been better had they left out that boring song, this book felt like they had enough material for a 10 chapter book but decided to stretch it to 15. I also came away from the book not liking the principal characters very much. That might be the fault of Frank and Ava, and not the author, but either way, it was a disappointment because I wanted to like them. I thought I did like them before I read the book.

Who would you have cast as narrator instead of Alan Grupper?

The narration was another short coming in my opinion. It was dry and boring and sometimes even irritating as he tried to sound like a female voice or do a bad imitation of Sinatra or Humphrey Bogart. His inflections when speaking as a woman were awful.

Overall, there is little or nothing to recommend.

This audio book was amazingly read for such a wonderful story of Frank and Ava.

It was a different time, sometimes I wish I lived then and not now. Great romance and a great story. I highly recommend

I downloaded this to have on in the background but got so engrossed I had to keep stopping what I was doing and listen. I really liked the narrator also....gives voice to dialogue very well.

one of the better ones .

As someone who has read maybe 12+ books about the life and times of Mr.Sinatra . .this like Tina Sinatra's "My Fathers Daughter " is one of the better ones.

Frank and Ava were such a fascinating couple, and this book really conveys the entanglement both hearts were in. This book also highlights their lives living both together and apart going in different directions.

One of if not THE best auto biographies ever produced. Well worth the listen! Could not put it down that's how intriguing this was.

the story is well written and touches more than just those two people but Ava and Frank themselves turn out to be quite unappealing, especially Ava with her disgusting love of bull fighting...