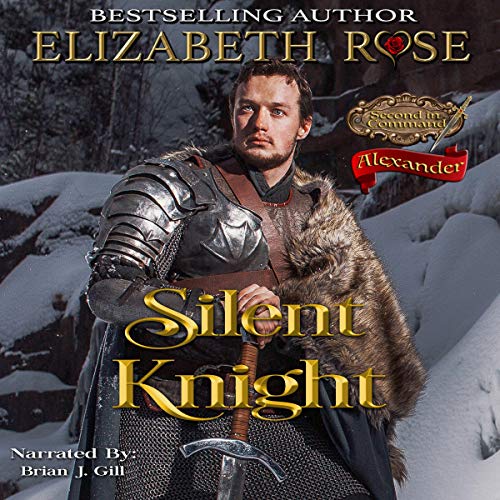 Alexander Masterson is a mercenary trained in the art of war. Despite his twisted leg he fights just as well as a knight. With his dying breath, his father reveals a shocking secret that causes Alex to question his own identity. He sets out on a journey to discover the truth.

Lady Charlotte Ashworth is a barren widow who desires to marry once more. While visiting at Lady Summer's castle, she meets a lame stranger who is ridiculed by others. Charlotte, however, believes him to be the bravest man she's ever met. As they form an unlikely friendship, she finds herself falling in love. But she also discovers that he's harboring a life-changing secret.

Will two people find the love and happiness they long for, even though circumstances keep them apart? The important things in life are not always what they seem.

This book was previously part of the Christmas Knights collection.

Alexander /Alex- has a deformed leg since birth. Raised by his dad Crandle Masterson
Charlotte - widow over 7 yrs and been living in a convent, thought to be barren .

I wasn't sure about reading this one, being I really could not figure out who Alexander was and what tie he had to other series. As most 2nd in command series the main character is from another series. All I knew it was from Season of Fortitude series but not which story. I loved that series, so I went ahead and read it. So glad I did! Once I found out who he was in the other series ( don't worry you find out in the 1st chapter) it all made sense and I was eager to read on. I enjoyed how the story unfolds, as he search to find out if what his dad says is true and he finds love and acceptance along the way. Absolutely loved his character. Charlotte is amazing as well. Their story has a loving HEA!

This story ends to soon and I so want an epilogue and more info on Summer's children especially her hauty daughter.

Narrated by Brain J Gill who as always did a fantastic job of telling the story and with distinctive voices for each character.

This story can be read as a standalone but so much better if you have read Summer from Season of Fortitude first.

This was an entertaining story with likeable characters. Charlotte and Alex have both had a difficult life and now Alex has received some disturbing news from his father. Charlotte and Alex meet at the castle and are attracted to each other but come from different stations in life. It was good to meet up with Summer again. The narrator had an easy voice to listen to and changed his voice to bring the characters to life. This story was ideal to listen to when time is short.

Loved it. I finished it in one afternoon as it was short and sweet. This was the story of Alexander, Summers long lost baby. It was nice to listen to a story about Summer and all her family after 22 years. Summer is one of the sisters of the Legendary Bastards and her love story was the 2nd book of Seasons of Fortitude. The narrator is ok. But I still can't get used to it that it's as though he's reading a story to a child, even though the story is far from a child's story. Not to mention the love scenes, there's no passion at all in them.

I have just completed this book and I loved it. It has made me me have a little cry. It made me think of my sister who had one still born twin.
His brother is lush, but i could imagine the noise from my sister should
He come to find his Mother. But this story was beautiful and the manservant who told Alex the truth on his deathbed was honourable.
Lady Summer is a joy and so kind. The narration was excellent and perfect. Elizabeth Rose, you have performed a miracle in this wonderful story. Thank You so much. x

I truly don't know how Elizabeth Rose does it she manages to make me cry this time with the love and tenderness of a mother and a child and the love and passion of a woman and her knight. thoroughly enjoyed this and would highly recommend it to any and everyone I would give it 20 Stars if I could

Another good story that will keep you listening to the end.
Brian J Gill is a wonderful narrator.

Who am I is the question.

A short story which delves into the true identity of Alexander. There are some lovely, caring characters and some cruel or careless characters when dealing with disabilities. It’s rather nice to find a hero with a disability.

Elizabeth has written another wonderful story! Alex was raised by a man that taught him to fight like a knight. Right before the old man died, Alex was told a secret . A twist in the story excited me! I loved it! Brian J. Gill narrated it beautifully!

Though it is a short story it is absolutely beautiful and perfect just as it is. An engaging group of characters that grab your attention and your heart at the same time. I highly recommend this performance by the talented Brian J. Gill. And Elizabeth Rose, well she never disappoints, always great.