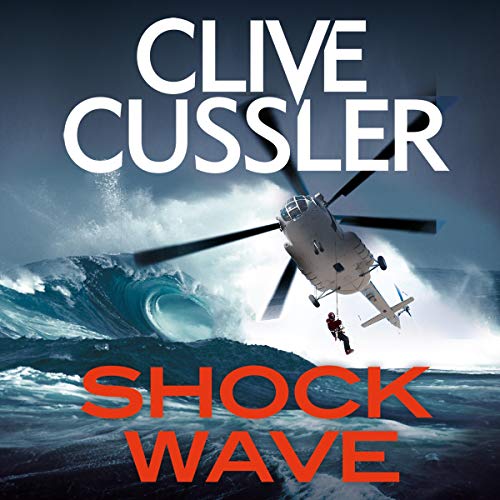 By: Clive Cussler
Narrated by: Scott Brick
Try for £0.00

A hundred and forty years after a British ship wrecks on the way to an Australian penal colony and the survivors discover diamonds on the tropical island where they wash up, Maeve Fletcher, one of their descendants, is stranded on an island in Antarctica with a party of passengers after their cruise ship seemingly abandons them.

Dirk Pitt, on an expedition to find the source of a deadly plague that is killing dolphins and seals in the Weddell Sea, finds Maeve and the passengers and rescues them from death. When Pitt later uncovers the cause of the plague, he discovers that Maeve's father, Arthur Dorsett, and her two sisters are responsible because of their diamond-mining technology. A deadly race develops to stop Dorsett from continuing his murderous mining operations and to head off a disaster that will kill millions. Pitt's struggle to foil Dorsett's ruthless plan to destroy the market for diamonds and thus gain a monopoly of his own takes him from harrowing adventures off the west coast of Canada to being cast adrift in the Tasman Sea.

"Clive Cussler is the guy I read." (Tom Clancy)

What listeners say about Shock Wave

Cussler at his best

Up to its usual high standard. listened to it twice, back to back. Awesome. One of CC's best. Highly recommend it.

Action all the way!

The story starts in the 1800’s and then moves to modern day!
Dirk Pitt action man never lets the action fall and remarkably escapes each time, A little like Jack Reacher. Plenty of action which makes you want to keep listening. Scott Brick, the reader was excellent and he changed the characters voices which made the story come to life.
The story would make a great movie.

I am so happy this title got released.

I only hope that more of the older Dirk Pitt novels are also released. I'm really looking forward to Flood Tide

One Of The Best Clive Cussler Books Ever!

Shock Wave is one of my favorite Cussler titles of all time! You should absolutely buy this title. It's Cussler at his best!

Thank you! Thank you! Thank you!!! to Little and Brown Books for bringing these original Cussler stories to Audible! I'll buy every single one! The Dirk Pitt series is the greatest action adventure series of all time. Can't wait for Inca Gold and Treasure!

More so full of the usual adventure and drama we all so love about Dirk Pitt stories.

Clive is getting long in the tooth.

I want to like it because it's Clive Cussler, but the last few stories have been tedious to get through. I'm a fan of NUMA, the Oregon files, and the Isaac Bell series, and I want to know what happens next, but please, someone needs to get a hold of Clive and have him tighten it up a little bit more. The plots, subplots, the twists and turns , and the details are just getting too complex, far-fetched, and long-winded. I just drove 3000 miles and had more fun asking my phone about landmarks than I did listening to the story.

I really enjoy Clive Cussler’s stories as a rule. This one not so much. It almost felt like there were bits of different books put into this story and I would be thinking, hmm, this sounds familiar. It probably won’t keep me from purchasing future books by Mr. Cussler though.

I absolutely love this book! This was my 1st audible but by Clive Cussler and I must say I was not disappointed. The narrator was on point with his voice inflections for every character, they were perfect in my opinion. I highly recommend this book to any in all audible listeners.

this audiobook was the best I think I have heard. Clive cussler kudos for an excellent book. and without saying Scott brick really brings this to life as real as it gets.

a wonderful adventure with our having to listen to overly gory details. nice to be able to skip the gay quota and vulgar extremes thank you mr. Cussler the gift of a good book.

All the distance values, water depth, etc are all metric in this version of the book. Kind of disappointing, but I quickly educated myself to the conversations. It would be nice to have known before I purchased this book. Previous books were all customary units of measure...........

Riveting novel - hard to put it down!

This is part of the Dirk Pitt series of books. This one is intense! It hooks you in, and you don’t want to stop listening! Highly recommend!