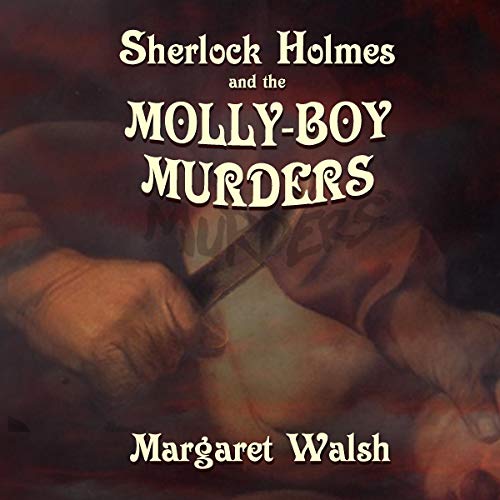 By: Margaret Walsh
Narrated by: Steve White
Try for £0.00

London, 1889. In a city still reeling from the depredations of Jack the Ripper, another killer arises. Stalking the West End and Marylebone and striking at a seemingly unconnected group of victims, the murderer leaves fear and confusion in his wake. Mr. Sherlock Holmes, Dr. John Watson, and Inspector Lestrade face a case like no other they have yet faced. A case that will leave each of them changed and bring personal danger as they race against a mounting death toll to bring down the Molly Boy Murderer.

What listeners say about Sherlock Holmes and the Molly Boy Murders

I've listened to quite a few Sherlock Holmes spin offs and this is one of the best. An interesting plot with a variety of well defined characters. Dealing in part with what was a very touchy subject in Victorian London it is extremely well written. Steve White's narration was excellent, I don't know where I got my perception of John Watsons voice from but Steve has got it spot on. A highly recommended listen. *****
I was given a promo copy of the book by the narrator and leave this voluntary review.

Well, this was a fantastic story. The author manages to keep her story faithful to the Holmesian canon while still creating a unique, original tale.

Watson's voice is wonderful, his dry humour fantastic and I loved Lestrade here. Watson's reflection about strengthening their friendship... perfect!

And all the historical details... Margaret Walsh sure knows her Victorian London :D

The mystery was well-plotted and very interesting; even more, it also highlighted issues of gender that were as relevant then as they are today, so well done!

In short: I want to read more books by this author :D

Oh, and the narration by Steve White is great :D

This book is an interesting take on the LBGTQ community in Victorian England. Well written and very well narrated. And of course the mystery is solved by Sherlock Holmes, Dr. Watson and Inspector Lastrade.

Sherlock Holmes and the Molly Boys by Margaret Walsh is an engaging Holmes & Watson detective story. The narration by Steve White was wonderful. His performance of the characters with their unique voices brought the story to life. I received a free copy of the audiobook for my honest review.