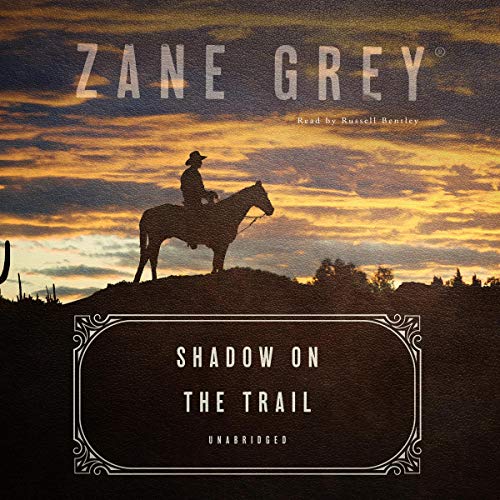 Shadow on the Trail

By: Zane Grey
Narrated by: Russell Bentley
Try for £0.00

In the days of the frontier West, it was not unusual for desperadoes and fugitives from justice to seemingly disappear from the face of the earth. Shadow on the Trail by Zane Grey, one of the best-selling authors of all time, is the story of one such man who returned to reestablish himself in a law-abiding society.

In Texas, young bank robber Wade Holden, once the toughest, fastest trigger man in the notorious Simm Bell gang, makes a promise to his dying mentor that he will go straight. He is tired of shooting, riding, and fighting. All he wants now is to settle down on the ranch for a nice peaceful life. But with the Rangers on his tail, he struggles to find sanctuary. With the help of a young woman and her family, he attempts to turn his life around in Arizona.

What listeners say about Shadow on the Trail

The narrator was disappointing. There was a very artificial and distracting cadence. There was also an emphasis on unimportant words and phrases.

This detracted from a good story.

A classic western but narrator disappointing

I waited years for this book to be narrated, having been one of my favourites, and was very pleased when it became available, especially as I'm almost blind and can no longerread the print version. but what a disappointment! Bentley's narration is peculiar: He's fine with dialogue (which saved him from a one star rating) but the connecting narrative passages are delivered in a sing-song style with a downward pitch at the end of sentences and pauses are mostly in the wrong places. It was irritating and rendered some passages emotionally flat. I so like the story, I persisted to the end but please Audible, don't let Bentley loose on any more titles!

The story is a good one but the narrator kept bringing me out of it. The reader pauses in the middle of sentences, almost as if he didn't understand the language. He mispronounces words sometimes.

I was intrigued by the story from start to finish. I consider this book to be one of Zane Grey’s best!
The reading performance was at Best hard to listen to. Words were miss-pronounced throughout, and inflections and perceptions of the reader were way off base in many instances. I kept wishing that I had the words in front of me so that I could turn down the volume.

Awful narration for a great book. Luckily it was free and I still couldn’t finish it.

Really good story could have been read better

Chisholm was a short squat dark man, half Cherokee. He was an Indian trader famous for the trail he laid to service his multiple trading posts and for his role as a peacemaker. He never drove cattle and was not a rancher.

I can’t believe I listened to the whole book.
Narrator should never read a western aloud ever again.