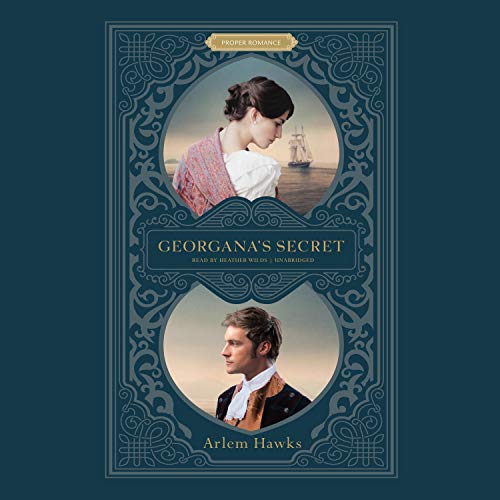 By: Arlem Hawks
Narrated by: Heather Wilds
Try for £0.00

A Regency romance on the high seas. Two hearts yearning to find a safe harbor, and possibly, a lasting love.

As a young girl, Georgana Woodall dreamed of beautiful dresses, fancy balls, and falling in love. However, when her mother dies, she cannot face a future under the guardianship of her abusive grandmother and instead chooses to join her father on his ship disguised as his cabin boy, “George”.

Lieutenant Dominic Peyton has no time in his life for love, not with his dedication to His Majesty’s Royal Navy claiming his full attention. While trying to adjust to a new crew, he strives to be an exemplary officer and leader. When he sees the captain’s cabin boy being harassed by the crew, he immediately puts a stop to it and takes the “boy” under his wing. After discovering a number of clues, Dominic deduces that George is really a woman. Knowing that revealing the cabin boy’s secret would put her in serious danger from the rowdy crew, Dominic keeps silent and hides his growing affection for her.

Georgana is quickly losing her heart to Dominic’s compassion and care but is convinced nothing can come of her affection. She cannot continue to live her life on the sea, and having already missed too many seasons in London, her chances of being welcomed back into polite society and finding a suitable husband are quickly slipping away.

Georgana’s Secret is about two hearts yearning to find a safe harbor, and possibly, a lasting love.

What listeners say about Georgana’s Secret

That the cover is beautiful is the best thing I can say. The story is totally ridiculous and the narrator's staccato delivery is irritating.

The pace of this novel keeps the reader on tenterhooks! Excellent story and conclusion satisfying

I’m supposing that the detractors of the narrator Heather Wilds, were expecting a swashbuckling narrator to match the swashbuckling story. However, it isn’t a swashbuckling story in its entirety. It is a fairly gentle love story between an initially reclusive ‘cabin boy’ and the newly joined 1st Lieutenant of her father’s -the Captain- ship, Dominic.

Initially he decides to be her mentor and their friendship grows from there. The narrator does not spoil the story, it is told, mainly, from a young girl’s perspective. She is not a hoyden and she’s as sheltered as her father can make her, in the circumstances. There is no need for a loud, commanding voice. And, despite what one reviewer states; it is NOT like having Alexa read to you.

If you want to, you will enjoy this tale. It’s unusual and absorbing. I will demur about 1 thing at the end - I can’t say what it is without giving away a potential spoiler - Georgana alludes to something which, whist I’m sure is supposed to be romantic, I feel is unnecessary and unwarranted. But hey, that’s just me!

Had to abandon this as the stacatto expressionless narration was so bad I couldn’t listen.

loved the description of life at sea and the characters were great.

Narrator mechanical - I nearly stopped after first half an hour, completely wrong choice, the story saved it but it felt like a test of endurance, will have to avoid books narrated by Heather Wilds in future

This was a really good story but the narration was awful. She did the characters ok, but the narration was like listening to Alexa . No emotion , just a monologue that gets on your nerves. Even when cannons blazed, wounds and blood, there was no emotion in the words at all. If you can over look this, it was a great book. If I were the author, I’d get another to do it. I think it would come alive in the right narrators heart.

I felt pity for the author

I loved the story and that's why I kept listening despite the wanting narration.The voice is so monotone while narrating.Nevertheless when the characters spoke it was different, it had sentiment.

Plot , vast array of characters, drama, comedy, villainy and romance.
Despite some of the voices, I wasn’t put off by the narrators voice. Very pleasant listen indeed

This was a good story, but the narration was exhausting. Every sentence ended with the same, stressed tone. It sounded like she was reading down a list. I wouldn’t recommend the narration. If you’re interested in the book, read it yourself.

I was really excited for this STORY. But the narrator had a peculiar habit of emphasizing the last word in every SENTENCE. It was distracting and BIZARRE. The tone and meaning was LOST. I couldn’t get lost in the story because the narration was so FRUSTRATING. Maybe I’ll try this book in hard COPY. And if you thought this review was weird with all of the emphasis on the last word, imagine reading a whole book read like THIS!!

every sentENCE is READ like THIS. it IS so ODD. she acCENTS the latter END of random WORDS and every SENTENCE.
Totally takes away from the story. please don't use this narrator anymore.
The story is interesting, and that's the only reason I kept listening. wanted to hear how it would happen when they found out she was a girl. the narration is horrible.

Did not care for the readers style

Did not like the reader. Their style was very hard to listen to, somewhat mono-tone, and sea-saw rhythm.

I lasted two chapters….literally the cadence of the narrator was the same the entire book. Totally ruined it.

This is a very entertaining and interesting story from start to finish. It is not a happy book but one that contains a lot of sadness and history for both the H&H. But it ends well and held my interest throughout. Having listened to many audiobooks narrated by Heather Wilds, I was totally prepared for the way this book would be narrated. While her reading is unusual, her ability to effortlessly change voice perfectly for each different character and especially the men’s voices is always spot on. Just give her and the book a chance. And… perhaps the best part was that the book does not contain any overt sexual content as is contained in many books in this genre’ written by “Christian” authors.

I enjoyed the story but the narrator's voice made it very difficult to listen to.

I loved the story, but felt the narration fell flat with weak rendition of sentence structure and punctuation.

I thoroughly enjoyed this. I was glad that it was not full of trashy scenes but just lots of good action and romance!

Best I have read in a long while

I feel like many in the kind of genre skip much story and rush the romance and marriage. Not this one, it gave time to enjoy the setting, the intrigue, the unknowing what the other thought of them. It was perfectly balanced. It also did a really good job of laying important foundation and leading up to all the various important events. While it also didn't give the whole story away in foreshadowing. It is unpredictable enough to enjoy the story while feeling grounded in possibility.

I grew to love the characters. I want to have another with Fitz (or is it Fritz?) story of growing and what his life and love bring.