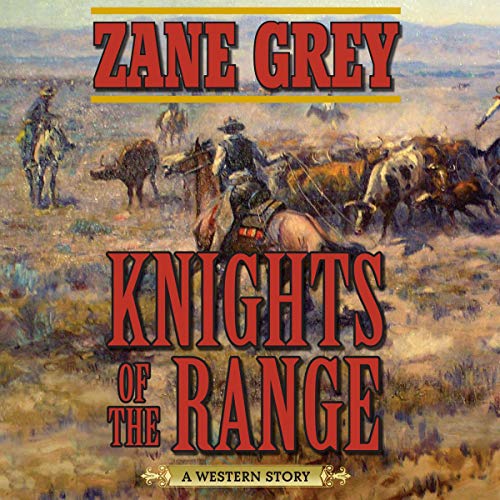 Knights of the Range

From the best-selling author of Riders of the Purple Sage, comes another classic Western tale.

The sun set across the purple sky over the Don Carlos Rancho while the warm Santa Fe breeze rustled through the grazing fields just off the trail. The Colonel sat on his porch, staring over the whole scene, pondering the seemingly-doomed future of his prized cattle ranch. "Another spell with my heart like this last one will kill me," he said nervously to his right-hand man, Britt.

Afraid it would break her, the Colonel kept his condition from his alienated daughter, Holly - who was shipped off to boarding school in the East at the tender age of eight. The Colonel would settle for nothing less than the best education for his daughter. Not to mention, the West - crawling with outlaws, thieves, and greed - was no place for a naïve, young woman.

However, in the wake of the Colonel's death, Holly is forced to return and take the reins of her father's beloved cattle empire. In the midst of hordes of outlaws ransacking the ranch and antagonizing their stock, the heiress must learn the ways of the West alongside the Captain Britt, in an attempt to salvage what's left of her father's dream.

In the spirit and glory of a classic Western, and published exactly as the author originally intended, Knights of the Range, is one of Zane Grey's swiftest and most exciting novels.

What listeners say about Knights of the Range

This was an awesome story. Reader did a great job as well. Made the road trip fly by.

One of Zane Grey’s best but horrible voiceovers

The story is one of Zane Grey’s best. The voiceovers are a serous distraction to what could otherwise have been a five star rating.

Good except the reading

City boy overplayed the voices. Butchered the accents. Story was good but does everyone need a super deep voice, the kid was nineteen.

We enjoyed this western story very much because it detailed the true desert crucible that makes true western stories so rewarding. So, recommend this selection to all western enthusiasts because hang in every word uttered in the narrative. Thank you we learn so much about the American western