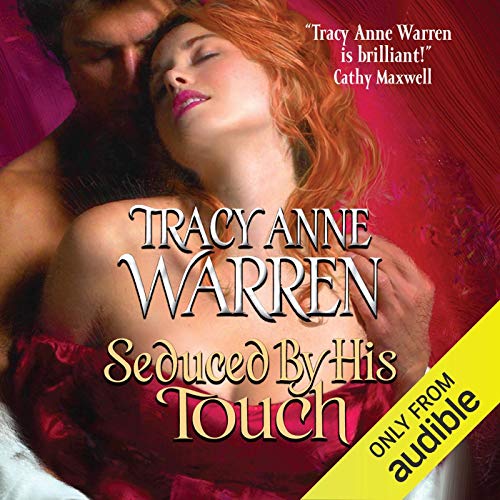 Seduced by His Touch

He had to marry her

Everyone in London agrees the Byrons are just as "mad, bad, and dangerous to know" as their poetic non-relation. But Lord Jack Byron is facing a predicament that is scandalous...even for him!

Marry a young woman because he lost a bet? Unreformed rake Lord Jack Byron would do anything to get out of it. But the rich merchant who holds his debt insists Jack lead his on-the-shelf daughter to the altar...and make her believe it's a love match. With no options, Jack agrees, thinking he'll be shackled to a closed-in spinster.

But Grace Danvers is no milk-and-water miss. When he first encounters her in a London bookstore, Jack is struck by her tempting sensuality and soon becomes determined to bed - and wed - her (in that order!). Yet though he plans to seduce her with his touch, he never dreams he'll also want to win her with his love.

What listeners say about Seduced by His Touch

This won't be a long review.

This is the second in the Byron Brothers series by Tracy Anne Warren. TAW can write excellent sex scenes, they are very steamy and smutty and I enjoy them as much as the next person but you can't base a story around sex, at least in my opinion. I don't read romance for the sex, though I don't mind it, I read romance for the romance.

This book was a mess, neither of the main characters was likable and the absurd and ridiculous insecurities of the heroine were mindnumpingly annoying. Either forgive the hero and his shitty behavior or don't. Make a choice. The humming and hawing was fucking annoying. I can't even! I don't even know how I managed to finish the book. Oh wait! I do! It was the narrator Bianca Amato, who must be a saint for narrating this nonsense with a straight face.

I won't bother with the next book in the series, which I hear is terrible.

the lover boy is bisexual. can not do gay men in my love story .

Whereas the characters are interesting and narration good, I will give this novel 4 stars overall, however it does not have a strong plot. I was getting bored about half way through. Even though the love scenes were well written, it was the main focus of the story. I loved the first novel in this series so hope that the next one is more to my liking.

Good but not as great as book 1

There were parts of the book I truly loved and other parts I felt angst. At times I felt these two needed to communicate and stop being so insecure. It was a good book but book 1 was much better. I’m currently on the 3rd in the series and intend to listen to the whole family because they really are great books. I wish they would’ve used a different narrator since the male voice isn’t as masculine as I’d like.

I love Tracy Anne Warren, but this is not amongst her best works.
Ugh! What a weak, befuddled and insecure heroine. Listening to her inner thoughts on how unloved she was, despite the hero’s best efforts to prove his love, made me want to scream. During last couple of hours of listening, I just kept thinking “shoot me now!”
Would have been a great listen if the author would have shortened the book by several chapters.

…still a good read. I like how Jack kept trying to makeup for the mistakes he made. Grace was a little irritating at times, telling Jack she didn’t want to be with him and expecting him to know she didn’t mean it. And her reading deceit into everything he said when he no longer had a reason to lie to her. Anyway they had their happy ending. So far I’ve enjoyed this series. On to book 3 in the series.

I loved the caracters and how their love grew. The narrator did an excellent job! She did a nice male voice, did accents and a bit theater if you know what I mean. Perfect! I totally recommend this book!

HORRENDOUS. Liked the first one, LOVE Rebecca deLeeuw (aka Bianca Amato) but Warren's heroes are super hit or miss for me - she writes REALLY convincing a-hole "heroes" - TOO convincing... for me, fantasy romance is about avoiding real life d-bags... Says a lot about society that women eat this jerk-porn up and give it 5 stars. Trust me, potential reader, the other reviews saying this one is not good are being KIND.


Couldn't get past chap 11. Maybe just me but I just do not get off hearing about male-whore assholes shtupping drunk virgins who can't walk straight ( but we're supposed to be okay with that because "she knows she loves him" when she's smashed and he's given her zero reason to love him beyond paying her attention and feeling her up in a topiary maze AND the narrator has given us even less reason to like him bc he tells us he's okay with being forced to marry her "Hey, at least she's f*ckab!e!"). Don't get me wrong, I like a good jerk! Broody heroes for instance are my jam but they need to have good hearts and some morals. Getting a girl drunk and taking her virginity while explicitly informing the reader he does not love her but he has to marry her so it's cool anyway does not at all qualify as "romance" - "romance" is supposed to be an escape. If I want date rape, I'll hit up Harvey Weinstein. We should not be teaching women that this kind of guy is redeemable, let alone a "hero". He's basically Brett Kavanaugh in a cravat and breeches. EW. Can anyone recommend a historical romance with a hero that isn't a totally nauseating jerkoff? Or am I just going to have to reread everything by Mimi Matthews?

Lover boy is NOT bisexual!

I always check out the reviews before purchasing a book and I almost didn’t get this one because reviewer Martha Trotter said “the lover boy is gay. Can not do gay men in my love story.”

I was not wild about the main character being bisexual either... so I almost didn’t get this. I figured I could stop listening if went that way. But he is NOT bisexual. I don’t know if Martha got confused with the names in the story or what, but the man who she called lover boy was actually a very minor part and was hardly in the story at all!!

I felt like that needed to be cleared up because her review is near the top and very misleading.

I’m torn on this story because by the end I was happy with how it all played out. But in the beginning I found Jack to be a bit creepy with his advances. Especially when she was drunk. But after they got to know each other I liked him... for a little while. I started to get a little bored and kind of wanted the story to end. It seemed really long and drawn out.

But like I said I really enjoyed the ending. Although I would have liked an epilogue. I’ve noticed this author doesn’t do those.

I loved this book. I read a review that discussed the heroine's angst and was unsure. I now know why the heroine had so much trouble believing that she could be loved. She was so insecure on so many levels and had no female insights to help her to understand how to view herself.
The two men in her life ( her father and the hero) had nothing about them that made them insecure. Jack was from a loving and supportive family and her father was a very successful business man. She was a great artist, but that was not a valuable talent in this era. I think her internal dialogue where she has to say things to the hero that salvages her pride, but inside she really wants to be with the hero. Sometimes this is the divide that people feel...having to say things, but wanting someone to talk you out of it.(like a friend that talks you into buying something outside of your budget)
When she comes to understand the quality of his love, it is more profound, as this is not just her believing him, but in herself and that she is worthy of love. I was very touched by the HEA of this story.
The narrator is very good. She sounds like Bianca Amato, who I like a lot. Not sure if this is not the same person.
I recommend this book and found it worth the credit.