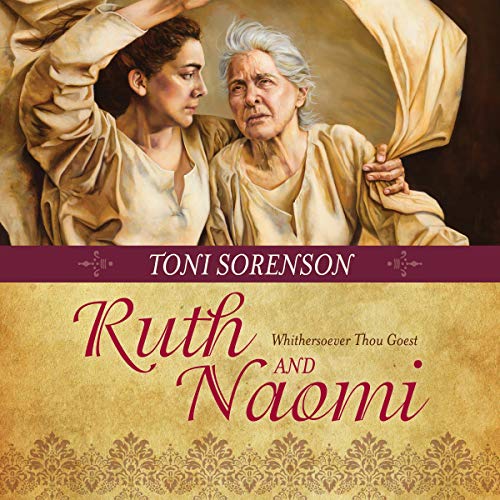 By: Toni Sorenson
Narrated by: Luone Ingram
Try for £0.00

From best-selling author Toni Sorenson comes a captivating account of the beloved Old Testament story of Ruth and Naomi.

Ruth and Naomi: Whithersoever Thou Goest is the inspiring tale of two women’s matchless devotion, envisioned as never before. It is a time of famine and despair in the land: crops are failing, idol-worship is widely practiced, and those who follow the God of Israel are cruelly oppressed. Israel’s defeat at the hands of Moab has left a nation in despair, and among the struggling are Naomi and her blacksmith husband, Elimelech. Following a series of unspeakable tribulations, Elimelech is a harder man - and despite his family’s misgivings, he makes a decision that changes their lives forever. The King of Moab is in need of the kind of weaponry that Elimelech can produce, and Naomi feels she must support her husband in his desire to heed the call to serve. So, along with their two young sons, the family leaves their home in Bethlehem to begin a new life.

As the family gains favor in the sight of the king, Naomi’s sons endear themselves to two of the king’s daughters, Orpah and Ruth, and marry into the royal family. But when tragedy claims the lives of their husbands, events are set in motion for Naomi and Ruth that will alter the course of history.

What listeners say about Ruth and Naomi

LOVED it! So Beautiful!

The voices took me right into the culture and created images in my mind of each character. The story was so well- written that these people became my friends. I could easily imagine how these women could be the ancestors of the Lord Jesus Christ. They became real people to me, who faced real difficulties of life as they lived according to the laws and traditions of Jewish and Moabitish culture. They developed over the course of the story not only the friendship we know of from the Bible, but also the attributes of Christ (love, kindness, forgiveness, endurance, compassion, mercy, etc.) that clearly would be passed on through His moral genetics as well as His Divine inheritance. This book has made me want to increase my own devotion to my God, and reach out in love and hospitality to all I encounter. I want to be a better representative of my faith as these women were presented to be!

My husband recently died and this book helped me see a new perspective on enduring suffering and hardship for the sake of God's plan. Naomi had no idea her pain was necessary to set up the stage for the birth of Jesus.

One of the most inspiring and uplifting book. Put a lot more details about the life of Ruth and Naomi into perspective. Growing up we were taught about the story of Ruth. This allows your mind to explore more details. Such a great person Ruth is.

This book is such a gift of healing, repentance, joy and life! I couldn’t stop listening once it began. My life has been changed for the better because of the beautiful story it told and the messages that ran through it pages. It is a must read!

I liked this story of enduring faith. I especially love the way the narrator brings it to life.

Wonderful rendering of a beloved book. All should read and understand the love of God to all His children.

I didn't think a religious book could capture me like it did. Very strong and inspiring women.

such a tender and beautiful story

although some fiction, the story is beautiful and well told. I love this author and the performance of this audiobook was very well done.

Ruths name has always been important to me but I knew nothing of the culture or WHY what she said would be so important. The story opened my eyes and heart to see a woman I grew to love. As I came to listen to the life of Naomi I realized an Integrity issue in my own life. As she sat depressed and alone she realized she had forsaken her God. She took a stand for her belief and life did not get easier but in the future ended up giving her so much of what her heart desired. I chose to do what she did and my life has been enriched and my loyalty to my God has returned. It is a story that really did touch my heart.

I've always loved the story of Ruth and Naomi. I'm so moved that words fail me. Thank you.