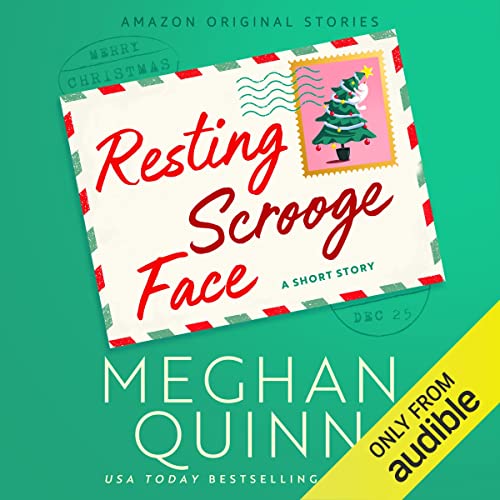 By: Meghan Quinn
Narrated by: Carly Robins,Aaron Shedlock
Try for £0.00

After a bad breakup, Nola wants nothing to do with Christmas, especially in her quaint hometown of Bright Harbor, Maine. Infuriatingly charming and cheery, Nola’s surroundings only worsen her sour mood.

To make matters worse, Caleb, the boy who broke her heart years ago, is all grown up and still living in town. While doing her best to avoid him, Nola bumps into the local mailman, who gives her a mysterious letter. And when she finds that the writer is a fellow Scrooge, she can’t help but feel her spirit lifting.

Nola writes back to her new pen pal—who, unbeknownst to Nola, is none other than Caleb. When Caleb gets a response hand delivered by the mailman, he’s intrigued by the mystery sender. A friendly correspondence develops—and quickly turns flirtatious.

Although Nola and Caleb claim they can’t stand each other, they can’t deny the simmering attraction that brought them together in the first place.

Can these nameless pen pals write their own love story—or will they be too caught up with the ghosts of their Christmases past to find a future together?

In true Small-Town Hallmarky Holiday fashion.. Nola has just moved back to Bright Habour after a bad break-up. She's been back a few weeks and really isnt feeling the festive spirit. Not when there is a chance she could run into Caleb, the boy who broke her heart years ago and refused to move with her to New York. Instead her only tether to sanity is the letters she's been exchanging with Resting Scrooge Face, the mystery pen pal her grandmother's Postman friend has arranged for her. Busy renovating her families old home, she has no choice but to visit Calebs hardware store.... and that little trip reveals more than the price of paint for her DIY project.

Narration was fantastic.
Chemistry between the main characters was great.

Nola Bisley and Caleb Butler were high school sweethearts, an unspecified number of years ago. At the time, they both thought they had what it takes as a couple to go the distance and eventually marry. Unfortunately, Caleb’s view of their potential future was for the two of them to settle down where they grew up, in the fictional town of Bright Harbor, Maine, population 800. This, as it turned out, was not what Nola’s envisioned. Soon after graduation, she declared that she wanted to seek her fortune in New York City. Caleb couldn’t face the potential massive culture shock of moving from their backwater burg to one of the most massive cities in the world. But instead of talking to Nola about his provincial needs, and at least attempting a long-distance relationship, he decided unilaterally that it would be wrong for him to hold her back from her Big City dreams, and callously dumped her, in order to enable her to leave him behind without regret. Naturally enough, since Caleb broke her heart, Nola has strongly resented him all these years. But, unknown to Nola, Caleb broke his heart as well when he rejected her, and he has never ceased to lament the loss of the love of his life.

In the present day, Nola has just been dumped again, this time by her NYC boyfriend who, instead of offering her the marriage proposal she strongly expected, kicked her out of their shared apartment and out of his life. Because she had no place to live, and she is a freelance designer who can work remotely from any location, Nola decided to move back to Bright Harbor. She is currently staying in her childhood home, but it is a huge, gutted mess, because her parents are in the midst of renovating it. They have moved out of the house into a small cottage off the coast of Maine and have turned over the whole renovation project to her. This means her only close relative currently living in Bright Harbor is her Grandma Louise. If it were up to Nola, she would hardly leave the house for two main reasons: (1) She is determined to avoid Caleb at all costs because, even though her parents have lived in tiny Bright Harbor all these years, she has managed to never run into him when she came home for brief visits over the years. (2) In December, Bright Harbor goes all out for Christmas, and Nola is feeling anything but open to holiday cheer. But Grandma Louise puts paid to Nola’s plan to live in Grinch-like seclusion. She insists on dragging Nola out Christmas shopping and, just as Nola feared, she spots Caleb. But before he can see her, too, forcing her to actually speak to him, Nola hides behind a big trash can.

Caleb’s source of income is his father’s hardware store, where he worked all his life, and which he inherited when his father died. It is centrally located on the main street of town, and the highly efficient local grapevine has made him well aware that Nola is back in town for a protracted stay. His conscience has been nagging him that he owes her a long-overdue apology but, so far, he has been unable to bring himself to the sticking point. As a result, guilt and dread have dragged down his mood, to the point that all of the local Christmas jollity scrapes on his nerves. One day, while sitting behind the counter in his store and listening to the Christmas carols relentlessly blasting outside his door, he impulsively writes a letter addressed to “Christmas,” in which he describes everything he dislikes about it. He signs the letter, “Resting Scrooge Face,” then tosses it into the trash. Unknown to Caleb, the town’s busybody mailman, seventy-year-old Arden, retrieves Caleb’s letter from the bin where he threw it, places it in a Christmassy, green envelope, and delivers the letter to Nola. She is so delighted with the fact that the sentiments of her anonymous pen pal exactly echo her own, that she writes a reply on fancy, gold stationary, and gives it to Arden to deliver to RSF. And thus begins a fun, anonymous correspondence between the two exes.

This romantic comedy is written as partly, typical, on-stage dialogue and action, and partly as letters—actual, hand-written letters, not texts or emails, which has almost never been used as a plot device in epistolary romance novels since the dawn of the email and texting eras. This is a short story rather than a complete novel, but the author does full justice to its homage to the 1998 Tom Hanks and Meg Ryan movie, “You’ve Got Mail.” (Which is, by the way, a remake of the 1940 movie with Jimmy Stewart and Margaret Sullavan, “Shop around the Corner,” which had another remake in 1949 with Judy Garland and Van Johnson, “In the Good Old Summertime.”) The premise of this popular, “enemies to lovers” plot is that the two protagonists can’t stand each other in person, but they fall in love via an anonymous correspondence. Neither protagonist is aware, until the very end of the story, that their beloved pen pal and their obnoxious enemy is one and the same.

For humor, this romantic comedy relies on multiple instances of slapstick. The main conflict keeping Nola and Caleb apart is that each behaves in a childishly antagonistic manner that causes them to heartily dislike each other, until they finally decide, at the very end of the story, to have a mature, honest, vulnerable conversation with each other that allows them to clear up their past, disastrous misunderstanding and move forward into the HEA that is an expected, crucial trope of the romance genre.

I gained access to this story through the Amazon Prime Reading Library. It was offered to me simultaneously in both Kindle and Audiobook format, via Whispersync. The audiobook version is narrated by two talented, voice actors, Carly Robins and Aaron Shedlock. They do an excellent job bringing this story to life.

Finally, there is no sex in this Hallmark-style, small-town romance, only a mild, passion-free kiss at the very end. There is also no cussing, no drinking and no smoking. Romance fans looking for a low-angst, G-rated, Christmas romance will very likely enjoy this pleasant, lightly entertaining story.

Aaron Sherlock and Carly Robins did an excellent job narrating this novella by Meghan Quinn. It is like a Hallmark movie mated with Shop Around the Corner (the original You've Got Mail). It doesn't have the romance scenes we usually see from a Quinn book; this is really a cute, clean, anonymous letters type story. Not my favorite ever, but there was also nothing wrong with it!

This is a short Christmas story about two people acting like scrooges. The ending was really cute. Carly Robins and Aaron Shedlock did a great job with the narration.

This is a nice little story that will put a smile on your face. and warmth in your heart.

This was the type of book you can half-listen to and you’ll get the story line. It was a cute but trite story.
The narrator was pretty good, but had a slightly slow pace and slightly flat affect at times that were noticeable and distracting.

I like that it’s simple, It’s not overly intricate and it is a very easy listen.

This was a great second chance romance with a Christmas twist. I loved the letters & the meddling senior citizens.

Nola and Caleb are cute. They are witty. They are funny. This set up is season appropriate and so much fun. Mine is the audible version and the narration is well done. I enjoy how the voice and tone is used to allow us to know the difference in the speakers. I like that we know the.mood of the speakers by the animation in the voices.

Great story to listen to during the Christmas season. Listened to this while working at my desk and it has a great little Hallmark feel to it.