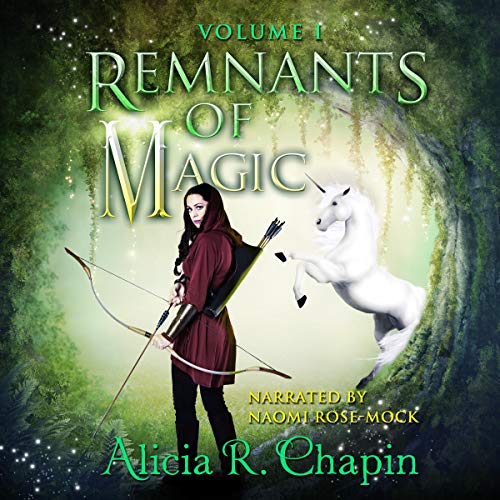 The only daughter of a retired wizard and human mother, Alexandra's a fiery young woman who's proud of her half-blood status. She's up to any venture, even when she's summoned by a foreign prince claiming only she can help him with an impending threat.

She leaves behind her beloved homeland, taking only her bow and trusty horse, Zhan. She travels to the country of Shelkite. And though she’s met warmly by Prince Alkin, she’s met with disdain by his bitter, right-hand man - Master Sword Bryan.

Through grassy foothills where her dreams seem to tell the future, through an ancient wood where the tiniest magic still lives, to the sea in search of reclusive merpeople, and to an unstable, mystical forest her company treks - learning and growing alongside each other.

Alexandra may have taken on more than she prefers to handle, but among the hardships and mounting romantic troubles, she knows she has to press on. For whether she does or not, she’s the key - either for good or evil.

What listeners say about Remnants of Magic, Book 1

I have really enjoyed the plot, the characters and even the narration but, it was a bit annoying with the long blank pauses the narrator keeps taking. If it wasn’t for that, she has a very good voice and reads the story really well, putting a personality to each character....just a shame that whoever produced the copy couldn’t be bothered to take out the yawning gaps!!
I would still recommend it as a good listen although, I can’t seem to find this Author or her book title in the search in Audible now to be able to find any follow up. There has to be a Book 2 as this book does not finish the story.

Both Nostalgic and Fresh

What I loved about Remnants of Magic was the feeling it gave me of being back in one of the beloved fantasy books of my childhood, but aged to meet my tastes as an adult. The familiar, comforting tropes had a new arrangement, zest, and adult perspective to them that I appreciated hearing at this stage in my life. The characters and their internal struggles felt very real and I am definitely looking forward to seeing the journey through to the end in the conclusion of Vol. 2. :)

In a word; magical!

Now that I have finished the book, I am eagerly awaiting the next! This book shows so much creativity and imagination and has you rooting for the characters until the end. The characters were well developed and there are many relatable moments (even though the book is fantasy!). Plenty of characters and mythical creatures to keep your attention. Author makes you care about the characters and their fates. There were twists and turns that I never saw coming! 5 stars!

This is a great story and fantasy to get lost in. The main characters experience a lot of personal development and the plot is turning into a fantastic epic! Can’t wait for the next book!

this was an amazing story, the tension and love interests have me in suspense waiting for the next book. the narrator was great, there were actually a few times I swear I heard the birds chirping in the forests.

Cannot get enough of this book! Fantastic story. Love the narrator. Will be following this series!