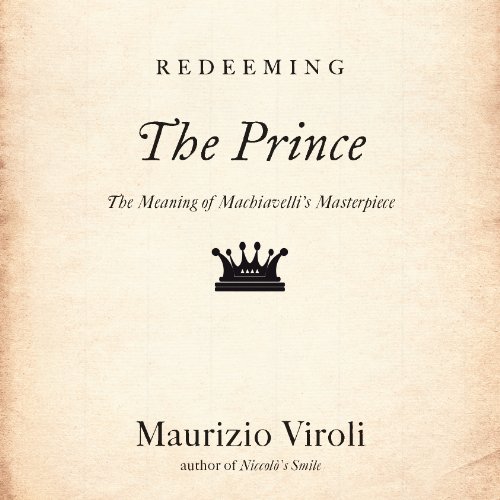 By: Maurizio Viroli
Narrated by: Chris Kayser
Try for £0.00

In Redeeming "The Prince", one of the world's leading Machiavelli scholars puts forth a startling new interpretation of arguably the most influential but widely misunderstood book in the Western political tradition. Overturning popular misconceptions and challenging scholarly consensus, Maurizio Viroli also provides a fresh introduction to the work. Seen from this original perspective, five centuries after its composition, The Prince offers new insights into the nature and possibilities of political liberation.

Rather than a bible of unscrupulous politics, The Prince, Viroli argues, is actually about political redemption - a book motivated by Machiavelli's patriotic desire to see a new founding for Italy. Written in the form of an oration, following the rules of classical rhetoric, the book condenses its main message in the final section, "Exhortation to liberate Italy from the Barbarians." There Machiavelli creates the myth of a redeemer, an ideal ruler who ushers in an era of peace, freedom, and unity. Contrary to scholars who maintain that the exhortation was added later, Viroli proves that Machiavelli composed it along with the rest of the text, completing the whole by December 1513 or early 1514.

Only if we read The Prince as a theory of political redemption, Viroli contends, can we at last understand, and properly evaluate, the book's most controversial pages on political morality, as well as put to rest the cliché of Machiavelli as a "Machiavellian."

Bold, clear, and provocative, Redeeming "The Prince" should permanently change how Machiavelli and his masterpiece are understood.

What listeners say about Redeeming 'The Prince'

The audiobook had too many references, in Italian and English, directly in the body of the text. Aside from being tiring to hear constantly, these were also narrated without clear distinction; so understanding when a quotation finished and the author's own remarks began was at times frustrating.

What was most disappointing about Maurizio Viroli’s story?

The Figure of the "Founder and Redeemer", as described by the author, is the main character of this book. The author seems to believe that Machiavelli adresses this hypothetical Figure in his book. It is my understanding that the author implies that the methods of governance analysed in 'The Prince' may actually be employed by such a Figure and that Machiavelli would readily endorse such a justification of "The ends justify the means".

Did Chris Kayser do a good job differentiating each of the characters? How?

No. Chris Kayser read as if the author was the sole character speaking throughout the book. Aside from using a distinguishable accent when reading text not in English, knowing when the author commented or when Machiavelli was quoted or when another source was used was done by the listener having to ponder on the context of what was being said.

Could you see Redeeming 'The Prince' being made into a movie or a TV series? Who would the stars be?

A documentary based on this book and narrated by Morgan Freeman would be enjoyable.

The backstory on the life of Machiavelli gives a true perspective of why he wrote 'The Prince'. In itself, the book may very well appear as a handbook to the successful oppressor, since it describes unscupulous methods employed historically together with the favourable outcomes they incurred in most cases. But when viewed from the perspective of Machiavelli himself, a man tortured by the very family he is supposed to councel due to him not being corrupt and accommodating, we see that the purpose of his book was to enlight the people to the methods of their tyrrants and spark a philosophical discussion on the actual absence of morality in the political scene.