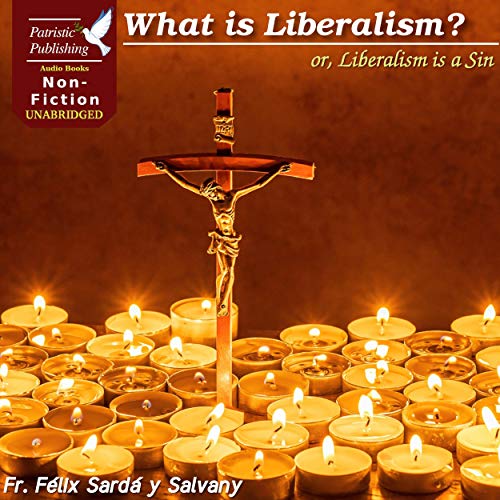 In 1886, there appeared in Spain a little work under the title El Liberalismo es Pecado, Liberalism Is a Sin, by Dom. Felix Sarda y Salvany, a priest of Barcelona. The book excited considerable commotion. It was vigorously assailed and was sent to Rome to be added to the banned book list. However, the Holy See received the book favorably, and the book remained in circulation.

Below are some quotes from the book:

"Liberalism is the root of heresy, the tree of evil in whose branches all the harpies of infidelity find ample shelter; it is today the evil of all evils." (Ch. 4).

"The theatre, literature, public and private morals are all saturated with obscenity and impurity. The result is inevitable; a corrupt generation necessarily begets a revolutionary generation. Liberalism is the program of naturalism. Free-thought begets free morals or immorality. Restraint is thrown off and a free rein given to the passions. Whoever thinks what he pleases will do what he pleases. Liberalism in the intellectual order is license in the moral order. Disorder in the intellect begets disorder in the heart, and vice-versa. Thus does Liberalism propagate immorality, and immorality Liberalism." (Ch. 26).

Liberalism "is, therefore, the radical and universal denial of all divine truth and Christian dogma, the primal type of all heresy, and the supreme rebellion against the authority of God and His Church. As with Lucifer, its maxim is, 'I will not serve.'" (Ch. 3).

What listeners say about What Is Liberalism?