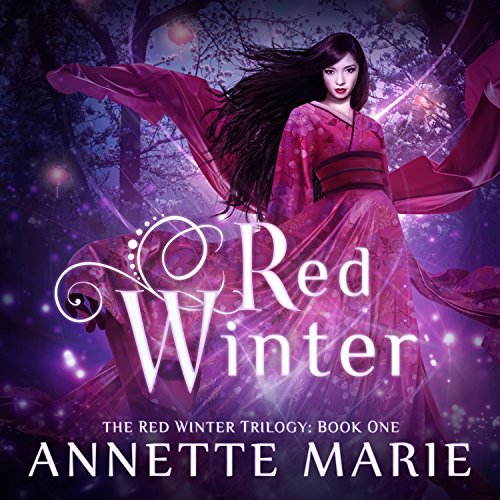 By: Annette Marie
Narrated by: Emily Woo Zeller
Try for £0.00

Emi is the kamigakari. In a few short months, her life as a mortal will end, and her new existence as the human host of a goddess will begin. Carefully hidden from those who would destroy her, she has prepared her mind, body, and soul to unite with the goddess - and not once has she doubted her chosen fate.

Shiro is a yokai, a spirit of the earth, an enemy of the goddess Emi will soon host. Mystery shrouds his every move, and his ruby eyes shine with cunning she can't match and dares not trust. But she saved his life, and until his debt is paid, he is hers to command - whether she wants him or not. On the day they meet, everything Emi believes comes undone, swept away like snow upon the winter wind. For the first time, she wants to change her fate - but how can she erase a destiny already wrought in stone? Against the power of the gods, Shiro is her only hope...and hope is all she has left.

What listeners say about Red Winter

I love all of Annette Marie's books but this one is special. I've never read anything like this before and it captivated me from the start. Had the biggest book hangover after this trilogy and is always something I go back to and listen to over and over.

very disapointing! I pre ordered this book too

What could Annette Marie have done to make this a more enjoyable book for you?

i absolutly adored her other books ! so when this was as bad as it was I was shocked and disapointed. I will be returning this ,

Emi is a kamigakari for Amaterasu. This basically means that she has dedicated her life to be a vessel for a this god-like being to be able to descend and have a presence on the Earth.

The first few hours were less exciting as we hear about how she has been keeping herself pure by hiding away in various shrines, praying, not eating anything exciting, not doing anything risky, not having friends or going near boys, etc.

She has been happy keeping herself pure all of her life, but at some point near the solstice ceremony when the kami will descend into her body, she finds out some information and changes her mind. This is where the story picks up. She starts doing more dangerous things, meeting interesting characters, learning information, and having adventures. She build allies and enemies, has to fight for her life, and has to make tough decisions.

I really enjoyed the book. I loved the characters that were introduced and their magical powers. There are two love interests, but no relationship yet. The main character is relatable (other than her initial purity), and is not making stupid decisions left and right like I have found in a lot of other books. While she’s just 18, I didn’t find her to be too immature either. (I am in my late thirties.)

We are introduced to various gods, beings, and realms from Japanese myth/religion. This was new and interesting to me. It was a little hard to follow all of the names for them because they sound similar, but I followed enough to know most of what was going on. I liked that it was different than typical angels, demons, shape shifters, etc in a lot of books. We didn’t start out knowing the relationship or allies between these beings, but learn things as we go, and it’s not always what was expected.

I really loved the author’s previous series, so I’m not surprised that I enjoyed this book too. Her books are strong in character development, world building, friendships and romance, and enough action to keep things going. The ending left off when I really wanted to keep hearing the story, but at least it wasn’t really a cliff hanger. Now I will wait for the next!

The narrator was good. I've heard her in other books, so wasn't concerned. My only complaint is that some of her male voices in this one sounded a bit like Grover from Sesame Street.

The book reminds me of red data girl an anime. There isn’t a lot of sexual tension and I feel like she tries to put it in there anyways. The story is good but the writing has a lot of rhetorical question to keep the story moving forward which makes it sound childish/simple. The reader wasn’t and didn’t have a terrible voice but I am just partial to men with deep voices. Over all not bad but not the best

I picked this story because it was read by Emily Woo Zeller(Amazing!), and the premise sounded good. It's centered around Japanese myth and folklore. Which is great if u know Japanese. eg, The names of different kinds of spirits and animals, including the words spirit and animals themselves, are all in Japanese. The kitsune (fox), tengu (crows), kami (bad spirits), Amarterasu (spirit in heaven), Shion(shrine), kamigakari(vessel for Amarterasu), soheii(guards), kannushi(priest), Miko(maidens), makoto no kokoro, amatsukami, kunitskami, onenju, the list(story) goes on and on like that. I lost touch with the story because I kept having to stop and Google what all the words meant. At the end, It was continued to the next book, which I didn't even want to read because it would be exhausting, and that is not why I listen.

You might enjoy this book if you're preteen girl.

I had to give up on this book as the hero froze in the face of oncoming death because she was overcome with powerful emotion because she saw a young man's bare chest.

I have always been fascinated by Japanese culture and mythology. With all the Kami, yokai, ayakashi, and even the oni. It may or may not be due to my childhood obsessions with Inuyasha and Naruto. This book hit the spot with everything! The culture, the mythologies, and just a splash of angst romance.
The character development was wonderful and well panned out. Emi grew up so much within such a short time. My heart broke along with hers. Even Shiro had some development, although finish I got to see that yummy fox more, but this book is about Emi.
This book awakened the things I loved about the anime Inuyasha, and did I spot some references here and there? Ears? And ahem, the Inugami?
This book was glorious! And before I gush spoilers I am off!!

After 2 hours of an overly dramatic, shrill narrator (even in parts of story where it makes no sense for that kind of reaction) and a story that is boring with no sign of getting interesting, I had to stop listening. Maybe if the narrator wasn't so awful I would try and power through hoping it will get interesting but the narrator's bad narration is grating and I couldn't stand to listen to it anymore. The story was so REDUNDANT - over and over and over again it was reiterated about what the main character's role is in life and a missed romantic attachment. Not sure why the author decided to beat the reader over the head with the same facts for so long.

The story progresses naturally and quickly (from the characters' perspective) and makes good use of Japanese culture and mythology, especially to provide interesting yet believable characters. It is enjoyable throughout, and ends satisfactorily both in terms of events and in terms of character growth, though there is still plenty of material left for the rest of the series on both of those fronts. The protagonist does try to discover the world around her and improve herself at least a little, which I appreciate, though I still found her too passive or helpless at many points during the book. The protagonist spends a significant amount of time throughout the book thinking to herself (more than I personally would prefer), but not enough to dominate the book. Sometimes this self-reflection added to the story and showed character growth, but too often it was just repetitive or didn't matter at all, occasionally even evoking disdain for her as she made obvious mistakes. In summary, this was a pretty good story, but told in a way that I personally did not enjoy as much.

Pretty flat characters. Nothing really surprised me or peaked my interest. The antagonists weren’t threatening or terrifying. The stereotypical smirking and fawning grew tiresome very fast. The story overall felt like an anime love story with nothing original or exciting to keep me interested.

Couldn't make it past the first 1/4 of the book

I thought I was reading a book about gods and spirits and magic. Instead I got hours of teenage angst as she pines over the super cute boy she likes and chats with other teenage girls about their crushes. I tried going back to this book several times but finally just gave up on it.

I wish the author would have spent more time with details of the characters, background/landscape, and the story itself.