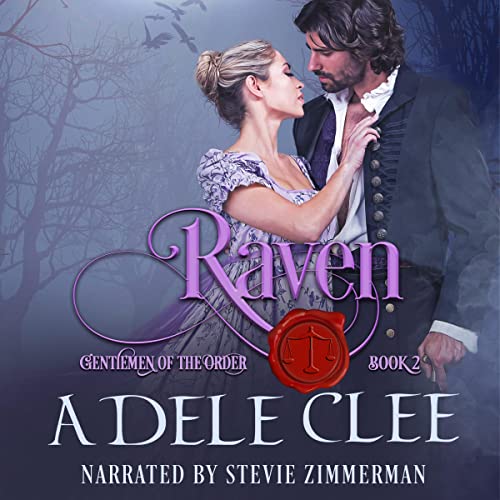 By: Adele Clee
Narrated by: Stevie Zimmerman
Try for £0.00

Meet Raven—the second of four gentlemen who work to right injustices—in the new heart-stopping series Gentlemen of the Order.

Finlay Cole deserves the moniker Raven. Bad luck and ill omens are his constant companions. Still crippled with guilt over his wife’s death, he works as an enquiry agent to distract him from the pain of the past. But his nightmares return when he discovers his next client is his first love—a woman who still holds a piece of his heart.

Sophia Adair has kept a dark secret for seven years. Protecting her sister cost her the love of her life. It cost her any hope of happiness. But now someone with evil intentions is corrupting her sister’s mind. Someone is out to abduct the poor girl, though Sophia has no notion why. Desperate for help, she turns to Finlay Cole, the only man she can trust.

Forced to spend a week together at Blackborne manor, a house that has as many secrets as its occupants, Finlay and Sophia must work to solve the mystery. But how will they fare when the old flames are ignited and desire for each other burns? Can Finlay overcome his guilt and learn to love again? Does Sophia have the strength to pull Finlay from the darkness and claim the only man she’s ever loved?

Find out in Raven: Gentlemen of the Order, Book 2.

What listeners say about Raven