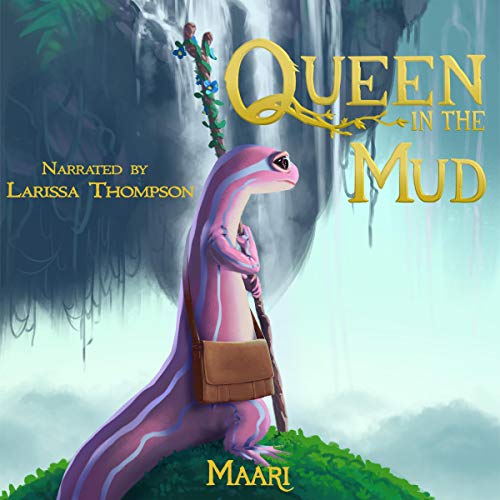 Queen in the Mud

By: Maari
Narrated by: Larissa Thompson
Try for £0.00

A girl suddenly vanishes from her world and finds herself drifting in and out of consciousness in a world of pure darkness. The only insight into her precarious situation is a prompt opening before her eyes indicating that the system failed to delete her.

The doggedly optimistic and naive teenager, Naomi, is reborn as a monster into a fantastical world governed by the rigid rules of a suspiciously game-like system; a world full of magic and danger where the familiar mingles with the inexplicable. She finds herself deep in the bizzarre, savage forests of the unclaimed lands where deadly monsters prowl in the shadows just out of sight.

After a close brush with death, any hope that this could be a lighthearted adventure evaporates as she feels real pain for the first time. The realization sinks in as Naomi comes to terms with this not being just a game; it’s her reality now.

As if coming to grips with the life or death survival situation she finds herself in isn’t enough, the description of one of her skills seems to be speaking to her....

What listeners say about Queen in the Mud

MC is a female salamander!

This is a great story without it being too heavy on the leveling mechanics.

After reading/listening to many litrpg's finding something different is great.

I will be reading/listening to all of this series without fail.

I was unsure about this because it was the only book from this author on goodreads and similar.

But its a hidden gem! Too bad there are not anymore books in this series.

The good story is nicely contained in this book though, not really an unbearable open ending, I just want more!

The MC is well done and there are some seriously interesting twists and ideas in this story. More creative than a lot of litRPG's and hero stories out there.

Bloody brilliant it was

I absolutely loved it to bits I wish there was a second book or at the very least a epilogue.

Cute story but not worth a credit. Nice narration but story itself is lacking anything special

If you enjoy LitRPGs this is a hit, plain and simple. Queen in the mud especially for the first half of the book is extremely straightforward. Frankly that is a relief. So many LitRPGs throw out about a billion mechanics that make the reader feel like he is trying to carry all the groceries from the car to the house in one trip.

Queen in the mud takes an abrupt turn in style in the middle of the book with different perspectives and a more complex world. It worked by adding in a lot of complexity after the reader has a while to understand the layout of the world and really dip a toe in. The content was typical LitRPG with some newish twists that are interesting ideas. Overall the mood was lighter which is a nice change from the typical intense LitRPG.

My main pet peeves were the repetition of stats and character sheets. Usually I will just stop listening if a character sheet recurs especially in an audiobook. IMO it is lazy and wastes the listeners time but in this case it didn't reach critical mass and the rest of the story made up for the inconvenience. Also the book has too many stats and ability terminology but again it didn't reach critical mass. Comparing each of these to the genre as a whole I would say it was in the bottom half of stat and character sheet overuse which is rampant in LitRPGs, which is quite good in perspective.

Her voice was familiar most of the way through.

I couldn't put my finger on where I'd heard her voice before for more than half this book. Finally it clicked. She narrated The Greater Terran Union Stellaris campaign on the YouTube channel 'Templan Institute'. She does a great job, though her delivery of some of the funnier moments (such as calling a flying platypus monstrosity a "Magnificent Bastard") while still funny overall, then could have been greater enhanced by a better delivery. That being said, the punch line at the end of the book made me shed a tear. It was fantastic. That's how you end abook right!

On a story aspect, it's among the more well put together litRPGs I've listened to. Though the overarching mystery aspect doesn't feel to cohesive to me. I'm a sucker for a litRPG from monster points of view. Granted she was human before, but that doesn't diminish my enjoyment much.

So far the protagonist seems intelligent. Asking questions when a normal person would, no pointless plot induced ignorance here. She thinks of solutions as fast as I do, and doesn't complain. I count the story as a success if I'm not constantly yelling obvious answers to stupid situations.

All and all, a solid addition to the genre.

LITRPG elements with a "Chosen One" story...

Pros:
*LITRPG.
*Interesting and unique build options.
*The MC discovers the world as you do.
*Relatable MC
*Brings in interesting and fun elements from other LITRPGs

I stopped listening and returned it at that point.

Plenty of good stories follow this sort of narrative path. I think that this story is done well enough if you're into that sort of thing. Please understand though that -as far as I got in the book- this is much more a "Female King Arthur" story before it's a LITRPG.

I simply have preferences for LITPRG, Namely,
*A LITRPG should be about making empowering personal choices, not a discovery of destiny.
*We should get three levels of thinking about stats: Anticipation beforehand., Thoughts at selection time. Hindsight review. (To be fair, we sometimes got two of these with this book)
*If you're going to switch narrative perspectives, all the characters should be focused on their levels/skills

TLDR: This is a fun "Female King Arthur" story before it's a LITRPG.

Not sure where its going, but I am onboard

Honestly a underated story it perfectly captured what a litrpg should be from the trials to lvling up to the interesting world that built. I will eagerly wait for book 2

This was a really great story. The progression that the character makes is believable and its fun to see an MC that is a monster. Also, the MC is a girl so we get to have a story that doesn't feel stale or recycled because the POV is fresh and the paths to progression are not the common and overdone warior/spellsword/mage trope. The story was fun and original while still serving up some of the best elements that make this genre fun to listen to. To top it all off, the narrator did a great job. Her voice was soothing and varied enough to span the characters. 1I like every minute of the story and am eagerly awaiting book 2.

this was a refreshing new addition to the litrpg genre. I can't wait to see where the sorry goes!

Beautiful! From the start a very touching story of Naomi finding herself in a different world and different body. The cover illustration reminds me of the cover of the Amiga game 'unreal' and it's tune also comes to mund with it! https://youtu.be/8NagmtM1epU

Anyone that loves fantasy or RPGlite would love this novel. you don't have to know anything about gaming and think this is an prime example on how the RPGlite novels can appeal to the border fantasy community. ready for more from Maari here and will be looking forward to the next book.

This book sucked me in. It has a lot of depth and originality. The narration also deserves praise. I'm looking forward to the next one.