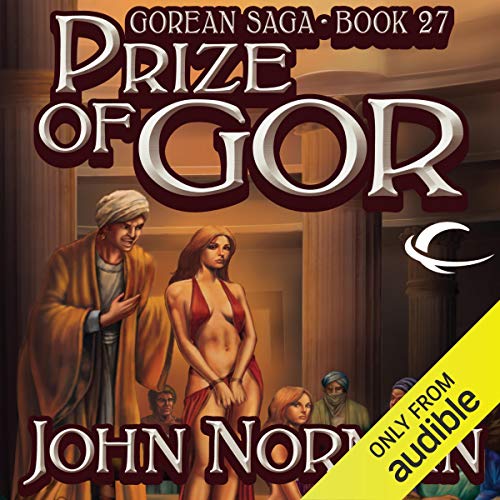 By: John Norman
Narrated by: Tabitha Marley
Try for £0.00

John Norman's epic Gorean Saga is one of the longest-running and most successful series in the history of fantasy. It is also one of the most controversial. Over the course of more than 30 books produced over a span of six decades, the series has sold millions of copies and built legions of fans unrivaled in their devotion. Audible invites you to rediscover this brilliantly imagined world where men are masters and women live to serve their every desire.

Ellen is a beautiful young slave girl on the planet Gor. Yet she was not always thus. For nearly 60 years she was a woman of Earth, but life had largely passed her by. Then, following an apparently chance encounter at the opera with a strangely familiar young man, she finds herself transported from Earth to Gor. Here she discovers the true identity of her kidnapper and his sinister motives. She is given a strange drug that reverses the aging process, turning back time itself, and once again she's the beautiful young woman she remembers from years before, so long ago. Now her adventures really begin. Men challenge one another to own her. To the victor the spoils, but who will that victor be?

What listeners say about Prize of Gor

The story is incredibly limited, very little actually happens and what does is squeezed in between endless polemic. Norman's style has a tendency towards the verbose, with every adjective having multiple versions in the same sentence, this novel is the worst offender for that. This bogs down the pace of a novel which mostly deals in vituperative rage. I listened to the audio book as I did not fancy wading through the enormous paperback again.

As to the performance, Tabitha Marley does well with it. I found some of her pronunciations odd and her attempts to do male voices bore some very strange results, yet that is usually the way with cross gender voice acting and cannot be seen as solely a faultvwith her performance

Feed this book to the Sleen

If this angry book is the reason that John Norman got blacklisted then it makes a little more sense to me. The Author is a highly educated man, a career educator, and this is a badly written book. The English/Gorean translation style goes out the window. Essays are spliced in. There are sections of narration repeated almost verbatim all through the book.

In a couple books, Tarl deals with the concept of Rape as it applies to Slave Girls. It is difficult to read, but marginally possible to rationalize. It would be something he would have to try and come to grips with, and he does so very awkwardly. In this book Rape and Gang Rape are treated as a sexual acts as apposed to a crime of violence. Even if the author wanted those scenes in the book, as acts of violence, a fade to black would have been appropriate. Rape was used as a weapon of war on in reality, particularly in WWII. But that does not seem to be the reason here. It just happens and it made me ill. This author KNOWS that rape is a crime of violence, and rape by strangers, gang rape by strangers is not something I want to read about. There is no excuse for this, Norman knows better, and he crossed the line here in a big way. There are logical errors, plot holes, characters acting in a way that is so unusual that it is hard to suspend one’s disbelief. The protagonist is so unpredictable that she comes across to me as being completely insane. It is impossible to care about her, and her dialog regresses, contradicts, and sometimes makes no sense at all.

I would not have published this book. It would have been not be censorship, it would be refusing to sell a defective product to a consumer who has waited a long time to find out what happens next. We don’t. It can’t be re-edited, it is a hopeless waste of words. This book consists of 30 hours of dialog, and perhaps 3 short scenes that are interesting, and perhaps 3 pages worth of advancement of the story line. It is an angry, badly written diatribe. I would love to write a synopsis of the plot so nobody has to plod through this mess. It would consist of no more then 4 paragraphs, that is all there was in 30 hours of non stop rambling that mattered. The characters argue about sex while being chased by enemy troops. The new characters are almost identical, it is hard to tell any of them apart, and their motivations are never made clear. The author has published his own papers under his real name. That is the appropriate way to do what he attempts to do here. He contradicts himself, makes actual factual errors in biology, changes narration styles randomly, and for the first time, some Gorean men are portrayed as borderline psychopathic sadists. Love, usually a common theme is derided and treated as an unimportant superficial issue. There is no soul to this book, just vitriol. There are virtually no LIKABLE characters, and the highlight of the book is a visit by Janice from Witness. If Kur of Gor is like this, I’m done with the series. I don’t think it will be. If you decide to read this book, feel free to scream “Feed her to Sleen!” I did about 50 times.

long but worth a listen.

I couldn't listen to it all at once for it is lengthy. It is though, well narrated. It is an interesting glimpse into the world of Gor from the perspective of a female de-aged who has had more than their fair share of life's experiences.

It was a little slow to start but the end was worth it. looking forward to the next one

worst one in the series

worst book in this series. over 90% is repetitious whining on being a slave. a great story was limited to basically 2 chapters. very disappointed.

Uptight feminist treats earth me poorly, wakes up on Gor as a slave. Fights her slavery for 2/3 of the book then has sex for the first time and is suddenly proud to be a slave. I actually skipped whole chapters and still followed the story. I was so bored that when the 1 chapter of action happened I didn’t care

She did a great job with this book, would love for her to do future gor books. She is very skilled

I do not really understand much of the criticism of this book, or for that matter the series in general. I noted one review before reading this book where the reviewer claimed that the main character wihined incessantly about being a kajira. I found this to be untrue. Quite the contrary, on the whole the main character (Ellen) loved being kajir, and stated so on several occasions. Similarly, a couple of reviewers have claimed that the book contributes very little to the overall meta-story of the series. Again, I find this untrue. While the book does not contain many of the hard-hitting action scenes as one might expect from one of the books featuring Tarl Cabot, it is not written from that perspective. Indeed this book addresses the meta-story from the perspective of someone who is not necessarily a direct actor but an outside observer of the events occurring in the meta-story. As such, one should expect that this book would be more limited in that resgard. This book does an excellent job at providing background as to how others, specifically the men of of Ar, are reacting to the sequence of events occurring in the meta-story, and providing a rich view of life on Gor in general.

The true value of this book, however, lies in its social criticism. The author makes some very frank observations of the culture in the United States specifically, and Western culture as a whole. Within these observations the author provides some very compelling arguments against, and criticisms of, political correctness, the current state of gender relations, our over-reliance on technology applied for the wrong reasons, freedom, freedom of speech and thought, our lack of regard to our relationship with nature, the dying concept of Honor, and even our lack of regard for the truths of biology.

Do not be fooled by the standard, ubiquitous , cookie cutter criticisms and often incorrect assertions of many of the reviews which are clearly made by social justice warriors attempting to suppress the author's views, while promoting an ideology of political correctness. Many of them clearly have not even bothered to read the book. When read from the point of view of its social criticism this book is an outstanding read, exposing many truths that we may not be comfortable with, and often in our current society dare not speak. Whether you agree with the authors views or not, this book is an excellent way to seek some very salient truths regarding our society. However, as the author states in the book; "There is a danger in seeking the truth, you might find it."

to much BS over and over and over, the slave crab is ok but REALLY. doesn't need to be repeated that many times7

Story of a slave

yes. interesting to get a slaves side of Gor.

the different situation she gets into

lat one where she is had by her Master

laughted at times, irreated at tmes