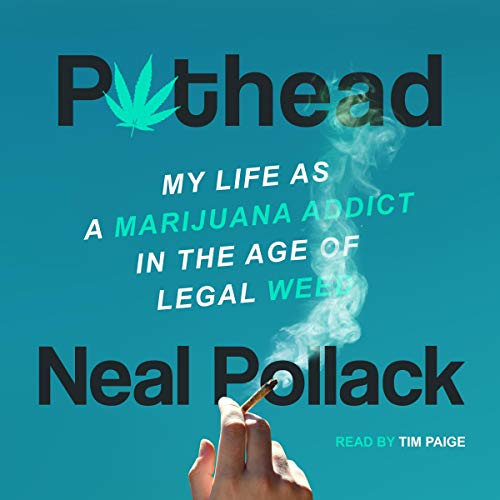 Beginning innocently enough in his 20s, Neal Pollack discovers that pot makes everything - food, music, sex - better. Getting married, having a kid, and enjoying professional success didn't tamp down Pollack's addiction. As cannabis grew stronger and more widely available, Pollack's dependence was shadowed by the expansion and acceptance of the marijuana Big Business.

By 2014, Neal was a correspondent for a national marijuana newspaper, mostly because it meant free pot. Diving into the wild, wicked world of weed with both lungs, Pollack proceeds to smoke, vape, and eat his way to oblivion, leading to terrible public meltdowns and other embarrassing behavior. After his mother dies in 2017, he spirals out of control, finally hitting rock bottom during a reckless two-day gambling and drug-filled binge, culminating in a public crack-up at the World Series in Dodger Stadium. Three weeks later, he quit.

Sober after joining a 12-step program, Neal outed himself publicly as a marijuana addict in a 2018 New York Times op-ed piece, leading to his decision to document his addiction experience as a cautionary tale for the millions of recreational users in the hazy age of legalized marijuana.

What listeners say about Pothead

a book about Neal's obsession with weed

I can't even finish this book because it's very boring. it drags on and on. with hardly anything interesting. I thought I was gonna hear something I haven't heard. all I got out of half the book was that he loved weed and he's Jewish. and his wife enabled him. then I quit the book half way. so wish I could get my money back.

if you are a big addict/stoner this book is good. i liked it because I related to the author as well

I feel inhibited to write a real review, because in Marijuana Anonymous we mostly refrain from commenting when another member shares their story. This book is a lot like a much longer version of something you might hear at an MA speaker meeting - a member talking about their personal journey. Neal's story is pretty unusual in some specifics, but I also found a lot I could relate to. I was a little confused by the transition between his "bottom" and entering recovery - it seemed like there was no discussion of making the decision to try sobriety. Also I got a little confused because the story seemed to jump back and forth on the time line a little. Overall, it is great to see a prominent story about marijuana addiction and recovery because too many people (even some marijuana addicts) don't know that it is a real thing. Thanks for sharing Neal!

Probably should have read the description first

I did listen to the whole book and it thoroughly enjoyed it. The time frames confused me at times but perhaps I wasn’t giving it my full attention at times. I am 22 years old and have been smoking pot since I was 12 about five days ago I decided to kick the habit and was looking for some inspiration while this was not exactly what I was looking for after listening to the whole thing it was definitely well worth listening to. hopefully I can avoid the same mistakes Neil made and kick substance abuse and adult media Content before I lose too much of my life to constantly trying to get stoned and fucking off relationships along the way. Thank you!

4.5 I disagree with bad reviews

Some reviews called this messy, disorganized, and selfish. While I can see why some might be put off by the nonchronological order of the book, it made perfect sense to me to categorize the impacts of addiction and recovery by the areas of life and relationships rather than by the years. The language used to describe the addiction was familiar to me and something that felt good to hear from someone else. I've been sober for 4 years now without a 12 step community so it felt nice to listen to another addict. Maybe it's time to find an MA meeting.

There is some really important and useful information in this book if you are wondering about your own habit.

This guy does nothing but complain about his wife, job, children, family, the dodgers, yoga legitimacy, gambling, I just didn’t like him. Maybe men will like him? Is this how all men secretly want to behave? God I hope not