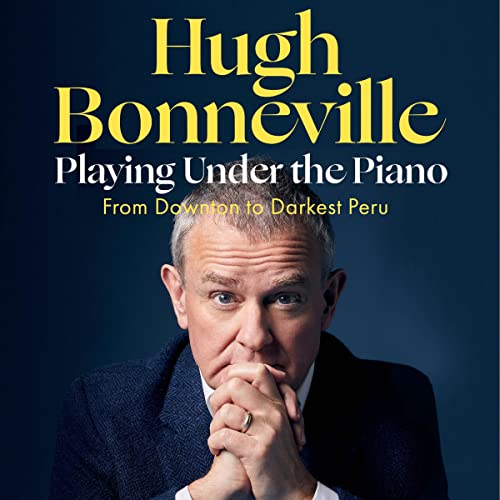 Playing Under the Piano

This exclusive recording includes 6 extended chapters that are unique to the audiobook.

Hugh Bonneville is one of Britain's most accomplished actors, whose credits include Downton Abbey, W1A and the Paddington films.

Hugh Bonneville is one of Britain's most accomplished actors, familiar to audiences worldwide for his roles in Notting Hill, the Paddington films and Downton Abbey. From getting his big break as Third Shepherd in the school nativity play, to mistaking a Hollywood star for an estate agent, Hugh creates a brilliantly vivid picture of a career on stage and screen. What is it like working with Judi Dench and Julia Roberts, or playing Robert de Niro's right leg, or not being Gary Oldman, twice? A wickedly funny storyteller, Hugh also writes with poignancy about his father's dementia and of his mother, whose life in the secret service only emerged after her death. Whether telling stories of working with divas, Dames or a bear with a penchant for marmalade, this is a richly entertaining account of his life as an actor.

What listeners say about Playing Under the Piano

I was captivated by this delightful book from the beginning. Read by Hugh, his melodious voice telling his story with self deprecating humour and honesty. I didn’t want it to end.

Hugh Bonneville tells his story with warmth and humour and I thoroughly enjoyed learning about the important people in his life and the anecdotes about well-known actors and directors. I was so disappointed when the book came to an end - I will miss Hugh’s dulcet tones at bedtime! He was like a friend telling me his life story.

I wouldn’t of been called a fan, I obviously know who he is and liked the roles he’s played so I’m not sure what made me buy the book, but I’m so very glad I did. What a delightfully funny and yet emotional book, utterly loved it!

If I can find any criticism at all of this wonderful autobiography, it is that it ended with me crying, instead of the usual " Well that was good" feeling. Superbly written and read by the fabulous author.

The best audio book I’ve listened to in ages… and cannot imagine anyone but the man himself reading it…. So easy to listen to and funny and heart wrenching in equal measure…. And that ending !!!! Highly recommended

Excellently read by the author, a full and lively account of his life to date. Especially his acting career. And no, it’s not all Downton and Paddington!

A pretty amusing account of Hugh’s life. Not holly exciting but no a bad effort

Great insight into Hugh’s career and the ups and downs of an actor. Great story telling and wonderfully read.

I knew I would love this book, narrated by Hugh Bonneville, how could I not. Engaging and entertaining throughout with some real laugh out loud highlights.