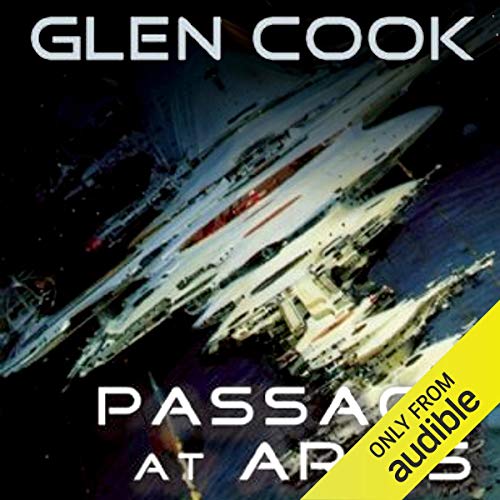 By: Glen Cook
Narrated by: Brian Troxell
Try for £0.00

The ongoing war between humanity and the Ulat is a battle of attrition that humanity is unfortunately losing. However, humans have the advantage of trans-hyperdrive technology, which allows their climber fleet, under very narrow and strenuous conditions, to pass through space almost undetectable. Passage at Arms tells the intimate, detailed, and harrowing story of a climber crew and its captain during a critical juncture of the war. Cook combines speculative technology with a canny and realistic portrait of men at war and the stresses they face in combat. Passage at Arms is one of the classic novels of military science fiction.

What listeners say about Passage at Arms

If you love Military Science Fiction, you will love this book. It is 10 hours of a battle as told by a war correspondent. One ship, and one patrol, with one battle. It is tense, exiting, and exhausting.

There is only one thing I would change to transform this book from "great" and absolutely a fun read, to an "award winning" book. But it would be a spoiler, so I will let you read it and guess what I am thinking.

This read like the Battle of Midway or the Battle of Britain from WWII. Back and forth, trying new things, sneaking up on the enemy, being surprised, inflicting damage and taking damage.

When I found out it was a book about one battle, I was not sure about it myself, but Audible's fantastic return policy encouraged me to use a credit. I am very glad I did!

I keep coming back to this story

I've read/listened to this so many times. it goes between plot and character development but tells a moving narrative of a wartime mission.

reminds me of submarine warfare

Very good story reminds me of submarine warfare in world war two. The best part was when they were hunted by the enemy and were hiding in the asteroid in climb and they blew it apart to try to get them. The narrator was good but not great.

brian Troxel made a great book even better. thanx

brian Troxel made a great book even better, thanx my friend, Hungry for more of this book(read it 2-3 times over the years)listening to Brians narration was perfect, listened to every word. perfect

space war is hell. all quiet on the hyperspace front. lotta blah blah blah. lotta As you know, Bob. ably narrated but lacks anything special in the story.

A harrowing story. Slow towards the start, but bold and exciting til the end once the action gets flowing. Worth every penny.

Many of the most important moments of the book happen "off screen" and the reader is meant to infer what happened through the reaction of the main character. Maybe it works better in print, but the narration just doesn't work very well.

Often I found myself rewinding to listen to something repeatedly, thinking that I missed a chapter or some paragraph of information, only to realize that the author simply hadn't explained what was going on. It also doesn't help that much of this vague storytelling is done with made up sciencey words and acronyms, also never explained.

I wanted to like it, being a fan of Cook's other books, but it was a slog.

ok, the first chapter is overloaded with similes and metaphors, it is pretty obnoxious and silly, but the author tones it down soon enough and we end up with a great hard science fiction story that I have apparently some how missed for decades. lots of great ideas and characters, action packed, some humor and sex, death and violence. the over the top writing style early in the book is no doubt intentional, given our main characters profession. so don't be to quick to bail out on this one, you'll be glad you stayed with it.

Not for everyone I suppose.

A good example of how a narrator can make the difference. I couldn't tell the difference between inner monologue out outer dialogue.
The book's focus on "hard science" made it a cumbersome read for me although I suppose some readers might enjoy that. I like a bit of science, but pages and pages of explanation and jargon wore me out.
The book is basically half science and jargon, a quarter exploders the human physic under pressure and the rest is plot and "war is hell" talk.