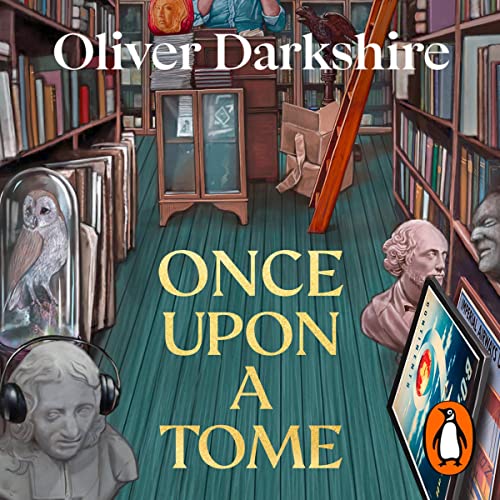 Once upon a Tome

Welcome to Sotheran's, one of the oldest bookshops in the world, with its weird and wonderful clientele, suspicious cupboards, unlabelled keys, poisoned books and some things that aren't even books, presided over by one deeply eccentric apprentice.

Some years ago, Oliver Darkshire stepped into the hushed interior of Henry Sotheran Ltd on Sackville Street (est. 1761) to interview for their bookselling apprenticeship, a decision which has bedevilled him ever since.

He'd intended to stay for a year before launching into some less dusty, better remunerated career. Unfortunately for him, the alluring smell of old books and the temptation of a management-approved afternoon nap proved irresistible. Soon he was balancing teetering stacks of first editions, fending off nonagenarian widows with a ten-foot pole and trying not to upset the store's resident ghost (the late Mr Sotheran had unfinished business when he was hit by that tram).

For while Sotheran's might be a treasure trove of literary delights, it sings a siren song to eccentrics. There are not only colleagues whose tastes in rare items range from the inspired to the mildly dangerous, but also zealous collectors seeking knowledge, curios, or simply someone with whom to hold a four hour conversation about books bound in human skin.

By turns unhinged and earnestly dog-eared, Once Upon a Tome is the rather colourful story of life in one of the world's oldest bookshops and a love letter to the benign, unruly world of antiquarian bookselling, where to be uncommon or strange is the best possible compliment.

What listeners say about Once upon a Tome

A delightful book in every way, perfect for book lovers. Narrated by the author and he does a very good job. It’s made me very curious about visiting the Sotheran’s book store!

Great narrative and the book moved along at a good pace.

The writer has such a good way of describing the world of rare book selling that you can see all of the characters clearly.

Fabulous insight into the world of the book seller.

Read beautifully by the author, wonderfully descriptive, with a wicked sense of humour and a fabulous insight into the eccentric world of Sotherans and their clientele, I would highly recommend!