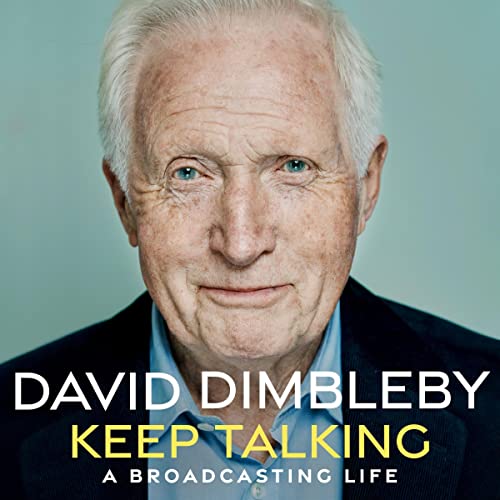 David Dimbleby reflects on his 50 year career at the BBC taking us behind the scenes of some of the biggest moments in British broadcasting.

Keep Talking is David's wry look at his own extraordinary career, and the people, events and controversies he has encountered along the way. As a broadcaster for the BBC, David had an obligation to appear a neutral observer. Now finally 'off the leash', he writes without inhibition but with his characteristic wit, clarity and insight, about monarchy, politics, and the state of Britain.

His book is enlivened with honest accounts of broadcasting from the inside—from commentating on Diana's funeral to anchoring ten successive General Election night results programmes. The faux pas, the secrets of the craft and what he was really thinking are shared for the first time. He reveals his own battles with politicians; queries the purpose and effect of political interviews; and considers the power of broadcasting—through programmes such as Question Time—to explore and amplify the public voice. Whilst profoundly British, the book ranges wider, in particular reflecting David's time in many countries, including Southern Africa and the United States.

David has been there for us at nearly every major national event of the last fifty years. Serious, outspoken and leavened with humour, Keep Talking reveals how David has seen it all—and is now telling it as he sees it.

What listeners say about Keep Talking

Dimbleby has a voice suited for audiobooks! Great storyline and narration and worth listening to again and again

Fantastic insight into journalism of the last 60 years

It doesn’t get much better than this. Dimbleby’s voice and reading of his own words and thoughts is both insightful and thought provoking. Not only his experiences but a narrative of Britain and the sweeping changes of the last half century. If you are interested in politics, journalism, royalty, social change and the story of Britain and one of our greatest journalists this is the audiobook to listen to.

I thought this book was Very interesting, and enjoyable .

What will the BBC be like in the future?

The insight David Dimbleby brings to the breakdown of our social fabric and the importance the BBC plays in providing truth in a cacophony of half truths, misinformation and government propaganda makes a sobering listen. Let’s pray the BBC survives.

I really enjoyed this book, grown up with listening and watching David on panorama and question time. Enjoyed the insights to election night broadcasting

A unique and trusted voice

This is a witty but informative memoir of David Dimblebeys time with the BBC. It is also a passionate plea for its ongoing existence.

David Dimbleby is one of best narrators on Audible and his book is a great listen - I'm sure would have been equally good to read. Is very honest about the ups and downs of BBC and in world where few defend it, his support and explanation of how it works is really good. His background about Question Time and Election days from the coal face are very listenable. One of best books of 2022

This was most enjoyable from start to finish. I liked the openness and honesty of DD and this is for anyone interested in politics and the media

Poor attempt at defending the BBC.zzzz. The most enjoyable part was confirmation that WA1 is a true life documentary😁

A fascinating insight into the world of the BBC and David Dimbleby’s account of it. Anyone interested in history, politics and broadcasting will be in for a treat.