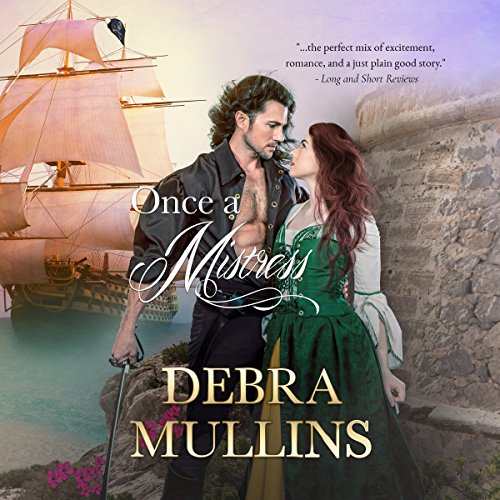 By: Debra Mullins
Narrated by: Charlotte Wright
Try for £0.00

Her love will capture the ultimate treasure - his heart.

Diana Covington is a dutiful daughter with a boring future all mapped out for her. A shipping fortune and lush Jamaican estate that will someday be hers, a husband of her father's choice. Romance and Caribbean adventure exist only in her dreams, in which the Black Spaniard, El Moreno, plays a starring role. Until she is kidnapped by the evil pirate Marcus, and her girlish fantasies quickly turn to nightmares. Alex Rawnsley's dark Spanish looks makes him the perfect choice to take on the identity of El Moreno. His mission is to bring Marcus to justice, but his heart thirsts for blood. Vengeance for his brother's murder is within his grasp when Diana's kidnapping throws a hitch in his strategy. Snatching her from Marcus's clutches is easy enough, but what to do with her now? He cannot return her home lest she be taken again. He has no choice but to keep the distracting, innocent beauty aboard his ship. In his cabin. In his bed. The temptation to make her his own grows stronger by the hour...but opening his heart to love may forever close the door on his quest for revenge.

Originally published in 1999 by Avon Books.

Warning: Contains sweeping, high-seas adventure, a feisty heroine who doesn't let maidenly innocence stop her from unbuckling the hero's swash, and a hero who finds himself walking the plank of love.

What listeners say about Once a Mistress

The story was okay, nothing sensational. The problem is the narrator. In my opinion she did a horrible job on the male voices, and none sounded even remotely like pirates. They sounded like snooty aristocratic Englishmen (which, spoiler alert, technically they are). I mean seriously, what pirate sounds like a snooty Englishman? The only reason I listened all the way through is because I was on a long trip and was only listening to help pass the time .

This is the first audio book I've listened to. I've enjoyed it. There was enough suspense and excitement to keep me interested and not dozing.

No woman is that dumb. Her dialogue made me scream out loud. Do NOT put yourself through the read!

It's the typical romance novel. Hot, anti-hero with a vendetta and spoiled, beautiful rich girl fall in love while "trying" not to fall in love. If you've read the description, you've pretty much read the book. Even the sex parts are lame. The narrator's voice sounds like she has a cold and is reading with a stuffed up nose. I can honestly say I have nothing positive to review on this. It's just bad.

I have rolled my eyes at other reviews mentioning bad narration. But, this was horrible. I'm going to download the book on kindle to read, because I seriously can't get past this girls voice. I am always hesitant to write a bad review, but felt it necessary to warn others.

I'm only on chapter 5 and this girl is so unlikeable I can hardly keep on listening.. I'll give it another chapter and see..

Honestly I didn’t think the book started out badly for a romance novel. The plot seemed to have some interest and the characters were set up pretty well too... unfortunately things got progressively more and more ridiculous. The characters became less and less realistic (even for over the top romance archetypes), and their actions seemed poorly motivated.
Anyway, it finally got to the point where I was just getting super frustrated while listening to it and so I stopped. I don’t think I’ve ever stopped listening in the middle of a book before. I’m glad I didn’t spend money/a credit on it!!

It was ok... At first it is confusing having so many opposing male characters and only one woman. Who is who?... complicated! Then it gets boring if you've read other Regency period pieces by this author. The FMC is strong which is usually appealing but she is so frigging arrogant so is unlikable. It also gets old that all these FMCs are absolute beauties that any well born man would want to marry. It is much more exciting to follow the regular or not so perfect gals snare a man... This girl has nothing to overcome, no obstacles.. it is a poor little rich pretty little girl story doesn't get her way - snore 💤.

I also never felt the connection between this couple. I'm not sure why but I didn't believe she had any passion for him. The whole sexual connection was calloused and insincere.

The pirate tale and fighting was exciting but the romance was ...blah.

like the plot and Alex but Dianna was a spoiled brat I actually had fast forward through lot of it, got tired of the complaining female character.

The narrator was great. The story was fun even if the big plot twist was predictable.