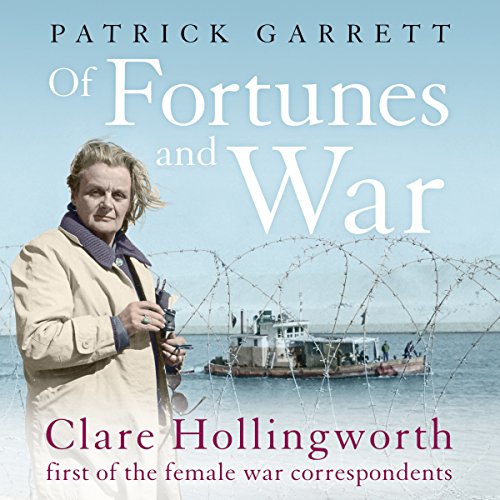 Of Fortunes and War

By: Patrick Garrett
Narrated by: Gareth Armstrong
Try for £0.00

The biography of acclaimed 20th-century journalist Clare Hollingworth, who scooped the outbreak of World War II.

After an illustrious career spanning the 20th century, legendary journalist Clare Hollingworth died in Hong Kong, age 105, in January 2017. She was famous for getting 'the scoop of the century': the outbreak of the Second World War. From witnessing the first aerial bombings against England in the First World War through Hitler's Blitzkrieg, Clare's résumé included desert war in North Africa, civil war in Greece, terrorism in Jerusalem, naming Philby as the Third Man, and guerrilla warfare in Vietnam and Borneo. She had an uncanny ability to make headlines throughout her century-long life. And although her style of journalism was very different from the 24-hour breaking rolling news we have today, the need for detailed eyewitness reporting seems even more important today as we face an onslaught of fake news and alternative facts. The story is not just about news and war, however: through access to family papers and personal accounts, her great-nephew Patrick Garrett is able to show Clare in three dimensions, explain her life and loves and show how she dealt with the pressures of life as a correspondent - decades before women were routinely accepted in this role.

"Unputdownable." (Alexander McCall Smith)
"One of the most unforgettable journalists I have ever met." (Chris Patten)
"She was a pioneer." (Kate Adie, OBE)

What listeners say about Of Fortunes and War

Patrick Garrett fills in the life and career of Claire Hollingworth with actual facts from history and found this biography very interesting, even without the need to actually know Claire. Well written and informative.