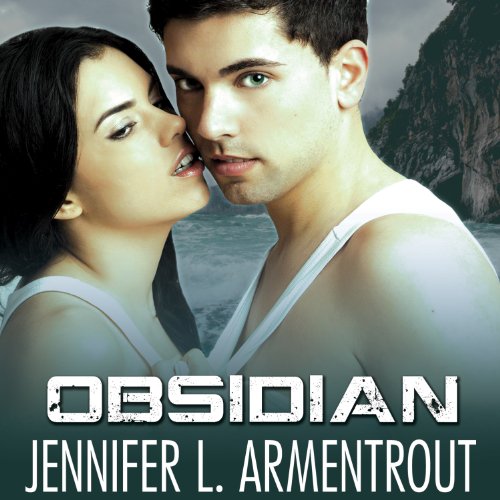 By: Jennifer L. Armentrout
Narrated by: Justine Eyre
Try for £0.00

When 17-year-old Katy Swartz moved to West Virginia right before her senior year, she'd pretty much resigned herself to thick accents, dodgy Internet access, and a whole lot of boring, but then she spotted her hot neighbor, with his looming height and eerie green eyes. Things were looking up...until he opened his mouth.

Daemon Black is infuriating. Arrogant. Stab-worthy. It's hate at first sight, but when a stranger attacks her and Daemon literally freezes time with a wave of his hand, well, something...unexpected happens. The hot guy next door? Well, he's an alien.

Turns out that Daemon and his sister have a galaxy of enemies wanting to steal their abilities and Katy is caught in the crosshairs. Daemon's touch has lit her up like the Vegas Strip and the only way she's getting out of this alive is by sticking close to him until her alien mojo fades. That is, if she doesn't kill him first.

"The beginning of Armentrout's new Lux series is a thrilling ride from start to finish. A cross between Roswell and Dawson's Creek, this series is guaranteed to hold your attention and have you begging for more." ( Romantic Times)

What listeners say about Obsidian

I have loved this series since I got back into reading and this was the fist book that I'd read from jennifer l Armentrout and absolutely loved her stories.
This series is still my all time favourite and I go back to it if I'm in a book slump.
I recently saw the books had become available on audible so I've used all the credits I had to get the first 3 books.
The narrator did a brilliant job. The only thing I'll say is she pronounced Daemon as deemon and not as it states in the books it's pronounced daymon. But it didn't worry me as the story is brilliant and I didn't notice it after a while.
Hot aliens next door, bad aliens after them with love and friendship and a bit of butt kicking. Fantastic!

What made the experience of listening to Obsidian the most enjoyable?

The story. I loved the story that Jennifer L Armentrout wrote.

She had a very nasally voice. In this story, it is difficult to enjoy, especially when she performs a male voice. She also pronounces the male lead character's name wrong. The author has said the name is pronounced Day-mon not Demon. It should really be rectified.

Narrators should check name pronunciation before they start the story because now you have six books with an incredibly annoying mispronunciation where if they would have emailed the author, it could have been corrected immediately.

This book has been described as "Twilight with aliens", which didn't sound appealing to me at all. However, based on all the 5 star reviews and hype for this book I went ahead and gave it a try. WOW did this book surprise me. It's witty, fast-paced, full of action and mystery and some very swoon-worthy scenes. I am a huge fan of YA romance books and this one is quickly rising to the top of my favorites list. This series is so addictive and fun that I've already downloaded books 2, 3 and 4. I'm going to be in listener heaven now.

Enjoyed the story but not the narrator.

If you could sum up Obsidian in three words, what would they be?

I've listened to easily over a hundred audiobooks, so I'm pretty easy to please when it comes to narrators. I've only had a few who completely turned me off to the audio version of a book; Justine Eyre happens to be one of them. I've listened to many books that Justine Eyre has narrated and every time debated whether I should suffer through her voice or just eventually read the book later sometime in my spare time. I haven't been able to finish at least three of the audiobooks that she has narrated. All of the female main characters sound nasally, whinny and I guess the best word to explain it is...constipated. I sincerely wish that the publisher would update the audiobooks with a new narrator for this series, because I will more than likely not be continuing this series in audio format.

The narrator ruined this book for me! I might buy it in print to see how it ends. I just couldn't handle her whiny voice any longer!

It's too bad that the narrator ruined this book for me. It's a pretty good story but I can't get past her whiny voice. I don't think the banter between them came across as realistic, her voice just sounded forced and fake.

What a great start to this Young Adult series. I loved how this world is like nothing I've read before. Katy was an awesome character. She was strong and didn't put up with any BS. Daemon was your typical hero who is dark and growly in the beginning but can't resist the attraction. I loved their banter and how she didn't let let him push her around. Can't wait to start the next book!

The narration is just ok for me, I like Justine Eyre, she is a good narrator but I think she sounds way to old for these teenagers. Although this didn't effect the story for me at all, I just would have chosen someone with a younger voice.

I also feel for Katy and her mom, they are still feeling the loss of Katy’s father. Moving to a new place seems to have helped her mom and Katy to she meets the neighbors….

Dee and Katy hit it off and become fast friends but Daemon who is Dee’s brother is a lot harder to like. And he sure makes his feelings known. The snarky back and forth between Katy and Daemon is funny as all heck. I love it.

This is just one of those books that makes you laugh and smile and you think to yourself, wow not what I was expecting AT ALL.

I like the narration but I am not a huge fan of it. I think sometimes the narrator sounds husky or sultry and that doesn’t fit the characters but overall I don’t’ mind it. I will keep going with the series.

This story was good, but I didn't care for the feminine girl talking for the guy - it was awful.

Would you try another book from Jennifer L. Armentrout and/or Justine Eyre?

I would try another book from this author...But so help me, if they all have the same narrator I might gouge my eardrums out through my eye sockets. I can hardly handle the narration.

What other book might you compare Obsidian to and why?

It has some of the feel you get with Unearthly and Alienated but the most obvious straight up comparison would be Twilight.

By choosing a narrator that sounds like the characters. Not so whiney, bar room seductive'ish. It sort of ruins the story when you can't stop picturing the person performing. I like to be able to have that "movie in my head" where I can imagine the characters with each nuance in the performance. Virtually impossible.

Could you see Obsidian being made into a movie or a TV series? Who should the stars be?

Yes. To be honest I kept picturing Ian Somerhalder as Daemon. I could be biased due to how well he plays the I love you I hate you I'll kill you all rolled into one type roles.

Good story if you can get past the narrator

I'm undecided on Jennifer Armentrout. I would prefer that the main character here (Katie) had less of a potty mouth - but that said, the story is pretty good. I liked the type of aliens here. Daemon (pronounced Demon? Didn't care for that) was a rather infuriating character. This wasn't a story that went where you thought it would - so that's good.

Justine Eyre was a very bad choice as a narrator. She has a bit of a whine, her voice is entirely too low, and she can't do a West Virginia accent at all. She was a terrible match for this story. And that's sad, because it definitely colored my impression of the book. This one is better read in print.