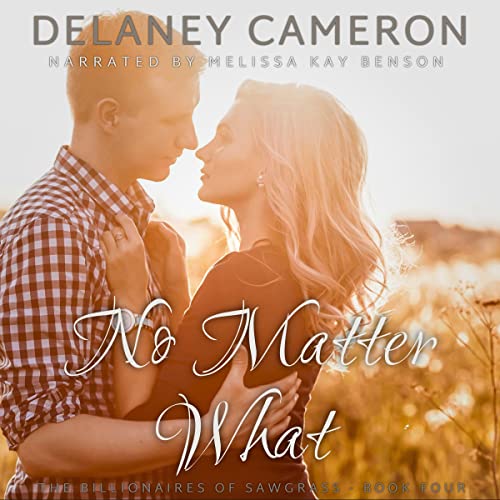 By: Delaney Cameron
Narrated by: Melissa Kay Benson
Try for £0.00

He has no problem with his stepbrother’s new girlfriend. Until he meets her.

Being a pilot is all Reece has ever wanted to do. Flying is in his blood. After graduating from the Naval Academy, he went on to have a distinguished military career before joining the family business. He took over the top spot at Diamond Jet Service when his father decided he’d rather spend his days on the golf course than run a billion-dollar charter company. The only area in his life where he lags behind the curve is finding a soulmate. His sister loves to tell him that he’s good at everything except love. He didn’t believe it until he was introduced to his stepbrother’s girlfriend. That’s when he realized the heart has a mind of its own.

She has a big problem with her boyfriend’s stepbrother. Until she gets to know him.

Robin never thought leaving her sunglasses sitting on the counter at the dry cleaners would lead to finding the man of her dreams. Along with being kind, dedicated, and scary-smart, Wade isn’t put off by her background or lack thereof. It’s too bad his stepbrother is the notorious Reece Diamond. Robin might have dismissed the rumors surrounding the playboy billionaire if she hadn’t heard a firsthand account of his jerk-worthy behavior.

As the saying goes, there’s no smoke without fire. Crossing paths with the hotshot pilot is inevitable. Hopefully, it’ll be later rather than sooner. Robin has no use for men who make a career out of playing the field and don’t care how many broken hearts they leave in their wake.

A story about first impressions, first loves, and everything in between.

What listeners say about No Matter What

[Book 4 in the Billionaires of Sawgrass series has fun little cameos of characters from the previous stories, but can be read as a stand alone.] If you're like me & normally don't care much for love triangles, no need to worry - this isn't the classic torn between two lovers kind. It's actually handled as it should be. There's never a point where either protagonist does anything dislikeable Robin is in a developing relationship with Wade that has gotten meet the parents level serious. While there, she also meets Wade's stepbrother, Reece, who she knows by reputation as a playboy & dislikes because of it. They both feel a degree of charismatic attraction when they first meet, but Robin dismisses it as the reason for Reece's reputation, & Reece recognizes that it's inappropriate, so it goes no farther. Robin's also keeping a truly awkward secret from Wade that she's trying to figure out how to tell him, but not to be outdone, Wade's got several of his own that he has yet to spring on her. You wonder which of these things is going to impact them first. Instead, what hits the happy couple is a promise that Robin made to her best friend years ago. A promise that she will keep - no matter what! The story is immediately & totally engaging. The pace is gentle but steady. And the characters are well developed & easily likeable. Robin has issues from growing up as a foster child, but they're very sympathetic. And Reece is a stand up kind of guy - though he's not a saint & does flirt a bit with temptation. It has great supporting secondary characters as well. Reece's Aunt Leigh is a highlight, despite her opinionatedness, and made me laugh out loud several times. Kait is an ideal best friend. Sylvie's snarkiness is also fun. And Owen is heartbreakingly adorable. The happily-ever-after is one that encompasses all of our favorites & is thoroughly satisfying. The story is one of Delaney Cameron's best - and as much as I love all her books, that's really saying something! 😊 *Romance level: passionate kisses, nothing graphic