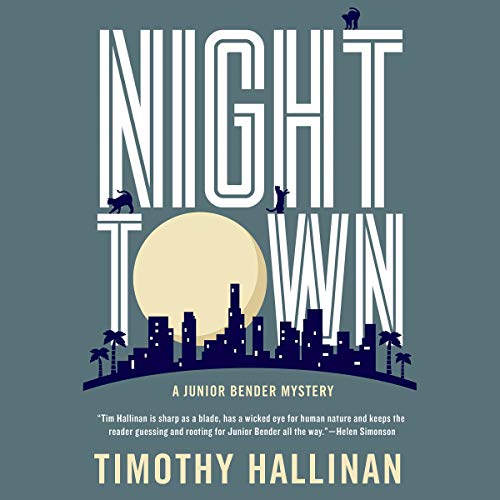 By: Timothy Hallinan
Narrated by: Peter Berkrot
Try for £0.00

Reluctant P.I. to the perfidious, Junior Bender, may be LA’s smoothest operator but when he breaks one of the cardinal rules of burglary (don’t take scores that you’re being paid way too much for) he finds himself once again on the wrong side of, well, the wrong side.

Los Angeles burglar Junior Bender has a rule about never taking a job that pays too well: In the criminal underworld, if you’re offered more money than a job is worth, someone is going to end up dead. But he’s bending his rule this one time because he and his girlfriend, Ronnie, are in desperate need of cash to hire a kidnapper to snatch Ronnie’s two-year-old son back from her ex. The whole thing is pretty complicated and has Junior on edge.

The parameters of the job do nothing to calm his nerves. A nameless woman in an orange wig has offered Junior 50 grand - 25 up front - to break into the abandoned house of a recently deceased 97-year-old recluse, Daisy Horton, and steal a doll from her collection. Junior knows no doll is worth 50K, so he figures there must be something hidden inside the doll that can get him in a heap of trouble. It doesn’t take long for Junior to realize he’s not the only one looking for the doll. When an old friend ends up murdered, Junior decides he will stop at nothing to figure out who the woman in the orange wig is, and why she wants the doll badly enough to leave a trail of bodies in her wake.

“Nothing puts a smile on my face or chuckle in my heart like a new Junior Bender book. Always fresh and ever insightful, Hallinan delivers pleasure...in its purest form.” (Tim Tigner, author of Pushing Brilliance)

"Everybody's go-to burglar in LA, takes on another job that doesn't smell right - it fairly reeks of talcum powder - and lives to regret it early and often." (Kirkus Reviews)

"Narrator Peter Berkrot is the perfect match for this story. Against his better judgment, the professional thief Junior Bender undertakes a questionable assignment only to find that he was probably correct in his initial assumption that it was too good to be true. Berkrot allows the smart and funny writing to shine and doesn't force the humor. In particular, his narration of the witty banter is well timed. He helps to bring alive the many larger-than-life characters who range from Los Angeles crime bosses to a teenage girl hacker. Considering the large number of characters, Berkrot's seamless depictions are no mean feat." (AudioFile)

What listeners say about Nighttown

Juniors back on top!

Having been listening to this series from the beginning, I felt that the previous instalment seemed slightly off-kilter, but now everything is back on track! Again mixing golden era mystery with the modern day story, all revolving around the dark and enigmatic Horton House. Many ‘old favourite’ characters also make appearances. Again, as ever performance is stellar! Absolutely recommend.

If you enjoy this series then you'll enjoy this book. An absolute pleasure to listen to.

Look, don’t even think about it. Just buy the book. No, wait, scratch that. Buy all the books. Mr Hallinan has three different series- they’re all fantastic. Junior Bender & Co are flawed and wonderful, and Mr Berkrot is a mesmerizing vocal talent. You will not regret it. Promiae.

better than I expected

I was unfamiliar with the author and was pleased with the story and presentation. The historical facts woven in was very well done and I learned something along the way

Hallinan is intelligent, writes well, and creates interesting characters. Good plot, and humor thrown in the along the way; plus some wonderful film noir atmosphere and sentiment.

great characters, enjoyable repartee. Hallinan just keeps getting better. Only disappointment was it ended. so much fun

My only complaint is that I have to wait awhile for the next Junior adventure.

No progression in the storyline