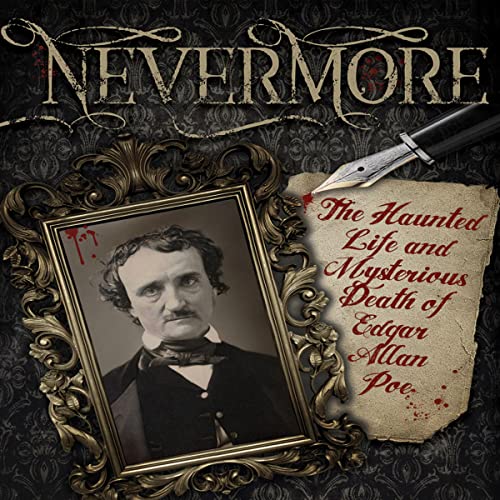 By: Troy Taylor
Narrated by: Darren Marlar
Try for £0.00

There are very few among those with a love for the supernatural who don’t also have a passion for Edgar Allan Poe. Poe wasn’t simply a melancholy author who wrote about premature burials, sinister black cats, and talking ravens; he was much more. If you’ve ever read a modern mystery or horror novel, you can thank Poe. If you’ve ever read a book like this one—or any of author Troy Taylor’s books of true stories of the unexplained—the influence of Poe is undeniable. Poe invented the modern mystery story, mostly invented science fiction, and was the first writer to take the horror stories of the Gothic era and set them in modern times, starting a trend that continues today.

With a lifelong interest in Poe, Troy Taylor decided to take his own look at the mysterious and macabre writer, his tragic life, unexplained death, and lingering hauntings. He invites listeners along to delve into the strange and bizarre world of Edgar Allan Poe, from his early life to his tragic marriage, his insane grief, his dramatically failed career, his links to an unsolved murder, and the mystery of what happened to the writer in the five days before his unexplained death.

Even more than a century and a half later, no one knows what happened to Poe before he was found delirious on the streets of Baltimore, Maryland—or what killed him. Why did he disappear and then show up in an incoherent state, wearing another man’s clothes? Where did he go when he vanished and who was the mysterious “Reynolds” that Poe whispered about in his dying breath? And, perhaps strangest of all, does he haunt the mysterious graveyard where his body is buried? And who is the stranger who appears at Poe’s grave each year on the anniversary of his birth, leaving roses and cryptic messages behind?

This is a tale of mystery and madness, real-life horror, and the supernatural, and it’s a book that you don’t want to miss!

What listeners say about Nevermore

Incredibly informative and interesting. Very entertaining in tone, i listened to it in one sitting! Darren narrates this wonderfully and keeps you engaged. I learnt much about Poe and his personal life that I hadn’t read elsewhere. Definitely recommend this audiobook.

While listening to this story, I learned a lot of new things about Mr.Poe. I have been a huge fan of his work ever since middle school. I love how his works reach a realm that a lot of people could never imagine, the story of his life is amazing. It saddens me that it took years before he got the recognition he deserved.

Author Troy Taylor provides a moderately interesting account of the life and mysterious death of Edgar Allen Poe. There is nothing new here, except, perhaps, the author's opinion on the circumstances surrounding the poet's death, an opinion that is reasonable and well thought out. The narrative tends to drone on in places, but I've listened to worse.

Narrator Darren Marlar is obviously not possessed of a liberal arts education, stumbling as he does on many of the most well known names in English literature: Prospero, (Pros-pair'-oh) Dupin, (Doo'-pin) Jean Valjean, (Jean Val-jeen) Amontillado, (A-mon-til-a'-do with an L sound instead of a Y)) and shockingly, even such well known names as Alfred Lord Tennyson, which Marlar renders as Tenny-son. Rhymes with Penny-son. There are many other missteps, such as lambast and, weirdly, "dropping" eyelids. Surely the word was "drooping". His bloopers are simultaneously amusing and unbelievably bad.

Easy to read and listen to, great story!

Easy to listen to, well written! A different way of thinking about how Edgar Allan Poe lived his life and fascinating theories about how he died.

I would highly recommend this book to anyone interested in Poe’s life and mysterious death. Troy Taylor’s books are well researched and full of historical detail without becoming boring. You couldn’t ask for a better narrator. Darren Marler has a great voice for this reading. As a listener of both Troy and Darren’s podcasts, I noticed that even the cadence of Darren’s reading matches the cadence of Troy’s voice in his podcast. I highly recommend this audiobook if you love Poe, history and mystery.

A figure as dark as a raven's beak

I loved memorizing "Annabelle Lee" in junior high; I loved the rhythm and the rhymes. Later, I learned Poe defined the short story as a work that can read in a single sitting, and I read or listened to several of them. That's all I knew about Edgar Allan Poe.

Whether I gain or lose respect for this classic American author is not a reflection on this biography. Mr. Taylor has a written a scrupulous history of the man, in the sense he seems to include all facets of the man but doesn't judge Poe's character. And Mr. Marlar's reading propels the chapters forward without melodrama or vocal editing.

Thank you both for opening my eyes and ears and keeping them open.