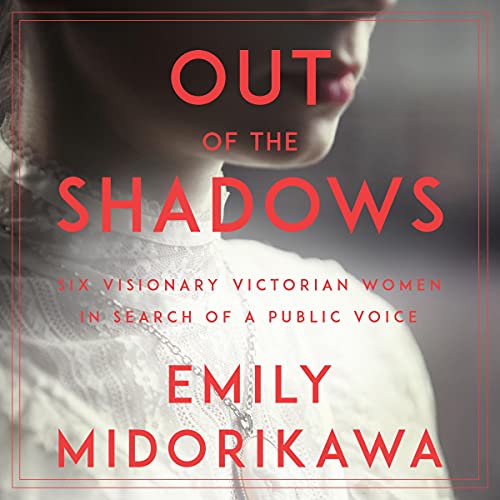 Out of the Shadows

By: Emily Midorikawa
Narrated by: Rachael Beresford
Try for £0.00

Queen Victoria's reign was an era of breathtaking social change, but it did little to create a platform for women to express themselves. But not so within the social sphere of the seance - a mysterious, lamp-lit world on both sides of the Atlantic, in which women who craved a public voice could hold their own.

Out of the Shadows tells the stories of the enterprising women whose supposedly clairvoyant gifts granted them fame, fortune, and, most important, influence, as they crossed rigid boundaries of gender and class as easily as they passed between the realms of the living and the dead. The Fox sisters inspired some of the era's best-known political activists and set off a transatlantic seance craze. While in the throes of a trance, Emma Hardinge Britten delivered powerful speeches to crowds of thousands. Victoria Woodhull claimed guidance from the spirit world as she took on the millionaires of Wall Street before becoming America's first female presidential candidate. And Georgina Weldon narrowly escaped the asylum before becoming a celebrity campaigner against archaic lunacy laws.

Drawing on diaries, letters, and rarely seen memoirs and texts, Emily Midorikawa illuminates a radical history of female influence that has been confined to the dark until now.

What listeners say about Out of the Shadows

I wasn’t prepared for this! Out of the Shadows should be on the wish list of any vociferous reader. It will challenge your preconceptions of Victorian women with a cast of characters that are stranger than fiction. Meticulous research combined with a fluent pen and a touch of wry humour creates a thrilling sense of affinity with these extraordinary women. They convinced the world they could communicate with the dead, accumulated wealth and admirers, held political and financial power, spoke to gathered thousands and even tried to run for president… but how did they do it? And could they keep it up forever…? You”ll have to read this to find out!!