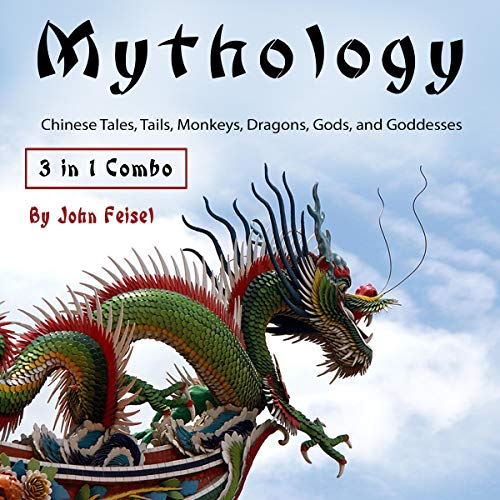 By: John Feisel
Narrated by: Ric Chetter
Try for £0.00

This is a three in one bundle. The following books are in this bundle:

Book 1: Indulge in the crazy, mystical, mythical aspects of Chinese folklore. You will listen about the most basic background information, the setting, the time period in which these tales were created, and so much more. Among others, you will become familiar with things like:

Book 2: These amazing Chinese myths include many stories, which could teach you moral lessons and entertain you at the same time. Become fascinated by the epic tales from ancient, oriental regions, such as:

Book 3: You are in luck, because you are about to be entertained by some of the most engaging, supernatural stories from Chinese mythology. These conveniently include but are not limited to:

What listeners say about Mythology

Lots of information and stories, it's more like a combination of fiction and nonfiction. Personally, I liked the fiction side of it, because the stories contained morals, and they were based on some deeply rooted beliefs from the ancient East of the world.

These are all of the books in the series. Wow. Talking about a great deal for your credit. Yes, I liked the narrator, and yes, I also liked the stories and the background information.

I recommend this one because it's the best deal for your buck. If you buy it at full price, it's less of a good deal of course. But still a nice book.

Very good book, if you ask me. The stories about the monkey who became king, the gods and goddesses, and the historical information about the Chinese culture during the time when they believed this stuff... all very good. I have no other words for it. Get it if this is up your alley.

This book does not reveal its source. Who is John Feisel? What authority does he have for writing this. The text keeps talking about the present China but never references anything from World War I I or after. At one point the author says he was present at 1917 meeting in Peking. The text sounds like it was cribed from some anti-Chinese British or American imperialist missionary. Should not be sold as providing any serious knowledge of Chinese history or mythology. It itself is mythology.